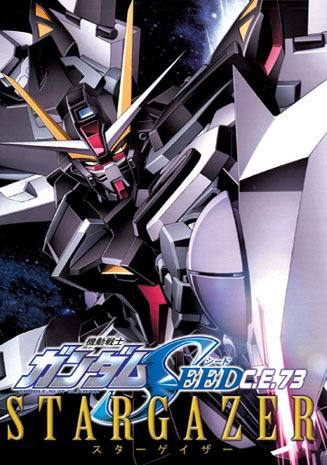 If you're looking for anime similar to Mobile Suit Gundam SEED C.E.73: Stargazer, you might like these titles.

Both main characters are similar (Clare and Sven) as they became soldiers since childhood and went through inspiration and tragic pasts (the deaths of their parents) in different ways (Clare-Teresa and Sven-Science) and are part of the organization whose goal is to extinct races (Organization with Half Human Half Yoma against Yomas/Awakened Beings and Earth Alliance/BlueCosmos/Logos/Phantom Pain with Naturals and Extended/Biological CPUs against Plant/Zaft/Coordinators) and both would later betray them at the end. Sometime during the story, they form bonds with other beings (Clare-Raki and Sven-Selene) whom will change them forever. Both shows contain dark, suspense, seriousness, gore, and sword fighting. The only difference is that in Claymore, it involves demons, powers, and ancient weapons whereas Gundam Seed CE 73 Stargazer involves Mechas, space, ships, guns, and other mecha melee weapons and with no powers.

The Earth Sphere had lost its previous governing structure, and a new world was created under new systems of government. While a temporary peace had arrived, the seeds of a new conflict were being sown in the Mars Sphere, far away from Earth.

Learning about the world from her journey to Earth, Kudelia founded Admoss Company to strive for the financial independence of Mars. While inspecting a mining site of halfmetal, Orga Itsuka, leader of Tekkadan hired by Admoss as guards, senses an attack from a new enemy and heads out to confront them, along with Mikazuki in the mobile suit Gundam Barbatos Lupus.