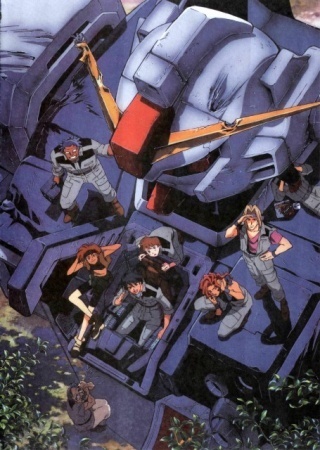 If you're looking for anime similar to Mobile Suit Gundam: More Information on the Universal Century, you might like these titles.

The year is 2167 and mankind has populated Mars. Somewhere on the Red Planet in a hidden lab the Martians are developing a new weapon known as "Idolo", which incorporates the mysterious mineral Metatron -- a combination that causes Idolo to become frighteningly powerful and gain a mind of its own. Lieutenant Radium Lavans is assigned as its test pilot, but the Metatron's power slowly consumes him and he begins to walk the path of destruction and madness. Will he be able to break free from its stronghold, or will it end in a bloodbath that consumes both the Earth and Mars?

The year is After Colony 196. A year has passed, and peace between Earth and the space colonies is still a reality. With no need for weapons in a time without war, the majority of the Gundam pilots have decided to destroy their mobile suits by hurling them into the sun. However, one girl by the name of Mariemaia Khushrenada, daughter of Treize Khushrenada, threatens this peace. With the help of her grandfather Dekim Barton, Mariemaia has kidnapped Relena Darlian and plans for total domination. The Gundam pilots are the only force standing in Mariemaia’s way, but will they be enough to stop her?