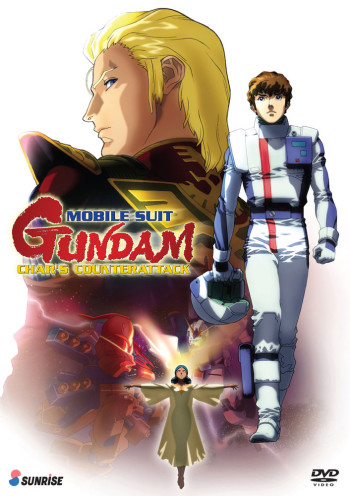 Like a maelstrom, Mobile Suit Gundam: Char's Counterattack arrives in a rush of noise and activity. A space battle is in full swing five minutes in with Amuro Ray and Char Aznable enemies once more. Char wants to send the Earth into a nuclear winter to preserve it at the cost of human lives; Amuro, understandably, cannot fathom a more horrific plot. Below, on Earth, people are scrambling to escape on a limited number of shuttles with limited seats.

Thus, Yoshiyuki Tomino rounds off the themes he developed through ninety-three episodes of television and brings them to a punchy conclusion. While previous Gundam series pore inconclusively over humanity's boundless stupidity, selfishness, and shortsightedness, Char's Counterattack is the much-needed affirmation that it doesn't matter. It attempts to assert the real value of the human race despite all its vices, which is as brave an approach as it is fascinating. Debate usually revolves around the human potential to evolve and the common sense of letting the race progress organically rather than engineering it through conflict.

I only wish the framing of said philosophies were subtler. In a reversal of Zeta Gundam's approach of implying absolutely everything, the characters in Char's Counterattack engage in obvious discussions that leave little unsaid. Fans may forgive Tomino's 'THIS IS WHAT I FEEL' approach as they remember that his strengths have never included dialogue. Moreover, this is a movie focused on bringing things to a definite end rather than revisiting old debates in detail. Its bluntness could be viewed through rose-tinted glasses as a convenient tool to shortcut fluff - a triumph of functionality over flare. Even if not, the movie is still essentially an evocative and fulfilling finale worthy of the Universal Century shows.

Char's Counterattack has aged noticeably. For its time, this was an admirable effort of fluid, dazzlingly choreographed action and plenty of environmental detail. However, I'm surprised by how toy-like the mecha look these days despite the higher budget. The movie somehow regresses the hard, mechanical look of Zeta Gundam to a more rounded, colourful appearance. For example, the Nu-Gundam's brown/white/black combination looks tacky rather than imposing.

Michael Kopsa reprises his role as Char Aznable and he moved me. Also, viewers fond of orchestra will find a glut of it in Shigeaki Saegusa's emotive score.

I'll begin with the bad. Some of the secondary characters such as Amuro's assistant Chan Agi feel roughly conceptualised, probably because this presents their only appearance in the franchise. Even worse, others develop in such artificial leaps as to actually border on the insane. Consider Quess Paraya, a special new recruit to Char's army who becomes infatuated with him with bewildering haste. She takes every opportunity to act the spoiled, petulant bunny-boiler, often soiling the mature narrative with offensive stupidity. Generally, there's something incongruous about the secondary cast, who play their parts frantically without leaving any kind of impression.

Luckily, the staple cast of Amuro, Char, Mr. Bright and the like deliver masterful performances to cover up the cracks. Char, for instance, has undergone a cyclical transformation: a vengeful man in MS Gundam who sneeringly sent his best friend to die for political gain, he nonetheless puzzled all by turning into a silent, observant godfather figure in Zeta Gundam. Well, the Char in this movie has reverted to his former self as a shameless manipulator brimming with superiority and is undoubtedly the single strongest element of the movie. He reaches a level of mesmerising that almost puts him in a class with some other ruthlessly ambitious blond guys I know - Reinhard von Lohengramm (Legend of the Galactic Heroes) and Griffith (Berserk).

Amuro, on the other hand, returns like Batman - minus the cape and rumbling voice but with all the grit. The fearful novice has faded, leaving in its place a man with grim determination and a lust for justice; he has dispensed with questions and is ready to deliver answers. I once empathised with his traumas and admired his courage, but in this movie I might have experienced one or two moments of awe.

Mobile Suit Gundam began as a tale of unlikely heroes and eventually became an analysis of Amuro and Char as opposing ideologues. Later, these two came to represent Gundam's potential for subtlety and intelligence (until watching MS Gundam I didn't know the franchise had either). Zeta Gundam took a different tack, putting a microscope to the conflict in order to focus on the nitty-gritty motives of the actors. Despite its superior narrative approach, Zeta Gundam also felt stiff and distant. Char's Counterattack returns Char and Amuro to their juxtapositional roles in an action-packed debate about the future of humanity - here, thrills collide with intellect to elevate Tomino's UC works to the status of an epic.

Well, I personally felt that this movie was conclusive, but felt more like a conclusion or some extension to the original series, and not really that well connected to Zeta and Double Zeta. Then again, this was the intention but I felt this movie could have used some of the main characters from that series or give us an update on Camille, Fa, and Judau, though there are other materials out there exclusive to Japan on what happened to them. Since the movie really has no direct connection to Zeta or Double Zeta, I don’t feel it’s really required that you watch those series, but I recommended you watch the Mobile Suit Gundam trilogy to understand the foundation of the rivalry between Char and Amuro. Resuming characters that play a significant part are of course Captain Bright, his son Hathaway, Bright’s wife’s former fiancé Cameron also plays a part as well. New additions for this movie are Nanai Miguel, Char’s right hand woman and Quess Paraya, the daughter of a Federation politician who has teenage issues and has erratic newtype abilities. The movie is reasonably paced and the characters all have their use. Granted the new characters do stand out, I just don’t think they were worth sacrificing some other characters over.

In addition to this movie going back to its roots with the Char and Amuro rivalry, the style and design of the mobile suits, specifically the Nu Gundam, Nu being N-U gives that impression as well. The current Gundam’s style goes back to its roots with the more blocky design rather than the aerodynamic frames that were present in Zeta and isn’t really as heavy packed as the Double Zeta. A notable difference is that it breaks the tradition of the red, white, and blue color scheme to a black and white one. With the Nu Gundam comes a new kind of material that is meant to go with the newtype abilities called the Psycho Frame and the addition of funnels also gives Amuro the chance to use those abilities at their fullest potential as well.

The suit Char has this time is the Sazabi, also reverting back to his iconic red scheme. The Sazabi is more cylinder like and kind of goes back to the bulkier and bloated design of the Zakus. The battles are more intense than ever with the heavy fire power and the potential of nuclear weapons being deployed by the Neo Zeon. There is more of a risk factor to the fights that make it more realistic and reasonably paced, but yet exciting. The character designs for the most part are still in tradition and faithful to the original, but presented in a new quality of resolution that really compliment the updated costume designs. Char’s design is quite unique. He’s more muscular looking and he’s more dignified, but yet still recognizable.

Well, the roles of Amuro, Char, and Bright are still respectively reprised by their respective seiyuus throughout the lifespan of the franchise and still pull off their roles as if they never aged a day. Anything I had to say about their roles in previous installments can be said here as well. For the dub, this came out before Zeta got licensed in America so some of the roles are reprised by the dub actors from the TV series as well such as Brad Swaile is still Amuro. I personally thought the dub was excellent in its own right.

The music is constantly intense. Not really as militaristic as Gundam soundtracks, but enough to pull you into the battlefield of space. The ending theme Beyond the Time also truly reflects the nature of the ending of the movie.

I wouldn’t call the movie fan service, but is truly meant for fans of Gundam because it’s really what I may call the symbolic ending to the original Gundam series. I wasn’t really that disappointed with Char’s character, but I think they could have built things up much better. But I guess I have to find other material that is either in manga or game form to get what I’m looking for. For what it’s worth, I do feel delighted this movie does pay homage to the original Gundam in its own right, but I felt they could have done some other things with it to make it more complete and balanced with the other series, but I guess they really wanted to make this movie distinctive with the newer cast.

Conceptually, this movie is fantastic. However, in execution I feel it falters.

Touted as the end of Char Aznable and Amuro Ray's rivalry, it delivers but only just. Large amounts of the movie's run time is instead dedicated to Hathaway, Quess, and the incompetence of the E.F.F. Now I don't hate this, in fact I think it's fun exploring the corruption of the E.F.F, however, Hathaway's arc is midly infuriating, and Quess's even more so.

Quess is a character created for you to hate. And well done on Tomino's part as I actively wanted to turn the movie off whenever she was in focus. I can't help but feel her and Hathaway's screen time would've been better spent elsewhere.

Where else? In developing Char. I understand there are reasons people point to in Z Gundam for why the character takes another 180 into wanting to comit death by cop, but not showing that anywhere and instead leaving it to the audience to infer is this movie's greatest misstep. It doesn't feel natural and I'm left wondering why these begrudging friends from Z Gundam are even fighting outside of "Big movie!!! Big stakes!!!".

At the end of the day, it's fine. It has good action, amazing MS design, and a fun soundtrack. Story wise, though, I feel the Beltorchika's Childern manga provides a more satisfying one. While barely different the changes it makes to Chan and Quess make Hathaway's arc a lot more enjoyable.

It pains me to rate this at anything less than a 10 when it comes to Mobile Suit design as this movie has my favorite MS looks in all of UC, maybe in all of Gundam. Alas, the more I think about the movie, the more disappointed I become.