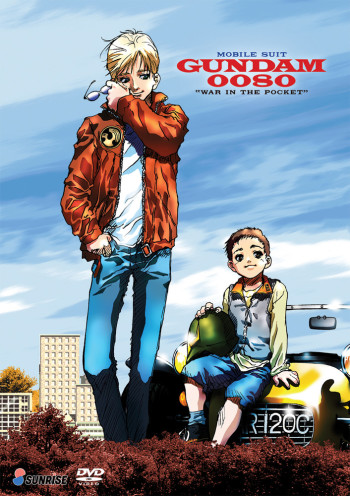 War In the Pocket (WITP) is one of the most polarized additions to the Gundam franchise. You can either love it or hate it; there is no way you will just find it average.

Assuming you are aware of how the timeline of the show goes and have read my review of the original show, so I won’t have to repeat myself, this is how it goes. WITP was created after Char’s Counterattack, which was also the point where the Universal Century lost its appeal. Before Tomino went on making lukewarm continuations and rehashes thereafter, he offered some nice side stories, the first of which is the present one. It takes place between the first and second season and revolves around the lives of minor civilians and low ranked pilots.

This is the major appeal of the side story. While the main storyline was always about elite pilots, world changing events, and the destruction of entire cities, WITP focuses entirely on the minor characters experiencing the war. We get to see how everyday, non-elite people live by without ever being distanced from what is going on around them. This in effect makes the cast to behave in a lot more realistic and down to earth way, but at the same time doesn’t have epic battles and mad piloting skills. If you are a fan of characterization, you will love how realistic they feel without plotting to change the world every ten minutes. If though you are watching Gundam for the poser action, then be ready for disappointment, since you will get very little of that.

There is still a lot of idealism regarding war, but it’s presented in an entirely different way through the eyes of its average characters. One kid for example will consider war to be cool because… well, he is a kid and all kids think it’s cool. There is a minor soldier who can only brag by telling lies of how awesome he is. There is a woman who despite her goal to aid her side to win the war still doesn’t forget to look for some love and romance. All that play out in a very basic but honest way, which makes them quite interesting for being… simple. Of course for the same reason they are hardly as memorable as Amuro or Char, since they are not overreacting all the time and don’t have crazy goals. Still, as characters they are very fleshed out despite their simplicity.

The pacing is definitely slow and dull, since it doesn’t have much of an epic build up. Most action scenes even feel unnecessary and even some character interactions play out rather boring. The best part is definitely its extremely tragic finale, where pretty much nobody gets what he wants exactly because they are all minor players inside a planetary wide war. It shows their weakness and inability to change anything and leaves you emotionally torn for seeing what a nasty effect war can have even on everyday people.

It is also quite nice in its production values for the time it was made, which further helps you to emerge into the atmosphere. It may not look so awesome today but it does its job fine.

Although it doesn’t last too much and has only a couple memorable scenes, it manages to be emotionally powerful enough to deserve a watch. It is also quite special in the franchise, since they never again tried to make a side story without poser action just like this one. 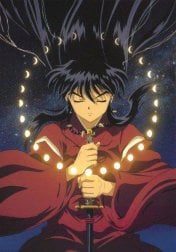 Of the Gundams I have see to date, ( Not counting SD... I am going to pretend that was never made....) 0080 is my least favorite. That said, its still pretty good, for those of you who are fans of the Gundam series, This is worth the watch.  The charcters do have a really interesting growth arch to them for such a short story- and this gundam is much more Story based than the other gundam series.  Where as Gundam is usually  very action pact ( Duh, its a series about Giant robots) there is little action in this one until the last couple of episodes in the story.

What perhaps most sets this one apart is the main charcters of the story are aligned to the Zeon Faction - where as the Main charcters in almost every other Gundam are the Freedom loving, Federation good guys. ( Except in gundam wing.. where every one is a giant male member with 2 legs under it.)

Over all, Gundam is a great series ( including wing) and this Short Anime 0080, is a worthy addition to the Universal century saga.  being 6 episodes long, it doesnt drag out the story- and its very much worth the time to watch.

If you have not watched gundam before. DO NOT start here.  Go and watch the Original Mobile suite Gundam ( or ) if you really have a hard time watching "old" animes, Start with Gundam Wing.

P.S. If you have ever been to /d/... you are still screaming and banging your head against hard objects after I made the reference to a giant walking penis)

It brings a whole new chapter to the official first series in which we were to believe that side 6 was always officially neutral, but this series says other wise. Though none of the other series characters are present, it is noted, that you have to be a “freak” to truly pilot the Gundam NT-1 Alex. This series does an excellent job portraying the series about how naïve kids can be. Al is aware of how dangerous things can be, but he puts the excitement factor first without thinking of the potential consequences of what may happen. You also really feel the bond Al and Bernie develop. Bernie has a general understanding of kids, but after awhile, he then sees some use for him in his missions as well and always looks out for him. Bernie has that thing with Al because he is still trying to get accepted by his new teammates because he’s replacing who the team thought was an excellent soldier and is only a rookie.

Chris is an important character to the story, but she really doesn’t have much development. She’s important, but not important in my mind to say that she’s a main character, but a significant supporting character. And she and Bernie are oblivious to the fact that they are of course truly enemy soldiers. But the story is really tragic on the potential realities of war. Even though the Federation was portrayed to have the higher moral ground, the Cyclops team portrayed Zeon in a different light. They were portrayed as being tight, and being very dedicated. They weren’t being overall bad people, but just doing their job. I would further explain more, but this is a series you have to see to know what I’m saying.

The character design is pretty good. Nothing too much to complain about, but really represents the circular style of the 1980s and isn’t drawn as angular as you see in most animes today. The traditional Zeon and Federation uniforms are still portrayed in this series as well and they look more like basic cloth than 1970s spandex, which shows how transcending the clothing style is this timeline in Gundam.

The mech design is pretty cool. It’s more bulky and detailed. There are more traditional artillery features to the Zakus and the Gundam as exhibited and show much more articulation. The battles are only exclusive inside Side 6 so you’re not getting the traditional in space battles technically in this one which was a semi-bummer for me because I would have loved to see how agile the ALEX is in those conditions. But due to the nature of this anime, the battles give a more representation of war realistically because of the collateral damage factor involved in this. Not saying that’s a good thing realistic wise, but a good thing in conveying the intended message in this anime. Plus, the battles rely more on guerilla tactics that you see in 08th MS Team rather than evolved reflexes because you don’t have those kinds of characters in this saga.

Personally, I think the English dub and the original Japanese track are equally good. The voice of Solid Snake, David Hayter who I think is credited as Sean Barker plays the role of Bernie and you wouldn’t really recognize it’s him. But I personally prefer his original Japanese voice actor Tsujitani Kouji, who also played Seabook in F91, Miroku in Inuyasha, Ryu in Street Fighter II V, and Ryuuji in Skullman. Also, I can’t deny the presence of one of my favorites of all time, Hayashibara Megumi as Chris. Hearing her name alone should tell you something. Wendee Lee, she’s ok.

The theme songs Itsuka Sora ni Todoite and Tooi Kioku, both sung by Shiina Megumi are very good songs that suit the atmosphere of the anime that does have a camp feel to it, but the style of music isn’t really my style. Not really saying it’s a bad thing, but it’s just something I’d skip personally. But the background music is also excellent in its own right and knows how to suit the mood.

Sadly, this was the ONLY Gundam series to be in Anime Insider’s Top 50 anime list. 0080 is a great series and a top favorite of mine, but I don’t think this is the best Gundam. But overall, you have to appreciate it for its themes and messages. I say you may need some previous Gundam viewing to understand this 100%, but because it focuses on a different kind of cast and has a different kind of approach, then you can still watch and will probably enjoy it. I felt this series further defines and develops realistic mech anime in relation to that. If you want action, then you got action in this series though that’s not the focus. If you want a series that focuses more on story, character, and character relationship building and development, then you’ve come to the right series.

This was much needed and, strangely enough, very comforting! They did an amazing job at showing how people involved in war are just normal people doing what they believe is best, no ill intentios, that was just their reality.

Another really good point its how they handled Al's realization of the consequences of real war, no matter who wins every single person involved loses something or someone.

Alfred, Bernie, Christina were such lovable characters! I don't know, i deeply enjoyed it!

I love the Gundam universe. Particularly series that take place in the Universal Century or U.C. for the Otaku. Storyline is amazing. So well constructed. To have any series let alone an OVA to revolve around a war seen thru the eyes of a grade school child. Powerful stuff.

Animation is as tight as the 80's came bring. Better than I expected on DVD quality. Usually OVA's tend to have a little more production value so it's in the right place.

Soundtrack is awesome. Orchestrated synths. So music of the future, especially from Japan.

The series characters are well developed, from young Al, a youngster who only has the war on his mind to Chrisina the Gundam pilot who... Watch and see.

Overall I am extremely overjoyed at this series. A refreshing change in the universe after rewatching G Gundam ( not what I remember in the teen, yikes!). A must for the love of all things Gundam, Mecha, Space Soaps, and as always the Otaku at heart.