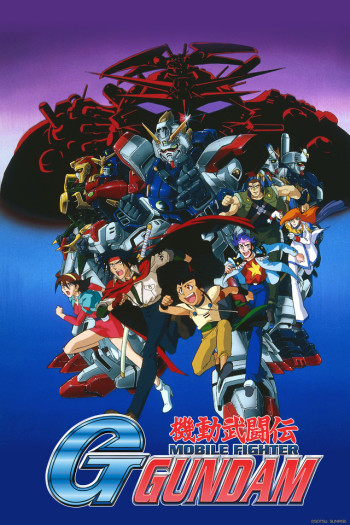 In Neo Russia, Domon has gone after the country's Gundam Fighter, but he is arrested by the local police and thrown into a large prison.

Gundam Fight Begins! The Gundam That Fell to Earth

Roar of the Winning Punch

Fight, Domon! Earth is the Ring

He's The Undefeated of the East! Master Asia Appears

Both series focus on over-the-top fight sequences and recklessly passionate male protagonists to draw in viewers early in the series and keep a hold of them throughout. What begin as straigtforward quests to achieve a goal, be it reach the surface or find a lost brother quickly expand into something far greater and wider in scope than one could have expected from the beginning.

Without a doubt, G Gundam and Gurren Lagann are both epic mecha anime. These two series show how the hot-blooded protagonists (Domon and Simon) must draw upon themselves to save the day.

-characters ride around in mechas and do battle with each other

Overall they're both a couple of classics filled with action, adventure, and all the giant robots with special abilities you can handle. If you like one anime you'll love the other.

The time is the near future. Years have passed since the 1980s, when "Gunpla"--plastic models based on the "Mobile Suit Gundam" animation--created a huge boom. Now, a new wave is sweeping the world, in what could be called a second Gunpla boom. Its popularity is driven by "Gunpla Battle," in which assembled Gunpla can be...

Both of these are not your average Gundam tale of a giant war, colonies dropping, or a teen stuffed into a mecha to save the day.

Instead both titles are tournament style gundam shows from different spectrums of the dial.

If you dug one, try out the other.

Touma Kamijou's right hand has the ability to nullify any form of supernatural power, whether it be magical, psychic, or divine; he lives in a city populated by students with these powers. Yet unfortunately for Touma, his arm also seems to nullify good luck. Despite his bad luck, the boy tries to stay out of trouble and just live out his life, trying to be...

If you're looking for the equivalent of Shining Fingers! Then look no further than A Certain Magical Index. Both main characters just have that ability to stick out their right hands and defeat their opponents no matter what the circumstance. Gives me chills just from how spectacular these characters are. You're going to get amazing fights, fun plot twists, and a story just intricate enough to keep all the mayhem together and to keep the viewer watching. If you liked one I'm sure you'll love the other.