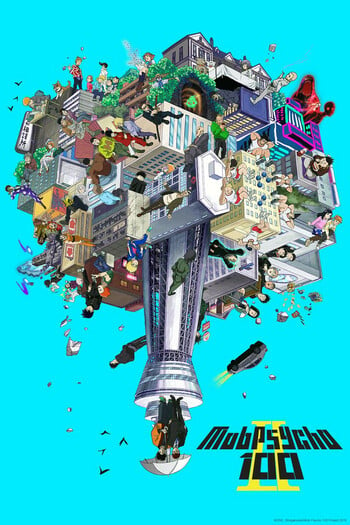 Mob Psycho 100 has been one of my favorite series ever. I am a huge fan of ONE and his works, I love the characters he creates along with the over powered MCs who aren't cocky assholes who act like the best. Mob is by far one of my favorite of ONE's characters, a middleschooler with peerless psychic abilities who just wants to be his best self and nothing more. While Mob Psycho might seem like an action-superpower hero type series, it's really a coming of age story that adresses real subjects with a myriad of eccentric characters. I absolutely love this series and all of it's silly, lighthearteded moments, its INCREDIBLE characters (I love the body improvement club OHmygoD they are so wholesome and supportive of Mob they make me so happy), and of course, all of the super badass psychic battles. Of course, you can't talk about Mob Psycho 100 without talking about Dimple who is, by FAR, the best ghost blob ever. I love that supportive bastard and in this season, he really takes care of Mob ( I love it T-T). Season 2 of this incredible series has made me smile so much that my face hurts. It is an incredible series and deserves to be loved by all. Never in my life have I seen such a perfect combination of slice-of-life, comedy, psychic powers, world destruction, exorcisms, and body building, and I sincerely believe that this series ( especially this season ) is worth the watch.

So 1st of all, I am a big fan of mob phycho series, I was waiting for season two anxiously. When i saw it it did not let me down!!

It stars off chill, like the 1st season, throws out some important facts, and one can see changes in Mob's personality. He actually grows a lot in those 12 episodes. The story and the animation are amazing, most of the characters are kept from the 1st season. The only thing that was not amazing was the sound, I think that it did not describe Mob's feelings as accurately as the 1st season, maybe that is because I am focusing on the last battle.

The second season of Mob multiplied the dramatization, which is ironic when you think of how the second season of One Punch Man ruined whatever drama it had by removing Saitama from the spotlight. With that said, even the extra boost in drama does not help Mob to stop being the exact same crap as before. Once again there is zero character progressions, which when you consider how that is the main objective of the show, it actually makes it far more hypocritical than it was already.

There is a lot of character study, but it’s done only on a rhetorical level. Mob still doesn’t change throughout the series, and you see that best when he leaves Reigen by claiming he does not need him anymore. Reigen is soon exposed to be a fraud and has to face the consequences of his scamming career. And then everything resets to zero by Mob changing his mind, helping out Reigen to seem like a real psychic, and returning to being his errand boy. What a joke.

There are more cases such as the above, like when Mob is forced to kill peaceful spirits, or is trapped in the illusion of the ghost psychic, or when he faces the leader of the evil organization. It’s always the same crap. They make it seem like he reevaluates his worldview through those conflicts, but soon afterwards he returns to being the same person he was since episode 1. He did not improve his body through sports, he did not confess his love, and he did not become a better man. It’s all done on paper to fool an immature audience.

It comes down to the exact same problem both shows of One have from their inception. When the hero is permanently stuck at a point of authority by always being the strongest, every conflict does not push them to change, since they can always smack the crap out of it. Progress comes through failure, and when you have your heroes winning all the time, injuries healing in an instant, and nuclear explosions turning to huge broccolis through magic, there is no need for it. The conflict can never be fixed and they will forever remain static and flat as personalities.

Mob Psycho 100 was and still is a superficial satire that procrastinates as much as it can while babbling about a message that means very little. Just watch it for the pretty colors and don’t give a damn about the hypocritical messages.

MS100 mixes in a sort of slice of life feeling with action and drama so perfectly well it amazes me. I actually detest slice of life animes, they're boring to me, but nothing is ever boring in this anime. The pacing of the story is the best, it's not erratic and although it does seem like most of this season was a bunch of nice moments that suddenly did a full 180 and turned crazy, I feel like that was intentional. I enjoyed the sudden change from the regular life of Mob to the crazy fight scene towards the end, it was perfect in my opinion.

The animation is also amazing. The messy chalk like lining and such really gives the characters and surroundings a lot more emotion while making everything look fun and interesting. A clean line animation style like One Punch would have been a bit of a drag if it were applied to this particular anime. I'll never get tired of looking at the scenes from MS100.

The sound was great. There were a few parts where it sounded like I was listening to a recording of the show but I think that was just my laptop messing up. Bad connection I guess.

The characters are obviously what make this anime number one in my heart. There's a wide variety of characters and personalities, each new introduction is a breath of fresh air (unless it's some asshole). There's not only the variety though, there's character growth. You get to see your favorite people grow and learn alongside each other as they encounter difficulties and obstacles in life that allow them to learn. Their bonds strengthen while they form new ones and it's honestly heartwarming to see. The way they influence the people around them is pretty great too.

I recommend this anime to everyone I know. It's amazing and wonderful and I LOVE IT. I cried, multiple times. It's hard not to when I've become so attached to these characters and this series.

I hope my review helps a few people. Thanks :)

So far, I think the second season is better than the first. The balance between fantasy, and real life problems is just perfect.