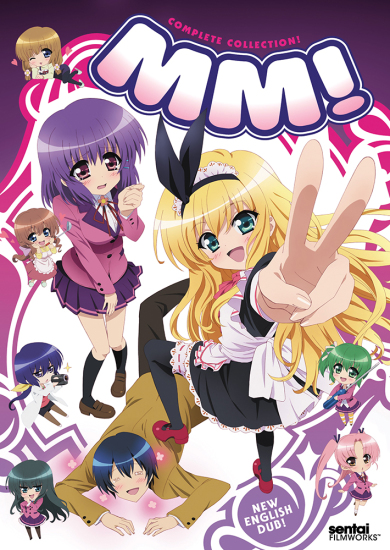 Story: Behind the comedy lies a serious plot, one where 2/3 of the mains try to cure their crippling flaws: one of supreme masochism and the other of androphobia. Some more serious events abound, backstory wise, and infront of all that, overshadowing it all, a tsunami earthquake of hurricane comedy on fetish fuel, cosplay, beatings, violence and righteous perversion.

The comedy it does exceptionally well, using the main schtick and character quirks without overusing the secondaries. Since it's what it is, it's slapstick oriented and verbal abuse aplenty, which I get a kick out of. And the obligatory Christmas episode and the obligatory "Last episode or two mood whiplash" was very well done and not overly serious.

Animation: I like the eyes... I like those chibis in the OP... it looked good? I got nothing.

Sound: Loved the OP/EP, with the fast beats and gratuitous English and a classical score in some parts that totally made the scene. Felt out of place at times but that just made it more hilarious.

Characters: One of the best parts is how there is no clear winner in the love triangle for some time. The two females each get time, their moments, and the pettanko isn't in the lead entirely. Some anime have them win but this... this has it be anyone's game, and I have to give it massive points for that.

Another is that their flaws are continuous; the masochism and androphobia aren't cured instantly or cured in a cheesy way. They're great character traits and it's used pretty well, as well as providing some backstory for Arashiko (The one with androphobia (Fear of men)). And that... they're just plain fun and have more depth than one would expect of an anime where the guy is smacked around every few minutes.

The secondaries do their role quite well, and are memorable, especially the manager, who pops in every so often with his fetish. Which is to say they're all messed up in some way with their own fetish/problem, and it makes for great fun character-wise.

Overall: This one was just plain fun. Laughed throughout, loved the slapstick and double for the constant verbal abuse, loved the classical score and it's a great comedy overall.

Overall I found this one fun to watch even if I usually am turned off by anime where girls are beating up boys.  This one does it in a very funny way.  I laughed a few times each episode.

Not much of a romance though.  It is just characters liking each other but not doing anything about it.  The nice things they do for the person they like are only the things even just a friend would do.

Story: Althought MM! was entertaining to begin with, it became repetitative and predictable. It did prove to have a lot of parody and satire but the running gags seemed to get in the way. Throughout the series, there were random episodes that proved to be quite funny. They just became paired with the running gags which became tiresome. I understand that the series itself isn't supposed to be serious or have a deep plot. However, it is a comedy/parody which needs to continue to be fresh and keep you laughing. I felt that MM! wasn't as successful in that. This wasn't awful but I felt that it hindered itself with continued running gags. It's still funny, amusing and get you laughing. However, there are better comedies out there that won't get old. Also, I would consider this does have a resonable amount of ecchi. If you don't like ecchi, I wouldn't watch this.

Animation: Decent for it's time. Nothing extraordinary. Although the character designs are distinguishable from each other and attractive, they definitaly look like characters from other series I've seen. I'm not sure if that was a point. The action sequences were flashy without fluid movement. The opening and ending were disappointing along with the "serious" scenes. However, mosts scenes that were intended to be funny did their job extremely well. Overall, it was ok but nothing great.

Sound: The soundtrack and opening and ending were subpar. The seiyuus did a great job. However, that was the only good part. Everything else was mediocre at best. I don't have much to say about it.

Characters: Very little development if there is any at all. It's part of the running gags which gets annoying and old after a while. The development that exists is either happens really quickly or is predictable. I know that MM! isn't meant to be a character series but I eventually got annoyed at the characters. They were ok but I've seen these type of series with a really likable casts and I felt that MM! didn't deliver in that aspect. They have there little niches and they stay in that and don't really surprise you.

Overall: It's funny and amusing but can get old. Luckly it doesn't last too long so it won't wear you out too bad. At the very least, you will get a couple of laughs especially from about every other episode.

MM , well it's a confusing anime and there is not much to say about it. But i can say that the plot of this anime was forced. After watching the first 3 or 4 episodes , you may lose interest in this anime ( Daijoubu , I've watched full) but don't be fooled by the starting of this anime. This anime will give you a promising ending. The story starts off with a main male character who is a genuine masochist. For those who doesn't know what masochist means , basically a masochistic person often gets excited when he is harassed or beaten up sexually , physically and even emotionally. The main protagonist joins a club so that he can cure his masochism. Will he able to cure it? Well find it out.

About the animation when i saw the first episode , It gave a pretty bad expression about the animation but its ok i would say. There were some clingy moments and the indoor backgrounds were not given enough attention.
And about the story..umm.....really some characters have a dark background and its just confusing.
So if you expect romance , you wont get it , if you expect comedy , you will get it. Just give it a try and if you absolutely hate the first episode , drop it!

MM! proves to have a very creative plot, and it made me laugh out loud a lot at the hilarious situations that the characters find themselves in. I found the premise to be quite funny. However I did feel that it did get repetitive with the same gags covered multiple times by Mio beating up on Torou is simular fashions quite a bit. Also there were some sequences that did not seem to fit at all in the universe of the story, especially concerning the inventions of Noa. It goes from one moment everything seems completely plausible in our world and then, blam, we have things that would never happen in a million years. It just seems a bit inconsistent in that department. But MM! pretty much had a funny, creative, and interesting story.

Most of the time the animation in MM! was pretty good. I felt that they nailed some of the action sequences pretty well. One thing that annoyed me though was the use of stills from time to time. It didn't happen a whole lot, but it was noticable when it did, and that slightly irritates me.

The Characters are very entertaining to watch in MM!. The characters are vivid and the situations they get into sparks laughter. My only major complaint was Noa. I feel that her character is completely unneeded in telling the story, plus she was also pretty one dimensional after her first appearance with the only thing keeping her in the picture was her one-sided love for Torou. Mio perfectly nailed the Tsudere role, and made it interesting to watch while preventing her from being a total bitch. Yuuno and Torou's relationship was something that I have seen before, but it was still fresh. One more thing that I didn't like however was that it seemed that everyone had a troubled past of fetish, so whenever you meet a new character, you automatically think about what fetish or Issue does that person have.

I rather liked MM! and felt that it was able to pull off being a Harem styled anime without following all of the stupid cliches that follow that style of anime. I would recommend it.