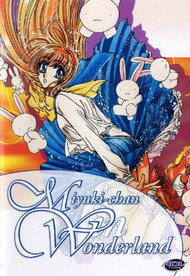 Miyuki, a normal Japanese schoolgirl, wakes up just in time to embark on the most unusual trip she'll ever take: a non stop journey to Wonderland! Along the way she'll meet up with a purrfectly sinful Cheshire Cat, a Chinese take on Tweedle-dee and Tweedle-dum, the scariest Queen of Hearts you'll ever encounter and a score of other beautiful women as she delves into the rabbit’s hole... in the middle of the sidewalk!

StoryThink you’ve seen Alice in Wonderland? Guess again. From the mind of Clamp comes this very ecchi and very... interesting look at the classic tale â€“ but it’s definitely not like you’ll remember it. In this world, pretty much every object or creature has been replaced by a buxom and enticing female, each of whom desires Miyuki -- our protagonist -- in some way. The Cheshire Cat is a sultry cat girl who wants to do naughty things to Miyuki, Tweedle Dee and Tweedle Dum are two dark haired beauties who want to fight her, the tea drinking party of femmes want to molest her, and the Queen of Hearts (complete in bondage gear) wants to punish her! Sound borderline yuri (girl on girl action)? Indeed, it almost was at times. I’ll admit it was interesting. I’ll also admit that it was a lot less ecchi than I had expected, even with the sexual-sounding description and the screenshots. The ecchi ranged from girls simply eyeing Miyuki and saying how cute she is, to forcing her to grab their breasts, to flat out molesting with others. Definitely the molesting and such was the most ecchi of it all, but the rest was sort of mild and just really suggestive. Of course, there were no males to be found in the OVA, so if you are male you’d probably enjoy this a lot. And the story? Like I mentioned, definitely interesting. Though I’m not one for non stop sexual references, the way the original story of Alice in Wonderland was changed was very subtle and quirky at the same time, which made this an amusing watch. Would I watch it again? Probably not, but at the same time this was definitely a unique viewing. There isn’t much else to say about Miyuki-chan in Wonderland as far as the story goes, because the plot wasn’t that deep. Imagine the things that happen in Alice in Wonderland, replace everything with girls (including white flower girls being painted instead of white flowers), add ecchi, and you have this short thirty minute OVA. If I had to choose a genre I’d have to say comedy, which of course derives itself from the huge amount of ecchi. All in all, even though I wasn’t a fan of the ecchi, this still was a very unique and interesting watch, so the story gets high marks from me. AnimationOnce again, it was so unique; it’s hard to not give this a high score. CLAMP has created a lush fantasy world full of the same things in Alice and Wonderland, just more... sexual. I thought the character designs were the most interesting, especially seeing how each fantasy character in the story was somehow turned into another hormonally abundant female. The backgrounds and such were usually sparse, but still appropriate, such as the tiny hills floating in the sky or the giant chess board. The designs themselves were very simple and didn’t always have a high amount of detail, and everything in general really appeared to be from the 80s. Usually in my mind, the anime coming from this time period makes rating this section difficult, because it’s hard to rate something old highly with all the newer beautiful stuff that comes out. That being said, the plot and idea was so unique that I was able to overlook the older animation and still enjoy it. This isn’t an OVA you’d watch for the visuals, but the character designs definitely are a highlight of the thirty minutes. SoundEven now, a day after I watched this, I have that horrible repetitive crap in my head. At first, the music seems quirky and fitting. The music itself is synthesized quirky beats that seem whimsical and confusing â€“ the perfect fit to the tone of the OVA. Unfortunately, after about a minute the track simply repeats. And repeats. And repeats. Literally the entire thirty minutes is the same unbroken track over and over, which gets REALLY DAMN ANNOYING. It moves from quirky and interesting to repetitive and obnoxious, which is definitely a feat given the short length. I found myself becoming distracted by it near the end, and that’s not a good thing. Besides the music, though, the voice actors all played their sultry roles well. CharactersYes, I admit, the characters were all very unique and interesting (as mentioned above a few times). The designs were the best, but the characters themselves were a bit... predictable. Each one of them had one single goal: molest Miyuki. Yes, it’s supposed to be ecchi, but could there have been even a little bit of variety? Here’s the general format of the OVA: see girl, see girl put on her sexual face, see girl try to molest Miyuki. Boooring. Miyuki herself was very naÃ¯ve and bubbly and overall was just confused the entire time, so she was fairly boring too. There literally were no other characters besides these. So, a good cast of characters but fairly predictable and boring as well. Then again, what would you expect? The point of watching this isn’t the characters; it’s the weird twist on Alice in Wonderland to begin with. OverallMiyuki-chan in Wonderland ended up being an entertaining watch, though the rewatch value is quite low. A very interesting twist on the original story with a varied cast of characters, and good character designs, but terrible, terrible music as well as predictable character roles. Overall, I definitely think this is something that should be watched once, even if it’s only because you won’t see anything like this again (at least not now). If you enjoy ecchi, want to see anything CLAMP or just want to see something unique and interesting, check out Miyuki-chan. It has its strengths and weaknesses, but I think the strengths (even just the "this is unique" factor) outweigh the weaknesses in this case. 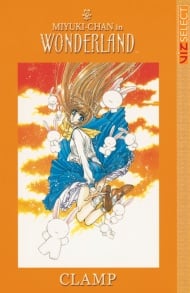