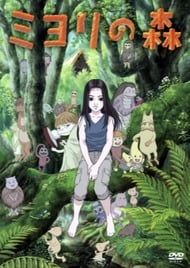 After her parents separated, eleven-year-old Miyori was left in the care of her grandparents who live in the countryside, where she lives a lonely and solemn life. While exploring the woods one day near the village, Miyori comes across a giant cherry tree and meets the spirits of the forest. They tell her that she is the guardian of the forest, a role that Miyori stubbornly does not wish to fill - that is, until she learns that a dam is being built, and it threatens to submerge her home and the home of the spirits! With the help of her new woodland friends and classmates, Miyori hatches a plan to save her new home...

Please note: Spoilers abound.I feel a little ambivalent about Miyori no Mori. I saw it primarily as a cute fantasy jaunt through the woods, and in this sense it achieved its goal more or less effectively. The morals and questions it explores are approached in a classic manner, but ultimately I feel that a few details keep Miyori no Mori from being as good as it perhaps could have been.The plot of Miyori no Mori is simple enough: A young city girl (Miyori, of course) moves into a quiet mountain village and learns that she has been chosen by the spirits of the forest to be that forest's guardian. Shortly thereafter, she uncovers a corporate plan to build a dam that would submerge the forest and nearby town, a la Higurashi no Naku Koro ni. She initially believes that a group of men she encounters in the forest have come to look for endangered species, because the dam cannot be built if it would destroy the habitat of an endangered species. She soon learns, however, that they have in fact come to ensure that there are no endangered species on the mountain - at least, not by the time they leave. Miyori then enlists the aid of the forest spirits and a few of the village children to chase the men out of the forest.One of the things that bothered me so much about Miyori no Mori was that it reminded me of so many other things - and didn't hold a candle to any of them. Maybe I'm being unfair about the plot similarities between Miyori no Mori and Higurashi no Naku Koro ni, but the scenario of a dam that, if built, would submerge an entire village and displace the entire population is one that I have only seen twice - Higurashi, and this film. Miyori herself seemed to be intermittently and halfheartedly channeling the girls of Hayao Miyazaki's work. She reminded me, at various times, of such Miyazaki characters as Mononoke Hime's San and Spirited Away's Chihiro, but with one problem: Never did Miyori approach San's majestic and fierce bond with the forest, or Chihiro's whimsical and occasionally terrifying romp through the world of spirits. All she did was remind me of these things, remind me so powerfully that it was impossible to ignore - but never did she actually live up to the characters she was channeling. Maybe she wasn't actually trying to imitate these characters, and I'm certain that there will be more than one reader who finds it incredibly unfair to fault one movie only for being similar and inferior to another, but I have said before and I will doubtless say again: Like it or not, we live in a world that has a past. Pretending that Miyori no Mori wasn't made in the same world as the earlier Mononoke Hime and Spirited Away doesn't change the fact that it was, and though I may be wrong, I don't think it would be unreasonable to assume that Miyori no Mori was at least partly inspired by such films, and others. My only real complaint about these connections is that the movie draws my attention to other great movies that I love, but fails to approach their enjoyability.In any case, aside from the plot and spirit of Miyori no Mori, there is yet more to say on its animation and sound. I personally liked the animation. It wasn't stellar, especially on the humans, though it was by no means terrible. Where it really pleased me, though, was in the spirits of the forest - even they, to a technical eye, are not marvels of art, but I found their design so endearing that I often couldn't wait to see the next scene involving them - not so much to find out what would happen, but only to see Bokuriko (certainly my favorite of all the spirits - of all the CHARACTERS, in fact) hopping around and transforming, or to see Kanoko walking around with his cell phone pendant. The voice acting was similar - I don't think it was stellar, but there's something to say for the fact that Miyori never annoyed me, despite doing more than her share of high-pitched screaming and shouting; and as with the animation, the voices of the spirits were adorable at best, and quite a lot better than tolerable at their worst.The music of Miyori no Mori was forgettable, but very pleasant. I won't pretend I remember so much as two consecutive notes of any song in the movie, but neither do I recall ever feeling pulled out of a scene by badly-matched music. Every piece was well chosen and attractive to boot.With good pacing, likable characters (mostly the spirits; I can't say I ever felt much for any of the human characters, even Miyori herself) and a family friendly plot (the movie's only relatively serious wound is inflicted on one of the spirits, who is quickly nursed back to health), Miyori no Mori is a movie I would happily recommend to those looking for a movie to watch with kids. Despite the taste it left in my mouth (a taste vaguely similar to Hayao Miyazaki), Miyori no Mori is not a terrible movie. It just isn't a movie I enjoyed enthusiastically, and I wouldn't strongly recommend it to longtime anime fans, unless you have a taste for lighthearted, childish fantasy. All in all, I would rate this film at 6/10.

Miyori no Mori is an extremely simple, yet welcomed addition to the ever growing library of anime surrounding youkai and the countryside of Japan. It’s a fantastical adventure, with eleven-year-old Miyori as the heroine. Forced to move to her grandparents’ countryside village after her parents divorced, she wanders off into a grand forest only to meet a colorful and friendly group of youkai. She soon learns that they call her the guardian of the forest, and is asked for a helping hand in saving not just the forest, but the majority of the village from a destructive dam project. The story may not be something new or entirely refreshing, but it’s still a charming ride. Miyori starts out as distant and cold, unsure of what to do with herself or her new life after being made to leave her home and now being called on to save the forest. She rejects everything at first, but comes to find her place in the village as she slowly understands what she can do. She’s not very appealing at first, being quite bratty, but she soon turns out to be clever and quick to take action, earning her a position of respect among her new classmates and the spirits (who weren’t sure of her at first). Miyori no Mori’s spirits are for the most part friendly and lovable, and are a joy throughout the story. Some of them are made-up creatures, while others borrow from classic myths such as the zashiki warashi. Regardless, they’re all very sweet and want nothing more than to save their home. It’s not until the end that we see some serious action from the spirits and what they can do, but it’s at least amusing along the way. Miyori’s classmates are somewhat in the same boat, although we see even less from them than the spirits. Still, they help add to Miyori’s development as she gradually makes friends. The whole idea behind the story isn’t new or mind blowing, but for me it was refreshing. You see a lot of youkai stories where the creatures are mean-spirited or against humans, but it’s always nice to see one where they bumble about, wanting nothing more than to live their life in peace. It reminded me greatly of Miyazaki’s works; family friendly and filled with magic, wonder, and child-like adventure. The ending shows this greatly. It’s a bit of a slow and sometimes uneventful ride to get there, but I’d say it’s worth the wait, as you’re rewarded with a lively and quite magical performance befitting a theater. Miyori no Mori isn’t overwhelming or incredibly powerful, but it’s enough to make you smile and remind you just how magical the world is. **This show was given to me to watch as part of the Secret Santa 2016 event! 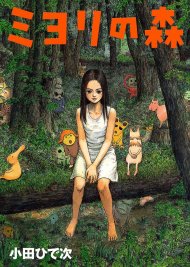