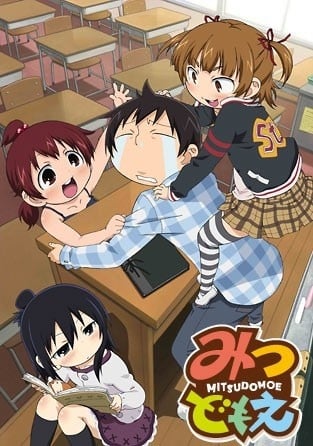 Satoshi Yabe is the newest employee at Kamohashi Elementary School. Wide-eyed and enthusiastic, he’s thrilled to finally be fulfilling his dream of being a teacher – but little did Satoshi know that he’d be assigned to class 6-3, a group that houses none other than the violent and perverted Marui triplets! Between the girls trying to hook him up with the busty school nurse, dealing with the unfortunate consequences of a hamster named 'Titties' and other misadventures, Satoshi’s dream of an uneventful school life has come to an end!

Story 6/10 Mitsudomoe is a slice of life anime, which translates into this: No actual plot. Each episode is divided into a number of shorter stories/gags, which may seem bad to most of you but actually it's what makes the series enjoyable and stress-free. There is a background though with a teacher, Satoshi Yabe, getting hired by Kamohashi Elementary School and being assigned to teach in the 6-3 class. He doesn't know though that in this class there are the Marui triplets, who will make his life a living hell. Each of the Marui sisters has a unique personality that is clearly shown from the very first episode: The Tsundere Mitsuba, the carefree Futaba and the Kuudere Hitoha. The series is all about their adventures in the elementary school while interacting with their teacher, the school nurse, their family and the rest of their classmates. Surprisingly, it perfectly reflects the picture of the modern children, as they want to know more about sex and act like grown-ups. And they know quite many things. It is with this attitude that in almost every gag in the show, the common factor is the huge irony. One will be talking about an anime show and the other thinks, he/she is talking about sex. This kind scenario will be appearing over and over and over and over and (I'll let you guess this one...) over again. But I was enjoying it even at the end of the series, so it’s not something that becomes tiring even after an excessive number of repeats. This is one of the things that may put you off, the adult humour and the innuendos that just have nothing to with so young children. Yes, they are 12, no they are not old enough and NO they actually seem much younger than they actually are. In other animes 13 or 14 years old look like they are just about to become adults. When I first saw the students, I thought it was a pre-elementary school. So yeah, maybe it will appear a little lolicon to you. Animation 8/10 Being a relatively "new" anime (only 2 years old), the design is close to being flawless. The graphics are crystal-clear. The characters' upper front teeth that are shown all the time, the red cheeks each character has, the little pool of tears or blood that appear when a character smacks his/her head or cries respectively, they all seem to be a childish piece of art but they fit amazingly well with the whole background and the characters. The design of the characters is rather simplistic without many details shown, but they blend with the scenery pretty well. Hell, even Hitoha's "death glare" is awesome and fitting in its own way. If I could find something annoying in the show is the excessive "rediness" at everyone's cheeks. I understand that they are all excited about all of this sex talk, but please don't make them red all the time. At one point even their shoulders were red. Sound 8/10 I wouldn't expect any real surprises while watching the show, like hearing a track from the OST and become obsessed listening to it like it happened with Sayonara Zetsubou Sensei. Instead, you will appreciate all of these sound effects used to help the jokes and the characters’ attitude. The Opening song Mitssu Kazoete Daishugoby Ayahi Takagaki, Satomi Akesaka and Haruka Tomatsu is one of the most addictive openings if you listen to the full version, supposing you give it a little time and a few repeats, while the Ending theme Yume-iro no Koi by Saori Atsumi was boring because of its slow pace. Characters 8/10 I was expecting a ton of characters to appear since it's a slice of life anime but luckily we get the chance to focus on a handful of them only. The main dish and where all the fun lies in, are the Marui Triplets. Each one has her own personality and brings out the fun factor with her own, unique way. The eldest sister, Mitsuba, appears as a Tsundere character as well as a precocious sadist. Futaba, the second sister, is the carefree character that has one obsession...BOOBIES!! Finally, the youngest, Hitoha, which was my personal favourite, is the Kuudere type with a strong interest to porn, as she has one with her all the time, but she also has a dark and mysterious side. The rest of the characters share the common thing that every weird thing they hear must have something to do with sex. Not that the main heroines don't think of the same but this ends up predictable after some point. As a gag show, there isn't any deep story for a character or any extreme character development, with the only exception being Hitoha after a certain show changing her life. The characters have the biggest part of what makes the series successful and funny. Even though they sometimes want and behave as adults, they have this childish humour that always made me giggle for how stupid it is. Overall 7.5/10 Mitsudomoe is a series that requires some time for you to like it. Surely the concept of watching some 12 year olds in their school at first seems daunting. Nonetheless, if you get over this small nuisance quickly and if you are fond of ecchi jokes and weird, uncomfortable situations, you will be enjoying the story from the first episode. Sure there are some facts that may give you the impression that it's just not for you, however, if you give it a chance, you will be pleasantly surprised. It's a decent anime and definitely something that you should watch if you want to relax or even have some good laughs.

This is a good anime for anyone who wants to simply sit back and laugh and who doesn't feel like watching something long and/or complicated. That said if you're put off by "adult humour" or characters appearing younger than they are then maybe you'd be better off with a different comedy. A good portion of the jokes rely on misunderstandings, pants and the like... However, simply put, Mitsudomoe is full of funny moments some of which border on hilarious. It helps that there isn't much of a plotline but that further episodes still draw on previous happenings creating enough links and forward motion that the anime isn't just a bunch of gags thrown at a page. And while some of the gags are repeated, more than once, this often serves to make the moment stronger. The characters themselves are large personalities and each of them (particularly the triplets) are unique. It is this that makes the show so enjoyable - the characters conflict in numerous ways, and while much of it is of a similar nature it manifests in a variety of ways. The anime itself does take some getting use to, particularly if you've not seen anything similar before, but is well worth the watch.

If you're anything like me, there are times where you can't find the motivation to invest time in long, complicated sagas, but instead would much rather just sit back and enjoy a few quick laughs, without the troublesome activity known as “thinking”. It was because I was feeling this way I picked up Mitsudomoe, and I can honestly say I'm pleased I did.   Story: 5 It is difficult to judge the “plot” of Mitsudomoe when essentially it lacks one. Each episode is essentially a few short stories on topics ranging from the class getting a pet hamster, to an exorcism at the school pool. This isn't necessarily a bad thing, In fact I think some of Mitsudomoe's success lies in the way it doesn't bound itself with a linear plotline, allowing it to keep things fresh and exciting. When it comes down to it, Mitsudomoe is all about the gags, of which there are plenty. Of course, not everyone will find it as funny as myself, the humour is quite perverted, jokes about breasts and pants are more then abundant, and relies heavily on confusion between the characters, and their larger then life personalities. Some of the gags, and scenarios, can be a little repetitive, but seeing as I was still laughing by the end of the series its not like it gets old. Animation: 8.5 As I write this Mitsudomoe is still one of the newest anime around, as a result of this the animation is of a high calibre. Everything is clean, colourful and smooth. The backgrounds are well done, with plently of details to tease the eyes. The characters are quite simple in design, lacking in any real detail, however their cutesy style fits well with the school-ground setting. Sound: 8 I may not have a great musical ear, but I did enjoy the opening theme to this show, among other things. A very bright and energetic song with does well to compliment the hectic nature of the show. As for the sound effects used in the show, they do well to sat the atmosphere, everything from silly noises to add to a punchline, to dogs barking in the background to emphasise the night. Overall the sound is used well to set an atmosphere, without overpowered the speech, or distracting from the action. Characters: 9 This is perhaps where the magic of Mitsudomoe comes from, the characters. It's the characters which make this anime great, the way they conflict and interact with each other makes for great comedy. As typical for an anime, the characters are much larger then life, owning downright ludicrous personalities that would leave a person outcast in reality. The characters manage to remain unique, each one with a personality different to the others in the show, and whilst some may seem incredibly simple at first, as the series progresses we often see another side to them,. Overall: 8.5 Mitsudomoe remains a brilliant escape for a few good laughs, managing to introduce us to zany and wild characters. If you want something simple and fun, and you have a sense of humour suited to innuendos and general craziness, then Mitsudomoe is definitely worth considering. Obviously if you just feel awkward about jokes centred around pants and nudity, then you may want to look elsewhere, but for those who revel in the guilty pleasure of such things it is a sure treat. 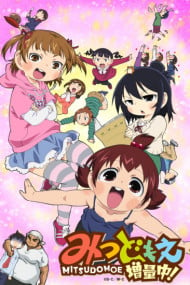 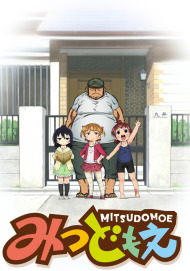 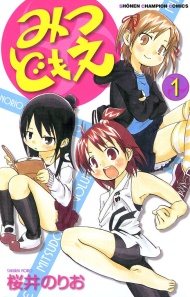 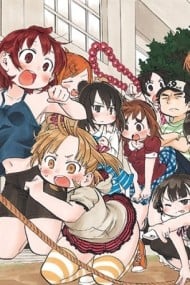