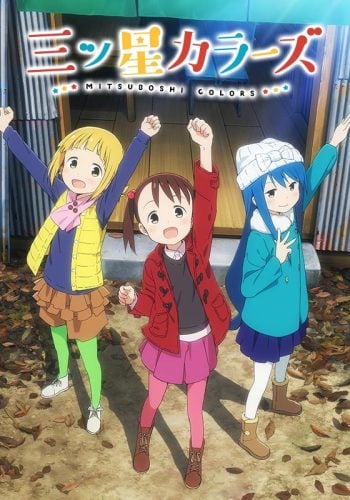 Who Wouldn’t thought of those three young girls doing great things? Well that’s I would like to see them doing fun things.

The story is about three young girls (Yui, Kotoha and Sat-Chan) are doing nice things to the world, around people and other places that they do, a sometimes doing some crazy things, I felt this story is sweet because they always do what children can do and not do something awkward situations, I bet these girls love to do when they can and explore around it, those girls are mostly elementary school girls around different ages (or maybe not in the same school together) but it fun to see them doing good ways to do so, those girls are fun to watch.

The art are good and the background of it is nice and neat, great design and more coloring backgrounds are great and beautiful, the studio did a nice job at making a good design and the characters of the girls were nice, they did the best.

Music of the sound was find not that great but it was close for an perfect score despite some minor issues with some of the sounds that might a bit off, but their are mostly good at some point, I did like the English Dub voice acting they did a great job for voicing young girls in such a fashion.

The characters are soo good and nice, with three young school girls at somewhere at their age, Yui the crybaby who cries in some earlier episodes but she gets better and brave at some point, kind of think of it of her, she is the leader of the colors group and she kind of smart, good thing she can know stuff especially messing with Kotoha in video games, hilarious, then we have Kotoha the blue headed girl who loves playing video games despite not at good at it thanks to Yui, Kotoha is just pure and not some kind of serious thoughts, I hope she can just do better in video games to try avoid of getting Yui to stop teasing her (like the one that did when Yui made Kotoha cry after she tell her about she sucks playing video games, that was funny) Kotoha is try to play well some day, and finally we have the yellow head Sat-Chan who is a cruel one among others, Sat-Chan always tease with someone that what she saids, Sat-Chan also curious about poop and she wants to hear about it, how funny it was, those girls are great and smart as usual, other characters that appeared are Saito a officer cop who do his duty, then we have Daigoro (or aka pops) is an old men that runs a factory store shop and he makes various things he does, then is Nonoka who is a young high school girl that hangs out with the colors to play with them and her older sister Momoka who works at a bakery store and she is nicknamed “Moka”, and finally is Sat-Chan’s mother who is kind of a mother being and runs a fruit stand, these characters are improving and great things to them.

This show was met for me and better things are good at, Mitsuboshi Colors are a very great show with best color design and a good characters looks, I believe this could be one of the top shows that I can barely to watch it, I hope they have a second season or so that would make it something special, Mitsuboshi Colors was a fantastic anime that I can see for a long time.

Let the children enjoy their experiences as children such as forming a group and let adults for being busy without all the fun that has passed, setting up a secret base, doing some challenges, going around the city, and using some imagination which adults cannot understand. It just sad when millennial kids, some of it, never do things like this again which is just an irony when they see it. Kids who prefer to action movies and adults who prefer watching some cartoons. Well, Mitsuboshi Colors isn't one of the anime which can be said to be perfect in all aspects. This is just a decent show with your typical cute girls doing cute things stuff or anything. It just an average show for you when you don't wanna watch an anime with heavy themes or just watch it because there are any other reasons, right? I don't know but this show is just full of imagination and adventure.

This is just one of those shows, the show that you don't need a deep analysis to understand this anime. Or else? There isn't much I can explain in this anime. Mitsuboshi Colors is just about being in a childhood, a phase where children are so active when doing kind of activities. Doing nothing is their enemy and therefore, these children have a mission to protect their hometown whatever the cost. Although cute anime doing cute things type of anime "usually" used a young cute pretty mature characters, Mitsuboshi Colors is one of the anime that used children as their bases who still enjoying being a kid. So, this is more like kids doing kids things instead of cute girls. However, I'll not drop the "cute" word itself because this show is just a charming way to get rid of it. Various kinds of things are done by the three children: Yui, Sacchan, and Kotoha are really interesting to be able to watch it. There are not many supporting characters who also fill various acts of humor from these children and sometimes, they all act or at least participate in the game. So, this can still be considered outside the limits so don't worry.

The art and animation are decent. Not too special in this regardless of the art deserves what is shown in this anime. It's bright, clean, colorful, great choosing colors which are perfect for cute anime like this, it's just we want to forget anything. With a variety of cute designs by the three kids, there is nothing to compare that Silver Link works very well with this anime.

The soundtrack, like the animation itself, is decent. Nothing to compare about it. It's just an upbeat style with a pleasure soundtrack which you never regret anything and makes a rainbow in your imagination. The opening and ending theme songs are full of peace and happiness with childish lyrics and things. With various voice actresses that go beyond and support everything, the jokes are always cracked so it's not wrong if this anime sometimes draws some laugh even though there are some which didn't work. But, this is just pretty well for this anime.

There are three main cute kids characters in this anime: Yui, Sacchan, and Kotoha. Yui is the leader of her two friends. Her characteristics sometimes being innocent about the things said by Sacchan who always spit out some jokes that always making a sense of wonder to Yui. Sometimes, you want to protect it because of her innocence which makes it whiny and careless about everything. Sacchan always brings on her funny jokes because she always makes some poop jokes without any reason. She is the character who continually creates her own jokes and always provides some puns such as running gags. So, this is more like manzai where the straight man and the funny man do a joke in a pretty fast move. The rest of it, she has the same interesting impression as Yui. Kotoha is just a sadistic video games addict who doesn't know to play video games. Her impression is always closed but not always imitated because of her habit that pretending play video games which is not the case. She also has a distinct impression from her own character even though not much she participates in a joke. The supporting characters are just well come from nowhere where they helped and participated in the activity of these trios. Saito who's always pissed off because of the trio but always give them some fun, Daigorou who always gives them a challenge for their adventure, Nonoka by filling in the characters and running gags, and other supporting characters. This show is just a childish enjoyable anime which you would overdose because of this anime.

Mitsuboshi Colors is an anime with a charming comedy that is easy to keep up. It's just a decent show about cute girls doing cute things but they are innocent kids who did their adventures to keep the city peaceful. It has a happy soundtrack, happy theme songs, colorful animation, cute characters, charming, and other cute things. It's worth it and you better check it out if you like the slice of life anime or cute girls doing cute things which always attracts a charming laugh with various funny gags to enjoy.

The girls are cute and even annoying at times while they go against pretend threathts towards their city.

The show is actually good, not just moe trash or kiddy anime. Lot's of the humor and dialogue is childish, but if nothing else it will atleast make you smile :)

Story focuses on the 3 girls running around their town and just being children.

Characters are real and lovable.