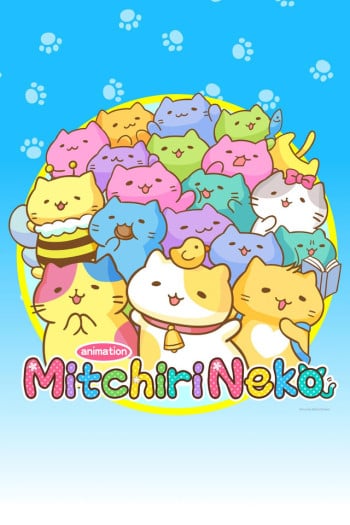 Both anime's are about cats and are both adorable! The series are short, so when your bored you can check both out.

Both very short, cute and sweet. They are both easy to watch and of course both have cats to learn about. If your feeling like you want more I recommend to watch the other one.

I highly recommend this to anyone who enjoys watching cat-like creatures get into silly situations.

Two adorable kitty anime that follow the everyday life of some very interesting cats. Storywise nothing really happens but both are quite pleasant to watch in one chill sitting. If you enjoyed one you'll most likely enjoy the other

The many great cats throughout Japan's history are back to strut their stuff in a new season. They continue to leave their mark on history, doing whatever they want, but what else would you expect from a cat? They get bored fast, and love to sharpen their claws and take naps. They might be scared of water and loud noises, but the amount of energy they display when they get excited is something to see! What kind of history will we see them create this time around?

Both are shows with short episode runtimes, both are about cats, and both are super cute. The main difference is Mitchiri Neko does a bunch of short but cute little vignettes in each episode, while Neko Neko Nihonshi teaches about a different thing from Japanese history each episode (but with everyone replaced by adorable cartoon cats). They are both. So cute. The cutest.

Tiny, abandoned Nyanpire would have died when he was the kitten if not for the help of a kind stranger… a stranger that happened to be a blood-sucking vampire! Bringing the feline back to life with a few drops of his blood, the man then vanished, leaving Nyanpire to fend for himself. Now, the whimsical kitty lives with Misaki as her housecat, and spends every moment of the day figuring out a new way to find or beg for blood, even if it means turning to a friend such as the samurai Masamunya or angel Nyantenshi!

Both are sickeningly cute series with short-length episodes that will make you go "aww~". Also the protagonist in both shows are animals (An emperor penguin in Okoshiyasu, Chitose-chan and a bunch of cats in Mitchiri Neko) so if you liked one and this kind of shows are your thing then give the other a go!

Both of these short-episode anime are about adorable animals just chilling and doing cute things. No plot, no character dialogue, just weird and cute. The music and colors are also similar. If you liked one, you'd like the other.

Mameshiba are mysterious creatures that are not quite beans nor Shiba dogs, but something in between.

Both series include adorable animal-like creatures and their daily antics with humans. Recommended to animal lovers and slice-of-life fans!

The story follows Shokotan, a fanatical cat lover living with 10 cats that can transform into "Miracle Cats" through magic.