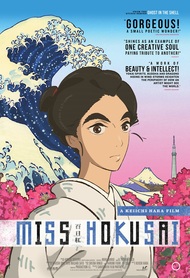 Works within the medium of anime can generally be divided into three formats: short film or OVA, television series, and feature film. Each of these formats has their strengths and weaknesses. For example, while feature films tend to have higher production values, they are unable to tell longer tales that are available to television series, especially long running ones. A film keeps an audience captive for its entire duration, so if the audience loses interest in the film, they don't have the option of putting it aside after a poor episode and approaching it with a fresh start. This is why most films focus on a single story, to keep the audience engaged from beginning to end. While there are subplots and non-linear developments in many great films, even episodic movies have some common thread tying the stories together. Without some sort of plot continuity, or at least some thematic continuity, the movie becomes a bunch of great individual scenes that add up to a big mess, like a quilt with beautifully made patches that's sown together by a grade schooler for an art project. Miss Hokusai is certainly experimental. It's comprised of several unconnected short stories, much like episodic series like Kino's Journey. However, whereas Kino's Journey had the benefit of compartmentalizing the stories into episode formats, Miss Hokusai tries to tie them all into one package with no effort to try to bring cohesiveness to the film. Everything from the animation (both mixing traditional and CGI) to the musical choices (using both modern and traditional musical styles) was wildly inconsistent, not only throughout the movie, but within each scene. Why does walking across an Edo period bridge evoke modern rock and roll? One critic says that it “is apt accompaniment to a story of a young woman who lives life boldly by refusing to bend to cultural norms.” If that were the case, then why is it not consistent throughout the film? I would have seen this as a possible motif if the rest of the soundtrack weren't a mix of traditional period music, classic cinematic scoring, and more modern instrumental pieces. Inconsistency is what keeps this anime from being great, but it certainly has its merits. The animation was overall very solid. Obviously this anime had a high budget for an animated film; and they took advantage of it by creating some artistically beautiful scenes, particularly in how both O-ei and her father Hokusai viewed the world through artistic eyes. Certain stories and ideas were incredibly interesting. The stories would address family life, the spiritual realm, the impact of art on psychology, the impact of sexuality on art, dealing with the struggles of illness and disability and much more. The problem is that none of these story threads have the time to develop or resolve properly (save one that has a definitive “ending” that I'll leave out due to spoilers). Partly the lack of resolution is due to the little that is known about the historical figure O-ei, but certainly the writers could have made something up to at least draw everything to a close by the end. I want to keep this review short, but the bottom line is that critics seem to love this movie, but I doubt it has much appeal to a general audience. I love my share of abstract, surreal, experimental anime, but this movie was not the right format, not the right story, and not the right directing to create a movie that's worth seeing in theaters at full price. Perhaps if you're lucky enough to catch it on a Saturday matinee or if some streaming site picks it up eventually, it's worth checking out if you're interested in anime with a different style. However, just as a piece of entertainment from your local artsy limited run theater, you can probably give this one a pass.

I love movies and series that have a tendency to differ itself from the typical stories that we see everywere in cinematics these days. Therefor, as I saw the trailer for this one movie I felt an enormous urge to see it. I had a picture of how it would be and was hoping for a movie that I would enjoy, however that, by the ending of the film, to be an miscalculation on my part. And why?  The story: The story, on paper, does seem interesting at first glance. Using something that seem to be rare in the world of animated movies. A mix of a biography and supernatural story. We get to see the evolution of a girl and her view of her on life and her relationship with her father. A man that the people of Japan recognize as an exellent and talanted artist from that time of age. And as much one may like this premis, and believe me, I did, I still ended up  feeling the story to be a little bit too stale, slowmoving and uncaptivating. Sure, it was interesting, but there was nothing that made me truly invested in the different happenings of the movie. Everything that went on was either kind of meh, or at best, cute. Nothing really stood out and the whole movie went on the same way, making me feel like nothing really evolved at all. Sure time went on and people appeard and disappeard, but in the end, nothing really made me feel that much. Which is sad, after all, I wanted to like the story, not only on paper but also in exacution. The animation: One could say that the main reason I kept on watching was because of the animation. Because if there's something that the movie does well, it's that. Colors, design and setting makes it as stunning as I imagine the Edo Era to be. With classic looking characters, with pretty simplicity and realistic beauty. Not some fantasy looking people, designed to look as cool as possible. No, everyone fitted into the world around them with harmony. The movie focuses so much on the artistic world of that time and the movies animation mirrors that very well. The Music: Nothing is as bland as the music. At times you have gorgeous japanese traditional music just enhancing the feeling of old time Japan, but then at the more "intense" moments you suddenly get attacked by some kind of rocky kindof music and that little immersion is blown out the window. Why not stick to traditional music is a big question one could ask. So one should know that there's really no soundtrack gem to be found in this one. The characters: Overall, the characters in this movie is kind of great. They are that one other thing that makes you finish the movie. However much the film can be dull, the characters still seem to have something that you want to see.They are not the most lively people in the world but their quiet nature and artistic ability actually makes them intersting. You have Miss Hokusai herself. An uncharming and kind of agrivated young woman that kind of hates her father, but at the same time helps him out with his paitings, live with him and aid him in many ways. Then we have the great painter, her father. A trashy looking old man that seems to never open his mouth, except for few moments and then it's real weird shit. He seem to have a phobia towards sick people which makes it problematic for him to form a bond to his youngest daughter that's been blind since birth and has poor health. So he leaves her with his wife and live saparted with Miss Hokusai. We have the artist-in-training Zen. A young man that left being a samurai to pursue a career as an artist, living together with the father and daughter learning from them. You have Miss Hokusais younger sister, who's bond to her sister is adorable. The man that Miss Hokusai seem to feel love for. The thing about this movie is the fact that you meet so damn many characters. However some of them, if not most of them, just appear a little while and then disappear to never be seen again.Which is sad because many of those people are the people that I, myself, liked a lot.  The way the movie tells its story, seem to be a way of telling us how artists lived and slept. How they, with or without fame, lived a simple life without extreme luxury and fame. They were a working class just like a merchant or courtesan. They had their trade and lived of it, nothing less nothing more. And looking at it from that perspective makes the movie so much more human and therefor so much more relatable. I'm not saying the movie is a bad movie, cause it really is not. It's a slowpaced story with a realistic take on life at a time when life was lived differently from now. It's something different and if you have no problem with an unepic film then you should have no problems watching this. Give it a shot and see what your opinion will be. AFM

not for everyone but personally I enjoyed it. a short n sweet slice of life! SOUNDTRACK 10/10!!