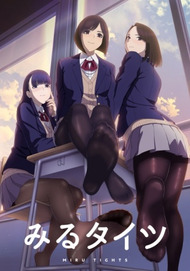 The first morning of the new semester is rainy, with cherry blossoms falling onto the puddles. Students enter the school gate with various colors of umbrellas. In front of the shoe locker, Yua starts chatting with her friend, Ren Aikawa, whose tights got wet from the rain. Homi, who was drenched, joined them pretending she was jumping. The new semester begins with the girls doing seemingly normal things...

The first morning of the new semester is rainy, with cherry blossoms falling onto the puddles. Students enter the school gate with various umbrellas. In front of the shoe locker, Yua starts chatting with her friend, Ren Aikawa, whose tights got wet from the rain. Homi, who was drenched, joins them. While the plot description might be a bit simple, and more of a rough outline of the first episode, that's because this series doesn't have all that complex of a plot. The running time for this series, including the bonus episode, is less than an hour long. But a complex or long running plot isn't the focus of this ecchi series. The focus is the three high school girls that we are introduced to at the beginning of the series. This is going to seem a bit weird, but this ecchi series doesn't really have the blatant sexual overtones of most ecchi series. Oh, it's still meant for you to get your rocks off to, but there isn't any of the regular ecchi tropes here, such as the male protagonist accidentally seeing one of the female characters naked or in a state of undressing or dressing, or one of the female characters being covered up by conveniently placed steam in a steamy public bath house. Instead, the whole series is slow shots of girls putting on stockings and their feet. That's right, this is a foot fetish ecchi series. Surprisingly, they do exist out there. Most of this series is slow panning shots of the three main girls in various states of putting on, wearing, or taking off stockings, along with shots of their feet. And I never thought that I would say this about an ecchi series, but Miru Tights is pretty comfy. While it's pretty simplistic, it still somehow managed to make it's characters charming and likable. To top it all of, the animation is really nice. Although that's probably help by the fact that a lot of the shots are very basic, but that doesn't take away from the fact that it's a nice looking series. My only complain is that the whole series seems to have some slight chromatic aberration throughout it, but it's not all that distracting. Would I recommend Miru Tights? Yes. It's wonderfully animated, the characters are actually likable, and despite the short length, it actually takes it's time making sure the audience gets what it wants. If feet and stockings is your thing, then this anime is definitely for you.

...as though by a process of alchemy, this show boils away the dross of story and character development, leaving us with a treacle mass of fanservice that will delight any podophile, its runtime suited to fit the length of the average fap-session...

Miru Tights is a literal MASTERPIECE in every single way. On a unironic note, the animation is genuinely beautiful, possibly some of the best of 2019. 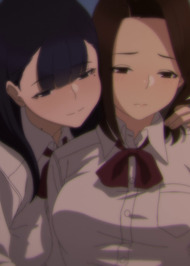