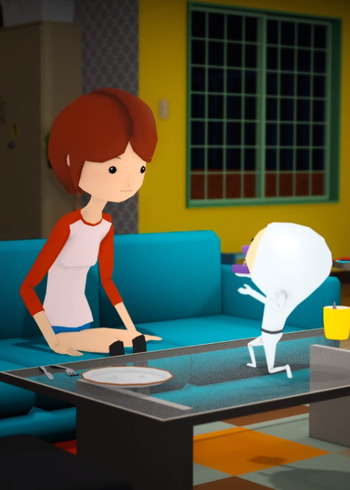 On the battlefields of World War II, a new threat is realized as a mysterious ship from the future is warped back in time to the 1940s. The ships' two living passengers are the only ones who know its whereabouts. Now two elite agents must stop the Nazis from capturing the survivors, finding the ship, and launching their diabolical plan to take over the world, codename: URDA.

Welcome to zentrix, the most perfect city on the planet. This is all thanks to the famous scientist Emperor Jarad, who created the Omicronpsy super-computer. The computer manages all of the city's higher and day to day functions, controlling a wide variety of machines and robots. It's paradise. Until one day, when Omicronpsy realizes that it would be a better ruler than Jarad. The computer revolts, and in the ensuing battle, Jarad and the scientist, Dr. Roark, are lost in time. His daughter Megan learns what happened, and is determined to follow her father back in time to save both him and her homeland. But due to an accident during time travel, she is now stuck in an eight-year-old body. Megan and her loyal sidekick Mango now have to reactivate the robot Zeus, find her father, and fend off attacks from the forces of Omicronpsy, who have followed them through time.

Super Jetter comes from the 30th century, but after fighting the villain known as "Jaguar" he ends up in a time machine that sends them back to the 20th century. He meets a young girl named Kaoru whose father is the Secretary of International Science Bureau of Investigation, Saigou Mizushima. With his super abilities, Jetter is asked by Mr. Mizushima to help keep peace in the 20th century. Jetter has superior intelligence and strength compared to those of the 20th century. He has futuristic abilities such as being able to stop time for 30 seconds, an anti-gravity belt, infrared goggles, is bulletproof, and has a paralyzing gun.

RErideD: Derrida, who leaps through time

In 2050 engineer Derrida Yvain is famous for his contribution to "Autonomous Machine DZ," at his father's company, Rebuild. But when he and his colleague Nathan discover a dangerous flaw in their creation, their warnings go ignored. The next day after Nathan's daughter Mage's birthday party, the group barely escapes an attack by unknown forces, leading to Derrida's unwitting captivity in cryogenic stasis. Ten years later, he emerges in a world at war with the mechanical lifeforms he helped create. Now, he fights to survive his nightmare future to make good his promise to "Take care of Mage."

Each day, Charady sits down with her pig and rabbit friends and reads a new joke. From the tale of a child and his adulterous father to the woes of the girls at a competition for blondes, from the plight of an old woman and her lost dog to a tribal boy's challenges and beyond, there's plenty of hilarious jokes to be read in Charady's book!