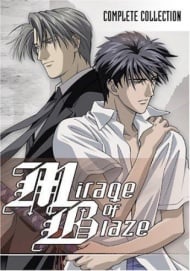 StoryI have mixed feelings about the plot of Mirage of Blaze. As far as originality, two thumbs up. I have never seen a series or movie that deals with reincarnated souls who exorcise warlords of the past, who still battle in the present for territory. In addition, the whole thing is done under a very dark mood and atmosphere. However, the plot isn't consistent. At first you think the plot is based around one warlord that wants power... and several episodes are based on the person. Then suddenly, the focus changes to a whole different plotline, which doesn't work well for a series of only 13 episodes. Suddenly the big bad guy of the first episodes is gone, and you never see him again. One of his cohorts is still around, HELPING the main characters now! This inconsistency also leaves for a pretty unsatisfying ending. The other problem is that there are so many names (of people, clans, places) that you get it mixed up. I still am confused about a lot of things in the series, and who was related to who. I felt like I paid attention, so I just don't know. The major theme is the character relationships, but rather than discuss that here, I'll do it in the character section below. In addition, this is yet another series claimed to be "yaoi", when it IS NOT. If anything, shounen-ai. There is no sex, and only one attempted kissing scene. Come on, people.. stop boycotting series because you are homophobic! There is nothing questionable about this series (besides one character who is male obviously in love with another)... so get over it! AnimationAbsolutely beautiful animation, in the vein of X TV. Overwhelmingly dark colors are used the entire time, with a soft tone, giving it a unique look. Most other colors used tended to be related to sunsets or backgrounds. I can't say enough how much I loved the look of the characters in this. The shading is very different than most series, and gives everyone a very noble or serious look. Special effects for spells and such were good, though cheesy when they put up protection bubbles (it looked like film on bubbles... iridescent and a bit fake). SoundTruly amazing music.. some of the best I've heard in a series. The same few tracks were used mostly, but they were amazing. Very haunting and beautiful, orchestral in nature. The cry of a violin sings in the background during emotional moments. I might actually download the soundtrack, that's how much I enjoyed it! Voice actors sound deep, thoughtful, and moody, which fits VERY well with the tone of the series, and with the character roles. CharactersThe characters and their interactions are easily the focal point of this series, regardless of what other plots are going on in the background. Namely, between Kagetora and Naoe, two reincarnated souls with a very heavy and dark history together. This is where the "yaoi" (as people call it) comes into play... since there are some very deep feelings going on with certain people. But again, there is no actual yaoi, so don't let that make you afraid of watching the series. Without a doubt, you are drawn into the characters' fates and hardships. People's pasts are explained well, and you have a good feel of the relationships between all the reincarnated people. Unfortunately some of the lesser characters don't get as much time in the limelight, but that's to be expected. OverallThe animation, music, and character development give this series high marks, with slightly poorer marks for the plot department (because of confusion and inconsistency). All in all, a great watch, and somewhat unheard of, I think. Just remember, it isn't yaoi. If you want something dark and interesting, this is for you! For rewatching purposes, I might watch it again to try to understand the plot a bit more, and maybe if I want a dark watch. Otherwise, I probably wouldn't watch it again, though I feel that way about most series. Once was enough.

Mirage of Blaze, or dammit I thought I picked up the new X DVD. Story - 5/10 The story does somewhat play out like the like the previously mentioned series, X, at the start, as it revolves around one group trying to essentially destroy the world, The Feudal Underworld, and those who need to stop them, the spirit exorcisers, including their reluctant leader, Takaya Ougi. Though after those first few episodes dealing with that subject it turns into a monster, errr spirit, of the week show. The remainder of the show touches on a few different spirits that need exorcising, all while Takaya still struggles to deal with who he was the past, and what may have occurred in his many lifetimes. When he does seem to accept who he was, everything goes bad. First he learns of a event between Naoe, essentially the right hand man of Takaya’s former self, which tears the two apart. While coping with that tragedy he also becomes cursed by his brother, and now he’ll need help from all the members of his clan, as well as some former rival factions, in order to protect the world. Unfortunatly there were just too many times when the show went off the rails or skipped around, instead of building a story. At times it almost felt like characters were either dropped in out of no where, or a backstory became integral to the show without ever being introduced beforehand. The opening plot and closing one were good, but with such a short series they should have decided if they wanted to be a “Monster of the Week” show or if they wanted to properly link those two aforementioned stories, because as the OVA showed, they could have made a very good series if they maybe just plotted things out a little better beforehand.  Animation - 7/10 Based on past work of the Madhouse animators, most notably a series that resembles this a ton, X, I had no doubt the animation would really stand out in this show. Their character style really synergizes with the premiss, as they've always had this slightly gender-bending look to characters, and this time around it works well with characters like Kousaka and others who have possessed males and females over time. While I do enjoy the CLAMP style of animation, there is a slight downside, as many of the characters look similar and it can get tricky, especially when the series is also a bit hard (dull) to follow. The scenery is on and off too, as times it is stunning and other times it really seems as if they purposely made the scene take place at night to mask the lack of shading and detail, which we see more towards the end of the series, possibly as they knew things we winding down in the show's life. Sound - 6/10 I love the opening song for the series. It's just so cheesy, but perfect for this type of Anime. Oh yeah it also doesn't hurt that it's sung by the artist who gave us one of the best Anime Title songs of all time, “Real Folk Blues” from Cowboy Bebop. The rest of the music is okay, but nothing jumps out as being spectacular. The ending theme is a nice orchestral piece, but a bit flat for the series. The same goes for the in show music, it's the typical background piano/stings/flute songs that populate many shows. The English voice over cast was filled with many of the artist from this time period. The only one that stuck out, unfortunately for being annoying, was the main character Takaya. The artist's voice is okay, but just came off a bit too gruff for a young high schooler. Characters - 5/10 Despite having thousand year old characters, they have backstories that are pretty thin. We learn who a few of the characters were in past lives, but outside of knowing they were the King, a loyal subject or an enemy we don't get too much information on them. When we do get a backstory it pretty much centers around Takaya and Naoe, our two main characters. While at first Naoe seems like a past council to Takaya, who is trying to make him see who he was and the powers he posses, things get darker as the series goes on. What was at first dedication and a willingness to protect at all cost becomes an obsession, with him unable to hide his true feelings for Takaya. Other characters who appear integral to the story, Haruie, Chiaki, Kousaka and Yuzuru, seem to come and go without getting more than a passing mention. They had a nice group of people, who at times make you believe they’re important, act as nothing more than a vehicle to move the story back to Takaya and Naoe's past. Like the plot, there was a great base for characters, but they went under utilized.  Overall - 6/10 While I didn't hate the show, and actually enjoyed it the first time i watched it years ago, I was bored rather quickly. The story just circles around and around and never gets anywhere to really enthrall you. It's kind of amazing how a show with so much dialogue didn't really have much to say of substance. 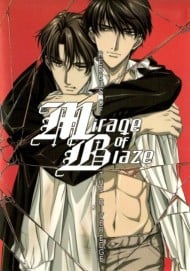 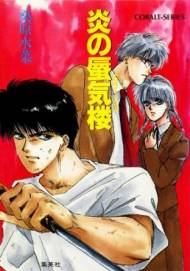 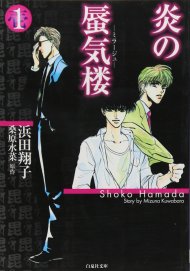 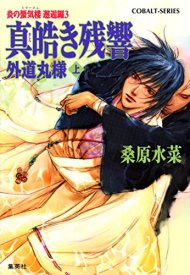 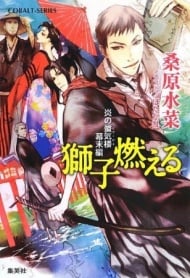 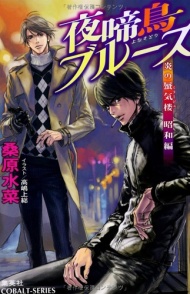