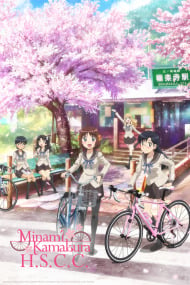 I Won't Let You Take Natsumi-chan!

Choosing a Bicycle is Hard?

What Can I Do?

A Challenge From Mr. Bear?!

Positive *The first thing that I immediately liked, right from the first episode, was the animation and art style of this anime. JC Staff makes some of my favorite art, it’s so colorful and vibrant. And this immediately caught my attention in Minami Kamakura. The color palette emphasized what this anime wants to convey being the joy of cycling with your friends.  For a video review, check out my Youtube channel. Link on my profile page. *And another thing that was way more surprising when it came to the animation was the excellent use of 3D animation in this anime. If you are familiar with my channel, you must have picked up that I don’t like 3D animation. But once in a while, there’s an anime that uses good 3D animation. And Minami Kamakura was one of those rare cases. When we see that 3D shot of the sea in the first episode, I was sold completely on the animation of this anime. *There’s another positive point about the animation that I want to address. In my review of Long Riders!, another cycling anime, I complained about the robotic and unnatural cycling animation. Well here in Minami Kamakura, the cycling was way more natural. The bodies of the characters had a more natural and non forced position on the bike. So the, probably, higher budget that a studio like JC Staff could invest in this anime made it possible to deliver  better animation than that one of Long Riders! where the budget, most likely, was a lot lower. *Next positive point is that it seems that this anime was sponsored, or at least supported, by actual bike brands. The names on the bike frames were actual brands instead of slightly adapted ones like we see in Yowamushi Pedal. And when an anime is supported by actual companies, usually it means higher quality, take Hibike! Euphonium for example which was supported by Yamaha. This extra support means extra quality when it comes to the final design and animation of the companies product, in this case the bikes. *The last positive point I have to say about Minami Kamakura was that at the end of each episode, the anime would give us live action bike information about all kinds of maintenance going from fixing punctures to finding your ideal position on the bike. So this was truly an anime that wanted to inspire and help people to get on a bike. I do have to mention that the 2 female hosts were quite cringy to watch. I don’t understand why Japanese women always have to act so cringy in live action things. But adding this information to the anime was pure bike propaganda. Negative *Now my negative points are basically the same ones as I mentioned in my review of Long Riders!. 1) If you’re not into cycling than there’s no real reason for you to watch this anime and you won’t find a lot of enjoyment in it. I think that explains the low score that this anime received on A-P. It’s a niche anime that only applies to the fans of slightly moe cycling anime’s.  *And 2, just like in Long Riders! there’s no development towards an ultimate goal. In Long Riders!, we do have the prospect of the big flèche that Ami wants to ride but in Minami Kamakura, there’s no future goal at all which again added to the “boringness” of this anime if you’re not into the world of cycling. Conclusion So as a conclusion, Minami Kamakura was like Long Riders!, missing a long term goal and some excitement, but the way how everything was presented was way better. The animation felt more natural, was smoother and had a more vibrant color palette. So overall I’m ging to rate Minami Kamakura Koukou Joshi Jitensha-bu at 3,5 stars. As a cycling fan, I had fun watching this anime but I can understand that not everyone found it to be so interesting. 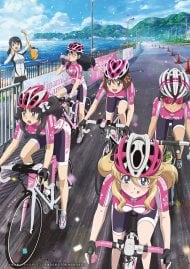 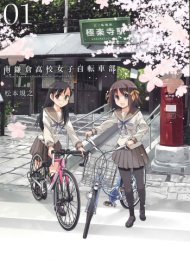