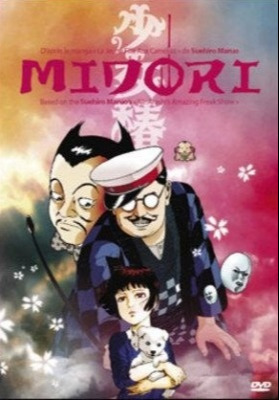 With a love for the sick and twisted, Midori holds the tempting promise of a tale built entirely from the perplexing macabre of manga artist, Maruo Suehiro’s, crazed mind. The allure from comments of the show being the most depraved and vile animation to surface from Japan piqued my curiosity with their forbidden promise.

Opening in a dark and depressing rundown suburb, a young girl called Midori sells flowers to raise money to feed herself and her sick mother. Pursued by the owner of a travelling circus, she is offered a better life in which she will be cared for and able to live comfortably. Events take a swift downturn, and the true guro nature of the creator's freakish nightmare is revealed; the psychological devastation of Midori within the freak show will have a varied reaction, depending on how tolerant the viewer is to cruelty. Leaving no subject taboo, Midori depicts graphic rape, violence and sexual fetish that will appeal to an extremely small minority of the anime community. Much of this horrendous spectacle will remain with you for a long time – the eyeball licking scene has become infamous for this exact reason.

With the initial disturbing events out of the way, Midori reveals a vaguely interesting plot with an unlikely love story at its heart. The young heroine finds herself drawn towards the newest member of the circus – a midget wizard named Wonder Masanitsu who can contort himself through the neck of a bottle; with a mysterious past and dangerous magical power, the dwarf is intriguing but shows a softer side to Midori. The introduction of this new character causes some interesting jealousy to propagate throughout the rest of the troupe, especially when he proclaims Midori as his own. A twisted relationship blossoms – almost to the point of being creepy, with the implied age difference being significant – and the two start to plan a contented future together.

Sick and twisted does not breed happiness, and so the show concludes with a visually perplexing montage of symbolic tragedy. I can’t pretend to understand the ending, or the rest of the show for that matter; Maruo’s gruesome creation weaves together a confused assortment of old reel films, postcards and explicit sexual violence. Only the most astute and devoted viewer will fully appreciate Midori – taking it at face value will causing analogies to be missed and much of the directors intentions to be lost. As cleverly obscure this show is, I found the repugnant imagery to be too distracting, leaving me feeling unsettled and a sick to the stomach.

Described by some as a kami shibai or paper play, the traditional Japanese influences are apparent throughout the show, especially in the characterisation. Mixing together different styles and creative ideas from the original manga works, the entire movie was created singlehandedly by one man over five years – a feat which deserves recognition. The contrast of bold colours and delicately detailed artwork is genuinely stunning, probably to a fault, as the horrific contorted forms of victims of the circus take on a life of their own.

The unusual soundtrack of the show is very fitting with an atmospheric feeling of a carnival Wurlitzer serenading the freakish performers. Although structurally simplistic, it is not memorable and does not suit the unusual artwork. Suffering from poor recording quality, the voice acting has some very apparent flaws; sounding hollow and tinny, it has a reverberating echo that attests to the limited budget. The amateur cast struggle to bring alive the characters, adding to the sense of “wrongness” to the overall audio.

Midori is weak and helpless; used for pleasure by others and having her dreams trampled to satisfy the jealousy of her lover, you never see any development or backbone as she is subjected to ritual humiliation. The fear of abandonment keeps her tied to the circus, and with no future or happiness on the horizon, she clings to the next best thing – a menagerie of freakish human beings, but the closest thing to a family she has. From the snake-like contortionist, to the gender bending gymnast, they are all depraved individuals who thrive on the suffering of others.

By far, the most intriguing individual is Masanitsu, the dwarf. I still have mixed feelings about this character – on the one hand, he uses cruelty to keep Midori by his side, but at the same time he shows her love and grants her peculiar but blissful visions. Using his dark magic to control people, he bestows love on those he believes worthy and causes sickening nightmares for those he doesn’t. The supporting cast's vicious and despicable treatment of Midori leaves a bitter taste in the mouth – the explicit and vulgar acts come as second nature, but will probably alienate the viewer from the peculiar onscreen happenings.

Regardless of stunning artwork and fascinating characters, I still found myself walking away from this show with nothing but the graphic violence and tormented visions. Maybe I “didn’t get it”, but a show that relies on degrading sexual deeds and outlandish carnage to gain reputation did not deserve concentration and focus to unravel the knotted plot. Outstanding for many reasons (some of them not good), Midori could have been a lot more, but the frequency and intensity of abhorrent scenes will not sit well with the majority of anime lovers.

Story: 4/10
The world is not beautiful, therefore it is; a thought-provoking proverb popularized by Kino's Journey that nonetheless leaves its trail in lots of anime. Midori is in this sense the ultimate combo breaker in its determination to depict a cruel world whilst rejecting the vaguest of indications that beauty may lie around the corner. Its unpleasant worldview manifests itself perfectly in young Midori who is taken in by a group of deformed circus artists after the death of her beloved mother.

Her various experiences with these individuals are as far from beneficial as they are from being mutual and the movie is eager to explore its grotesque combination of childhood innocence and sexual perversion in the most surreal ways imaginable. The titular character is not only physically, sexually and mentally abused by her colleagues but also finds herself in a frightening relationship with a dwarf magician whose affection mixed with terrifying abuse creates the foundation for a story that thrives on using jealousy as the ultimate plot device towards tragedy.

From the first two paragraphs you may have anticipated a disturbingly thought-provoking tale that borders on nihilistic in its repulsive take on a classic Cinderella story? Unfortunately, Midori is far too preoccupied in featuring as much twisted imagery as possible, whether or not it has any relevance. As the disturbing content escalates into an intense inferno of immensely haunting images of absolute terror, the narration loses its initially morbid flare to incomprehensive, yet interesting slideshows that make it painfully clear that Hiroshi Harada's true passion lines in twisted artwork rather than storytelling.

Animation: 7/10
I'll be seeing more of Midori's imaginative and repulsive imagery in my nightmares. The director who animated the movie single-handedly does not hide the fact that he treasures grotesque visual expression over beauty but by no means does it change the fact that his work is memorable and disturbing.

Movement is limited due to financial reasons and nobody would ever mistake Midori for anything but an independent feature, but the stills are skillfully animated to repulse and shock, questionable tasks that they nonetheless succeed in.

Sound: 3/10
Despite suiting the material relatively well, Midori's soundtrack is surprisingly forgettable. Furthermore, given the controversial content it's no surprise that Harada had to rely on voice actors whose experiences must be close or equivalent to none as the performances throughout the movie are passable at most.

Characters: 5/10
Contrary to Tod Browning's Freaks which portrayed deformed circus artists in a fairly humane and positive light, the characters in Midori are mostly repulsive enough to really warrant the derogatory term "freak". As they disregard any form of mutuality or decency in their sexual activities they work surprisingly fine as the semi-antagonists who abuse the poor and innocent Midori to the borders of madness.

She herself leads a tragic existence. There are some optimistic parts of her life, but they all end up inevitably defiled by those around her and without anything worth enduring seemingly perpetual misery for, she ends up in a pedophilic relationship with a magician whose strange magic sends the story into a surreal and twisted world. The characterization in Midori remains unambitious but can also be described as simplistically sufficient.

Overall: 4.5/10
The word "pretentious" is constantly misused to describe anything intelligent or artistic regardless of its execution. This is one of the cases where it actually fits as Midori seems to regard itself as a visually distinguished journey determined to expose the cruelty of mankind and the darker territories of love, whilst only managing to deserve the first description. Viewers looking for something disturbing and morbidly fascinating would be wise to give this infamous sleazefest a chance while any other form of audience should avoid it at all cost.

This was distrubing, had graphic violence (animal + human abuse) and just all round made me uncomfortable. The animation was bad (although i understand that it was made in 1992) and the side characters were so horrible to the mc. I fully understand why this was banned in Japan. Watch it if u want, but i don't reccomend doing so (ESPECIALLY IF U HAVE A WEAK STOMACH)

I am giving a low point of 1, not because it was badly made or anything. It just disturbed me so so much that I never want to be recommended anything similar. It wasnt scary in a way a jump scare or a ghost story would scare you. But it had zero fun, zero positivity in it. You know how even in horror movies, maybe there is some humor, maybe you connect with a character, maybe there is an emotional scene that makes you cry. Nothing similar in this. No emotion but being disturbed and disgusted. Its been few hours I've watched this and I am still feeling the negativity from it.

But overall: very disturbing, you will be disgusted and it will linger. But if you like this stuff, definitely a must-watch.

I.. Have no clue on where to start?

I mean, i really didn't like it, the animal abuse was a lot for me, but i believe that it's an (maybe) important film? Or more like the message behind is important, someone out there, in the real world has/is experiencing abuse, and it's valid information!
I believe that if you haven't experienced any kind of abuse you would be thinking about it daily, but this movie makes you think about it...

I, for some reason wasn't touched too much by this movie? I get the message, but it's not that bad, I think it depends on who watches it.

I like the art a lot, reminds me a little bit of Junji Ito's work.

The reason i gave it 1/5 was because of the art and the message.

I don't really know what to say, i feel i'm missing something, but i'll change it if needed:)