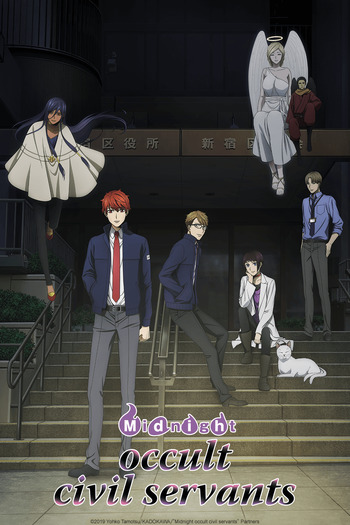 Let me begin with that this is show is underrated. I heard no one talk about it when it came out which is kind of sad, so I am going to give my honest opinion on this show.

The story follows an episodic format mostly, but there are a few stories that form part of the world. I also liked that they didn't stick with only Japanese mythological creatures, but we also got to see some from different cultures too. I actually even did research on the Aztec god, Huehuecoyotl because this show mentioned him. The concept may be something that you have seen before, but the stories has themes about relationships between humans and supernatural creatures and how you can always rely on them following human morals since at the end of the day they're not humans. The theme of coexisting is strong and the way it is executed is pretty nice, however there were a few things in the story that were left unsolved, which I can't get into specifics without spoiling the show.

For the character design, we have the guy who made the same design of the anime Love and Lies, which if you have seen Love and Lies you can tell the characters were made by him. The animation in this show was pretty standard, but it did have some really beautiful scenes like a garden scene that we get to see and another scene in the later episodes of the show. Overall, the quality of the animation maintains itself in this show, and the character designs manage to keep the show interesting.

The guy that made the music for Violet Evergarden was behind the soundtrack for this one. Also, we get an OP sung by the main character and I am kind of a sucker for those. Both the OP and ED were pretty catchy songs and the rest of the soundtrack was on par with the anime. This guy knows how to make music.

I liked what they did with Arata here, he may be soft-hearted, but he's aware of his limits and knows that being too sympathetic may cloud his judgement as well which is a nice change from the standard nice guy. For the other two, I would have liked to see more of Seo's past as we did get to see how Kyouichi ended up joining the organization, but in one of the episodes we get some mysterious flashback regarding his past job which we never got clarification for. Also, there was an interesting character that could have gone against Arata's beliefs but due to the show's runtime we never got to see him oppose Arata on a much grander scale.

Despite this show not being perfect, I recommend people to give it a watch as I actually ended up enjoying this show much more than I originally thought I would.

At first I didn't think I was going to enjoy it but in the end I really liked it! I highly suggest this if you're into  Adventure, kind of emotional type anime. It definitely isn't boring!

The story and structure of this show is really nothing new but is well executed. Is very similar to Natsume's Book of Friends, the type of show that makes emphasis on the understanding of different cultures, personalities, and ideologies; using the Yōkai (supernatural monsters, spirits, and demons in Japanese folklore) as a simile for what the show is trying to say.

The show is mostly episodic with a few stories spanning 1-2 episodes, but there is a progression done through character development, which is what keeps this show together and entertaining. The animation is on par with other animes of the time, nothing too fancy, but it has good character designs that help keep the show interesting. The stories present and contrast different aspects of the human/Yōkai relationships that are increasingly more complex and dangerous. There is little comedy and some slight mysteries are presented.

Sound effects and music are on par with the show feeling and the dub is pretty good, I prefer to watch dubs for these types of shows where the dialog is more predominant than graphics and action.

Overall, this show may not be for everyone, you'll especially like it if you enjoy slice-of-life shows that deals with customs and understanding, everyone else may be better moving into other shows.

I know it's a jaded thing to say, but this show is painfully underrated. I enjoyed it so much. The premise is interesting, the characters are incredible and I just couldn't stop watching. Of course, like any anime, this had it's downsides too. But if you like action, mythology and good characters, this is a great anime for you !

I've been on a youkai-theme anime binge lately and this one was truely fantastic! ...Where are the fans??

STORY I love being thrown into a new world just like the main character is. Arata just got hired for a new job, not fully understanding the scope of what it entails... It's an obvious shock then to find out that fairies, gods, and demons are real! And... he can talk to them?! The rest of the plot follows Arata and his coworkers, mainly Seo (that's a man btw) and Kyouichi, as they solve mysteries and help youkai around the city stay peaceful in coexistence with humans. The pacing (not revealing too much too soon, a mix of action and down time) was really well done, and the multi-episode arcs were always thrilling. I fail, like many times before, to express the greatness that this story offers! So please understand it's so much more exciting than these bland remarks I'm offering you...

ANIMATION I've heard some say this anime got cheated on its visuals, as it is a 2019 anime, but honestly it's fine and I don't think this is the point that is going to make or break if you watch this show anyways. I did notice they really struggled drawing glasses from the sides - it was kinda funny, but admittedly a bit distracting at times. All together though, there isn't any major flaws like choppy action scenes or exceedingly crappy cgi elements that many other shows exhibit.

SOUND Ah, it has been a while since I had a series that made such a nice impression with such fitting tracks! I totally loved the subtle jazziness to some of the themes, which wasn't that blaring-in-your-face kind of jazz - no, this was just the kind that fills the backgorund with a pleasant white noise. Besides jazz-ish, the other music depended on the setting and what charcaters were present. And I know that statement is generic enough to apply to literally any setting, but what I mean is they often tailor the sounds to the kind of youkai they're dealing with. This variety actually worked surprisingly well together, and the later folky-village themes really stuck with me.

CHARACTERS It's always harder to develop your charcaters fully in a 12 episode series - just when you've gotten to know them the best, it's over... But, that doesn't mean we aren't satisfied. Arata showed immense growth from when he first started his job. He gets more courageous, more spirited... more cool kekeke~ We don't learn much behind Seo, but Kyouichi does get a decent episode arc of his own that makes for one of the biggest mysteries and climaxes of the show! As a whole, the cast is almost soley* male, if that's a plus to you. *Arata does hang with this one chick a few times, but even when they go to a festival together (basically a date) there isn't really any romance there. Even after a jacked up experience when the guy usually has the perfect chance to comfort the girl with a hug or kiss, she just walks home on her own lol. I'm actually glad it was like this and it's nice to have a girl around who is just a gaming buddy. Romance isn't everything.

OVERALL When I, and the others here, tell you that this anime is underrated, we actually mean it's hella undeerated. It is not boring in the least even as it covers work life, but it's not constantly action so it's not a thriller either - it's a relieving balance of the two and the little mysteries they let you chew on keep you interested and engaged. Definitely something you could watch in one or two sittings!