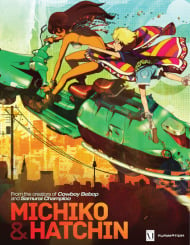 Hana is a nine-year-old girl who lives in constant fear of her abusive family; Michiko is a sexy woman who has just done the unthinkable: broken out of the impenetrable Diamandra Penitentiary. After Hana is whisked away by Michiko, who claims to be her mother, the duo sets forth on a high octane ride towards freedom. In the streets of Brazil and aboard Michiko's motorcycle, Hana and Michiko will look for Hana's long lost father, try to learn to co-exist and get along together, and stay one step ahead of the police and afro-clad Atsuko.

This anime is so underrated, it hurts some say. Well I say it is very much so. I finished it and enjoyed how it was executed. Each episode (like 'em or not) had a purpose on explaining how Michiko and Hatchin need each other.  The story really hit home. The leads, Satoshi and Atsuko all had good backstories and less importantly the music and animation were pretty good. Though I'm not a fan of manglobe's character designs they do pace things well. I knew how Hiroshi was gonna turn out and I was less than surprised when what happened, happened. It made me laugh what Hatchin said about it though. Though I think the biggest treat through it all was Hatchin herself. She was more of the guardian to Michiko rather than the other way around and it made my day, whilst Michiko was reckless and angry and acted like a kid. Making the duo well balanced.  So I'd recommend this to Cowboy Bebop and One Piece fans primarily, but I'd see ANY anime fan giving this magnificence a go. And to put a cherry on top, FUNimation dubbed it so it's good english.

I came to view MtH as a weird combo of Black Lagoon meets Cinderella … in BRAZIL ! It has a hot MILF with guns and a cute loli… without them. It has great animation, gun-hos, immoral and dirty characters, an exotic setting, a somewhat coming-of-age story, a family bonds flavour between shootouts, and lots of flashy car chases. What can go wrong?… Um... well… it’s not like it did anything wrong. Simply said, there wasn’t enough material to keep you interested for a full season worth of duration and the chemistry between characters and the magic of the setting were not that complicating to get used to and eventually get bored of. This is relevant of course as some people get bored a lot harder than others. To me, this ranks amongst the better in the field; probably third after the “let’s talk philosophically about how immoral the world is before we start shooting at everything” Black Lagoon, and the “let’s have good personal drama for a change before we start shooting at everything” Requiem for the Phantom. All the rest of its brood are monotonous and apathetic (screw you Bee Train!), and the gloomy setting is just too depressing to care following it through after awhile. MtH does a better job; it is mostly light-hearted, balances the dark with the exotic, has perky characters, has humour, and has some interesting battle sequences. These helped me not to get bored right away… five whole episodes that it. Beyond the flashy exterior, this is still a mostly guilty pleasure series, with shallow conflicts, unrealistic battles, and convenient plot armours. As long as you can suspend your disbelief, all that can actually work on its favour, but as I said it still has very little going for it in terms of context. Here, lets me tell you what it’s all about in a nutshell: “Well, duh, there is Brazil and, duh, some MILF gets out of prison and goes to take her daughter and, duh, they are being chased around by police and, um, they shoot stuff”. There you go, not exactly a mind-boggling plot, is it now? Any attempt to be dramatic or serious is replaced fast with good old fashioned shootouts and the grammar/pronunciation of the native language is problematic as usual.On the other hand it’s not like the characters are flat as pancakes or something. You actually see how they somewhat develop and the finale of the show is actually quite bittersweet and better than 99% of anime endings. It feels logical in a way, not far-fetched or fake. The thing is, as I said you will most likely lose interest along the way because of the loose and simplistic plot. In all honesty, this show did not deserve a full season with the context it had.Anyways, it is not a bad anime if your expectations are not too high. It is rather different than the norm, has good production values, interesting characters, and it’s not a ridiculous Brazilian soap opera (although it moves in the same speed). It has otherwise a low replay value since its context is way too simplistic to offer you anything more with a second watch, and the duration will be painfully boring if you know what will happen later on.