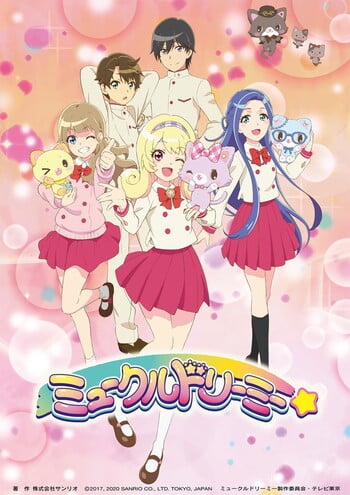 A middle school girl named Yume sees something fall from the sky, and meets a pale violet-colored kitten named Mew. It turns out that Mew has the power of "Yume Synchro" (Dream Synchro), the power to enter dreams. In the dream world, the girl and Mew collect Dream Stones.

I had not planned to review Mewkledreamy.  I am still wondering how I got to start viewing it and stick with it.  The series is cute but shallow ... a kiddie show, after all, and this to sell toys and merchandise.  Charming opening and closing themes, but the animation technique not well defined.  The plot struggles with a lightweight premise of  a girl (Yume, Japanese for ‘dream’) who has come across a magical plushie cat who grants her powers to enter dreams through the magic of Dream Synchro and resolve issues and nightmarish influences.  In one dream, out of another.  Predictable routing of the adorably lovable but diabolical force of nightmare action, Yuni and his two-cat team of annoying sound effects, Hagi and Tsugi.   The series was rushing toward an end of mediocrity.  Then, in episode seven, an intriguing turn of the plot. And it all has to do with the simple concept of the ‘childhood friend.’ But we need to fill in some of the backstory.  Yume is first-year of junior high with typical nervous anticipations of how she will do.  Attending with her is her neighbor Asahi, a promising tennis player looking forward to joining the squad.  He is happy to be the ball-boy for the team and work his way up.  They've grown up together ... Yume and Asahi are ‘childhood friends.’  Yume joins the cheerleading club and becomes infatuated with Haruhito, the ace on the school tennis team.  But he is idolized by the entire female populace,  However, because he is Asahi's team captain, Yume does get a chance to meet him, and learns that he is constantly seen with classmate Yuri;   she is the school vice-president and an impressive girl.  Yume is dejected but takes courage when Haruhito describes Yuri as a ‘childhood friend.’  They’ve known each other for years and are comfortable together … but just as childhood friends. Now, back to episode seven.  The story centers on Asahi, who is preparing to take on his first tennis match with a credible opponent.  Asahi is extremely distracted, and Yume decides to invade his dream with her partner Mew (lavender colored kitten) and two other dream-nauts Peko and Suu.  They work to cure Asahi of the stress that had been developing in his dreams, but Yume is stunned at one sidebar incident in Asahi's dream ... she is in the dream herself.  Yume cannot understand why she crops up in Asahi’s dreams.  Why ever for? Yes, Asahi, Yume's childhood friend, has a crush on her.  This reminds me so much of Megumi and Seiji of Happiness Charge Pretty Cure!   These two were neighbors of the apartments where the two often chatted on their respective balconies.  This started out as nothing at first, but through the episodes you had hopes for someone to confess love for the other (a lot of this boy-girl stuff was going on in HCPC, one of the reasons that this Precure storyline was one of the franchise’s best).  Then, when the forces of the Phantom Empire bit the dust, and Happiness Charge ever after was in the offing, we viewed the closing with the two love marbles sitting side-by-side.  Now, for Mewkledreamy, will Yume figure out how Asahi feels ... will she care? All this on a story structure that is rickety with adding of new characters at this late date with no promise that the series will be granted another 13 episodes.  But there are things to admire:  the teaming of those defender of dreams Yume and Mew, the chemistry of Maira and Peko, the next possibly great Manzai act, and Kotoko and Suu with their mindedness to be a positive influence.  Still, while all the plushies have the power to enter dreams, only Yume is the only human to interact in other’s dream states.  The dreamscapes are appropriate for youngsters, and Yuni’s nightmare attacks seem sophomoric than anything else.  Still, he’s supposed to lose, even to go down trying.  From Yume’s mother’s spending madness to cousin Nana’s cute misbehavior, the dreams are vividly wild and imaginative. But there are more things to try to stomach: bad guys who can't duck their own version of cuteness as they inject the 'black abyss' into their victims’ dreams (hagi hagi tsugi tsugi ... noti noti on my watchi watchi).   The sketchiness of the dream state as Yume and her dream team must handle the business of dream therapy during the waking hours when the victims seem more distracted than dozing.   And the endless influx of more characters when the story should try to focus on the main characters and their own set of dreams and desires.  There is even the danger of a possible love triangle which might not get past one. I don’t expect Mewkledreamy to get a second season.  But there is a sort of magic in the world of anime.  Maybe dreams do come true!