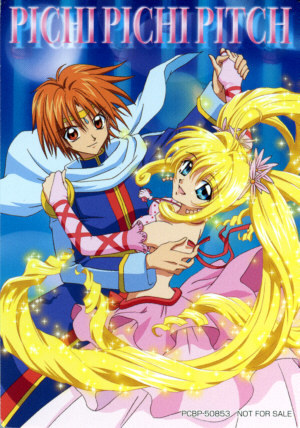 Hhhhhhhhhhhhhh, I have a love/hate relationship with this anime series.

First of all, I grew up with this anime, and in my childhood, I was obsessed with it, mainly because I didn't know what flaws were, I would say,

"Its made by TV people, its gotta be perfect!"

Now that I'm grown, I start to realise what's wrong with this anime. Don't get me wrong, I freaking love this anime, what is good about it, is really really good.

Luchia is your typical teenager. She's young, and won't stop chasing that one guy, who at first, was a douchebag (but we'll get to that moron later).

Its always Kaito kaito kaito, does she ever worry about her studies? I know I know she is a mermaid, but even her duties as a princess don't seem to matter(until later on) when she's with that one guy. Did I mention he only likes her mermaid self? Is she encouraging him to two-time this mermaid(who IS her, but he doesn't know that) or what?

I do sound like I hate Luchia, but in the thingy that askes if you love or hate this character, I said I loved her.

She is passionate. Yes, she's annoying, but she will do whatever it takes to save her friends, and at times, is shown to treasure her background greatly. She's a pretty fun character.

Now Kaito,hhhhhhhhhhhhhhhhhhh, is a brat. He doesn't know what he wants. I mean, he ows Luchia his life, but he finds himself in a terrible position. He doesn't know that his mermaid and earth-girl are the same person, and just proceeds to have fun with both of them. I'm not going into detail about this character, cuz i just hate him that much.

Hanon, is just irritating. She, like Kaito, also doesn't know what she wants. She's in love with her teacher, which is fine, but hearing her yell "TARO CHAAN" all day is not exactly a pleasant feeling. She knows he is in love with someone else, and does she noe know that he can get arrested for being with a student? Its illegal, and its pedophilia, and she cant be more than 15 years old (besides her mentality of a 4 year old)

Rina, is alright. She had a dark past, where difficult decisions were made. People go through that. Yes, she does go through that annoying stage where she mopes and dopes more than she needs to, but everybody goes through that, and they get over it, and Rina, despite her terrible past, gets over it. She didn't even need a man for her character development, although she does find a boyfriend, but that took time, and they built a mutual relationship on true love. She is my example of an awesome character.

The songs, are fun at first, but get annoying when they are played over and over for the next 20 episodes. That is all I will say on that subject matter.

Now that I'm done bitching about this series, what is good about it?

The story. Yeah, this is one big anime with a lot of emotional package. Sometimes it is irrelevant, but other times, viewers are really invested in what is happening. For example, in episode 50-52, towards the end of the first season, a lot of shit is happening, including that long-awaited "KAITO IM A MERMAID", annoying as it was.

All in all, its a good series.

I liked the series at first but there were several things that didn't make a lot of sense. The most confusing part was the ending I didn't understand the concept of it doesn't make sense.