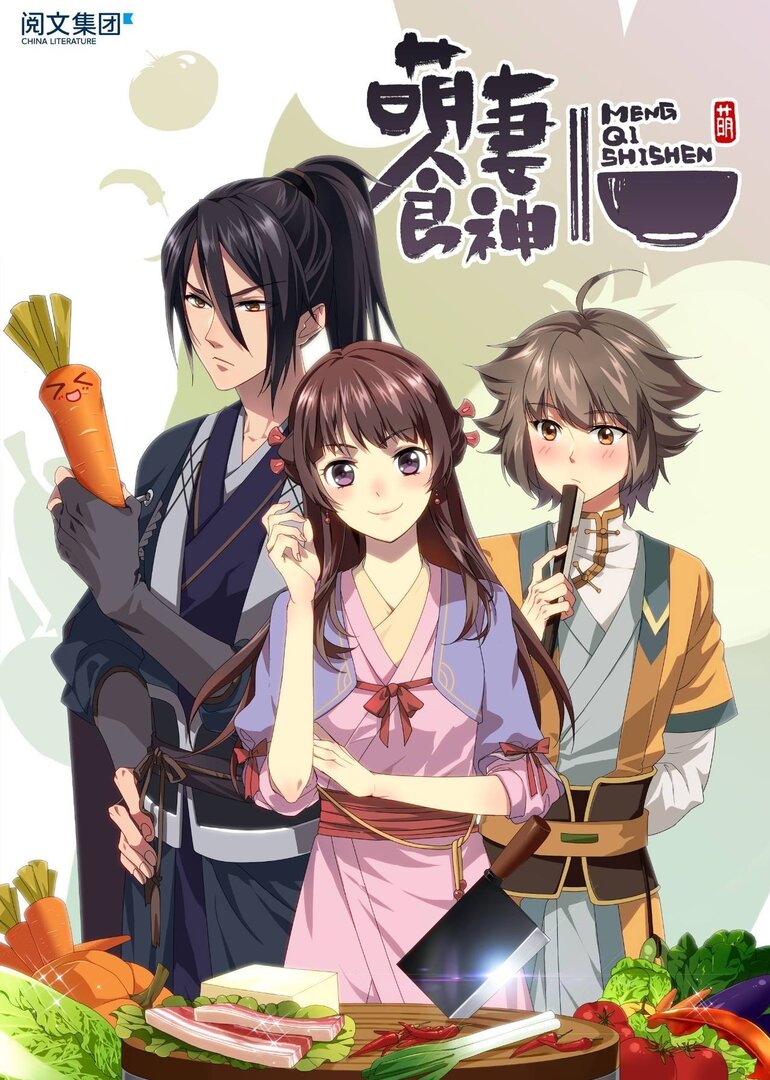 This story was amazing, people who loves anime about the food, and like historical love stories, definitely should watch this anime :)

But the in the ending I wanted to see more, so I hope so there will be second season. :) So I hope so you will wachw this one, good luck ;)

This donghua (anime) at first seemed to be very similar to Food Wars!: Shokugeki no Soma, with much of the plot revolving around the dishes that the main character makes and slightly toned down cut scenes of the characters being transported to some surreal place upon taking a bite. However, the setting being in ancient China and the transmigration elements add another layer to the show that makes the plot more interesting.

Apparently, the donghua is based off of a novel, and while I have not read the original work, it seems from watching the show that the characters and plot development were very rushed and haphazardly put together. I would imagine that this is a byproduct of the transition from novel to anime, but it left me feeling like it could have been so much more.

All in all, I was still very entertained by the characters and humor (and I ended up watching the entire show in one night).

Honestly, this is such a light-hearted and cute anime but with a good romance plotline. The ending was based on having a season 2 so it didn't feel as fulfilling of an end as it should. It is super cute and funny (not to mention how hot they made guy MC). I would definitely recommend especially if you are trying to heal from a dark or sad anime :)

This show peaked my interest solely due to the fact that it's chinese animation. Something I've never seen before. If we are going just off of the visuals, its quite pretty. Something about it is different...I know nothing about art but the backgrounds look detailed and polished while the characters look pretty sometimes but a bit rough and flat compared to the background other times. I'm sure the budget was quite low so considering that its actually impressive how good the animation is at times. Like the fight scenes are pretty fluid, though they put this blur and shake effect on it that makes it hard to see it fully.

Sound: I don't have much to say except that the quality of the mics didnt seem to be as good I guess. The main character loves to scream. Actually there are many characters that talk a bit loud and I wish they would turn those parts down more so it doesnt hurt the viewers ears. The sound also sounded very flat. At some points like during fight scenes the voice actors sounded too clear. The voices don't blend with the environment. During the fight scenes it felt like two people in a studio dubbing a fight...not two people actually fighting. Took me out of it.

Music was fine, nothing I'll remember.

When it comes to the story....not mentioning the fact that the show ends without a conclusion (unsure if theres gonna be a season 2) the episodes are repetitive until you get to a certain episode which makes you think things are going to take a turn, which it does for 2 episodes and then its back to the usual with the main character being the best chef in ancient china. For a story about cooking that uses fantatistical scenes to visually show how tasty her food is, its sort of boring. The food scenes are similar to Food Wars, but unlike Food Wars instead of being ridiculously hilarious, its mostly cringy. I believe its because of the tone of the rest of the show. It feels like I'm supposed to take these scenes seriously even though I know its supposed to make me laugh. Speaking of cringy, the way the main character drools over the male lead is super cringy to look at. They put this fuzzy pink background on this man who yeah is handsome, but supposed to be a cold intimidating fighter guy. Idk it's like the show wants to include all of these elements from cute japanese shoujo anime, while simultaneously being a semi-serious ancient chinese political action and then its also food wars. Not that it cant be all of those things, but the show isn't long enough nor big enough to do it. Kind of a mess. I say all of those bad things but it wasnt horrible to watch. I still enjoyed it for what it was.

As for the characters, im not going to go into the depth of the characters, because there really isnt much there. But I did like them. The main character's voice got on my nerves since she was 24/7 whining or yelling, but besides that she was still likeable i guess? She didnt have much going on besides being a star chef and being "fiesty" as they called her. Other characters were forgettable. Feels like we couldve learned more about the male lead in another season. He's just your typical cold guy who is good at fighting stuff and nothing else. There were certain characters on the poster I thought I would see more from, one in particular had a pretty dramatic death scene, but the show didnt really introduce them to us so I didnt feel anything...even though it was clear I was supposed to be like "nooo dont die".

Overall it was cool to see just because I've never seen anime from China or a "guoman/donghua" as they call it (quick google search). Nothing to write home about. But if you have nothing better to do might as watch a quick 12 eps just to see.

Great show! Would definitely benefit from a second season, but other than that I have no complaints.