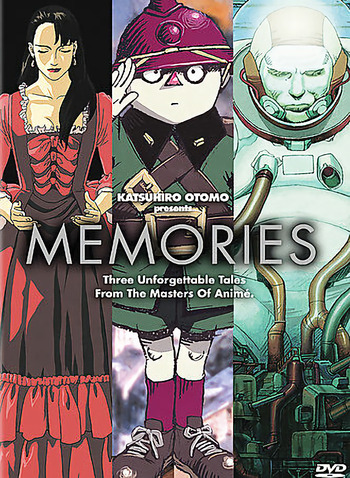 Three separate science fiction stories, each with a different setting and feel. The stories vary from good to dull and in my opinion episode 1 is the best and episode 3 is the worst. Episode 1: Magnetic Rose, is a story about space junkers who get a s.o.s message and go to investigate. Story is great 8/10, having elements of horror and a suspenseful athmosphere. Animation is great 8/10, crisp colors and smooth movement. Sound is great 8/10, especially the opera singing. Characters are great 8/10, particularly Heintz and Eva. Episode 2: Stink Bomb, features a dumb man who has a flu and after nothing seems to work, he decides to try an experimental medicine. Through his stupidity Nobuo creates a super gas weapon inside his body, that kills every other moving creature except for him and when it wants to it messes with electronics. While driving towards Tokyo even though he was told not to, the military decides to bomb him and after literally thousands of missiles miss him he proceeds on his journey. The ending makes no sense, supposedly Nobuo got inside one of the suits but the body bag was moving, which is impossible if there was someone other than Nobuo inside and no one, not even one of the other suit people bothered to confirm where Nobuo was. And then proving that he is the dumbest person on the planet, he arrives at the Tokyo headquarters and still doesn't realize he is the source of the gass, 5/10. Animation looks good, 7/10. Sound is probably the best part of this episode, 7/10. Nobuo is stupid beyond saving, I kept hoping he would understand that he is the source or that he would get captured/killed, other characters are ok, 6/10. Episode 3: Cannon Fodder, is about a society whose only job is to wage war, the men work in shooting giant cannons everyday, the women work in factories producing ammunition and the children learn about war tactics in school. The most interesting part of the story is that some citizens are trying to get better treatment for the cannon loaders, 6/10. Animation has that steampunk aesthetic, but grey skinned people who look quite unappealing, 7/10. Sound is ok, nothing stands out either in a good or bad way, 7/10. The child is selfish and the other characters get no developement, 5/10.

A great trilogy overall - the varied, unique soundtracks in particular blew me away.  Animé 1: Rating 4; haunting, isolation, space.  Animé 2: Rating 3; mainly for the soundtrack. I think I saw this one a bit like a music video.  Animé 3: Rating 5; long and demanding, but hardcore, technical, pointlessness, 1984-ish, depressing.

Memories is a movie-length science fiction OVA divided into three separate stories. While not exactly dystopian in nature, the future looks like a somewhat depressing place based on these unrelated "memories" episodes. Episode one - Magnetic Rose. Animation blends both detailed photrealistic drawings and traditional line art cartoon-style drawings well. Music is haunting and evocative, with a cyber-feel to it. Incidental background sounds integrate seamlessly into the story and effectively establish mood without ever feeling intrusive. I had a feeling of deja vu while watching this one. The story of a space-debris collecting team receiving an emergency SOS distress call and responding to it to find an abandoned area of space (a "Sargasso Sea" space graveyard area of floating debris and wreckage) and an alluring siren call beckoning them inward, seems somehow familiar to me. Two of the explorers from the rescue ship enter the distress signal area. They are caught up in the still functioning computer-programmed dream reality of a long-dead opera diva named Eva Friedel. Eva created the program as a refuge to live again with her dead-husband and she resided for many years alone there after retiring from public appearances. The rescue turns sinister when the two become inextricably interwoven with the dream-reality's main plotline of never allowing Eva's husband to ever leave her. This chilling tale explores love lost and the desperation of a lonely person determined to regain and keep such a love that was so precious ... whatever the cost. Episode two - Stink Bomb. A change in pace is signalled by an overly cheery television segment's syrupy canned Good morning introduction. Animation for this is more traditional and music is a louder, jazz-infused score which sometimes overpowers the video and dialogue. In an attempt to cure his cold, a researcher mistakenly mixes medications and awakens from his rest afterwards to find all personnel in his research facility collapsed and himself involved in a plot of government intigue. The hapless researcher, unknowingly spreading death and destruction wherever he goes, becomes a target - of assassination and kidnapping attempts. An ironic tale of the fate of an unlucky soul being kept ignorant of the plots around him while managing to be in the wrong place at the wrong time. Episode three - Cannon Fodder. This story begins immediately after the fadeout from the last story, and jumps right into the start with a clanging alarm clock going off. Animation designs for machinery and background seem fairly realistic and typical; character designs and people less so. These are not pretty, and not designed to win us over. Background soundtrack is more than serviceable, and generally works well for the anime. Ending theme is a rhythmic electronic tune. The story shows us a rather bleak glimpse at an industrial town, featuring select scenes from a typical day in the life of a family, who lives and works in a military support town, where life is focused on the maintenance and firing of the great cannons used in the ongoing war effort against an unseen enemy. It's a tale that shows some of the daily results of a life spent under strict discipline and of obeying orders. Each story presented is a short portrait giving each director's memory impression; we get a provocative flavor to ingest but no real nourishment. Each is just a thought presentation; no story is fleshed out enough nor are characters developed enough to cultivate a strong and lasting impact. 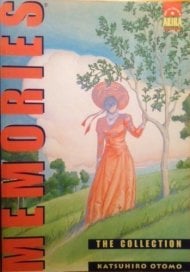