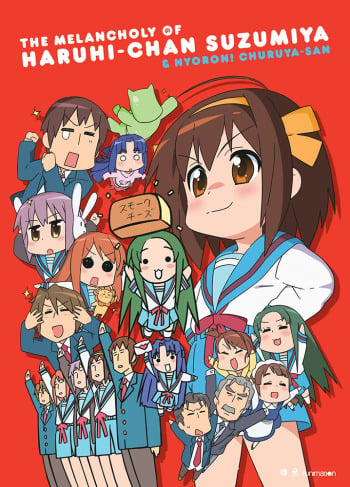 This is about A comical spin-off of the popular "Melancholy of Haruhi Suzumiya" anime series that originally aired back in 2006 involving all the major characters in more child-like forms of their animated selves going through various spoofs of previous plot line; like Nagato and the dreaded laptop with a twist. face offs with the rack of costumes that were stuffed in the corner of the club room. and dodge ball tournaments on a sugar rush. 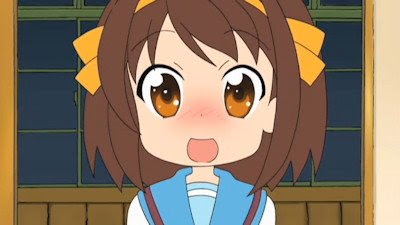 Yeah, it’s a random spin-off. and this spin-off is awesome. Well, for the most part. During the first 4 episodes, there was some CGI animation, but afterwards… Kyoto Animation went back to the 2D Animation while staying true to the chibi designs that distinguishes the Main series of Haruhi Suzumiya. Haruhi-chan is a Kyoto Animation production. It is indeed a spinoff of the series and this is not a TV anime, it is a web series. As far as web series go, the animation is quite good and for it being made in the same year as another web anime known as Hetalia. Haruhi-chan does look impressive for being an Original Net Anime, assuming ONA’s have lower budgets than TV Anime and OVA’s. Despite the first 4 episodes being CGI-animated, it looks great. 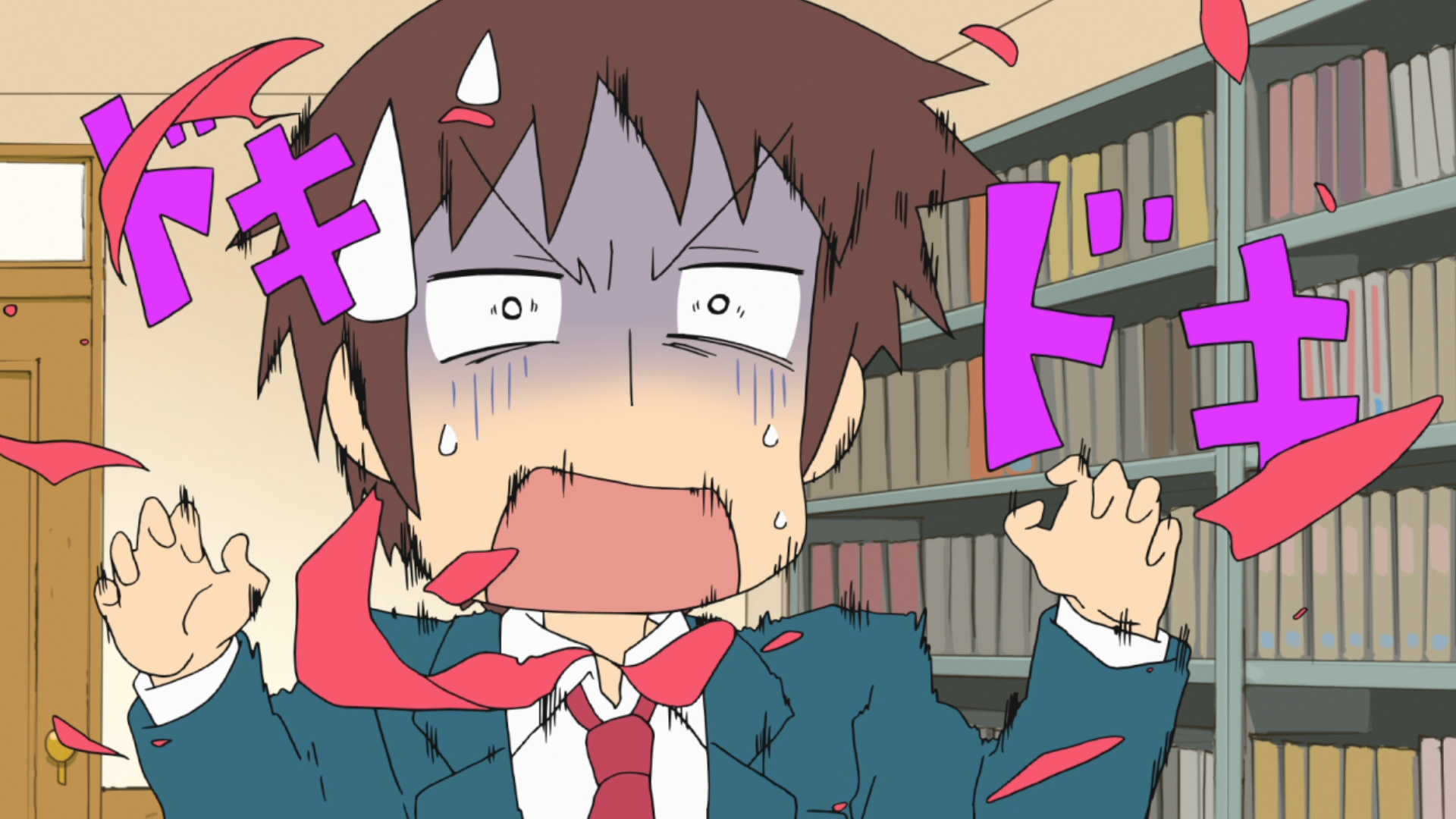 Like the series, The Japanese cast and English Dub cast do not disappoint and both casts do step it up by making the comedy work. I already said enough about both casts when I reviewed the series.

When it comes to characters, everyone is in chibi form and this helps to differentiate from the main series. Since this is a spin-off, I can tell you that you may want to give character development a pass since this is a spinoff that puts heavy emphasis on humor and laughs. Everyone is over the top and even Yuki Nagato is funny in this one. If you liked the characters in the Haruhi Suzumiya franchise. Chances are, you’ll like this spin-off just as much.

If you got an hour and a half, The Melancholy of Haruhi-chan Suzumiya does not disappoint as a spinoff. It’s just as fun as the main series but it is more funnier than the main series. Like the series, this is a great one to watch with classmates if you are in high school or college.

The Melancholy of Haruhi-chan Suzumiya was available by Bandai Entertainment and it was released alongside Nyoron Churuya-san, but unfortunately it is out of print.

With all that said, The Melancholy of Haruhi-chan Suzumiya is a fun spinoff to the popular Haruhi Suzumiya franchise. The animation is good for an ONA, character development and plot get a pass, but it is a fun series because of how funny it is. It is an awesome spinoff.

I give The Melancholy of Haruhi-chan Suzumiya an 8.9 out of 10. it is VERY GOOD!

Feel free to leave a comment and join the club.

Hilarity ensues as Haruhi and friends are chibified and have the eccentricities of their personalities magnified to explosive proportions! Haruhi comes up with crazier activites for the SOS Brigade, while Kyon valiently tries to keep up with witty comebacks. Nagato has become a hardcore Otaku and keeps a miniaturized Ryoko Asakura as her personal play toy! Mikuru's gullibilty reaches new levels as Haruhi and Tsuruya come up with ways to take advantage of the poor girl. If you are a fan of the original Haruhi series you will most likely enjoy this series as well. By itself this is a series filled with great short skits and amusing punchlines.

Story This series is not really much for story, being that it is a short skit and gag anime. If you watch the original series The Melancholy of Haruhi Suzumiya then you get the background story behind the skits and that helps the punchlines reach there full comedic potential but this is still a good series by itself. Try not to worry about the lack of a regular plotline with this series, it is not meant to be viewed as a series with a significant story.

Animation The animation for this series is made to emphasize the characters humorous reactions and interactions with each other. Not an overly sophisticated style but it helps make the characters funnier to watch. The charm of Haruhi and the gang makes them an amusing and endearing group. The reactions of the mini-chibi Asakura-san are especially cute and hilarious.

Sound Nothing spectacular in the sound department but the music and gag noises work well with the comedy.

Characters This is where this series really shines. The characters are hilarious! Otaku Nagato knows no bounds as she plays tons of computer games and teases Asakura-chan mercilessly. Haruhi is continuously scheming and her plans tend to make life difficult for the easily targetable Mikuru. Koizumi tends to watch from the sidelines with a smug expression. Tsuruya and Mori-san the maid develop a fighting rivalry. Meanwhile Kyon does his best to keep the world safe from the chaos of the SOS Brigade whilst increasing his repertoire of smart remarks. Took off half a point due to lack of character development, but that's not what this series is about.

Overall Filled with laughs to beyond the breaking point this is a great series if you're looking for something funny and in no way serious. The short 2-5 minute episodes throw punchlines faster than a superpowered dodgeball player and will have you more hooked than a computer game addicted Otaku! I'd recommend this series for anyone that wants to watch something light-hearted and amusing.

Btw I rated this as a gag anime, while it's great for a lot of laughs it lacks a fleshed out story you'd find in your average anime. For that watch the original Haruhi.

Given the choice between a nice, calm, every-day-life sort of anime, and one crammed to the brim with meaningless supernatural drivel, I will, of course, choose the former. Any level-headed person will agree, obviously.

Haruhi, melancholy, that train-wreck of a title, starts off as the former. I enjoy seeing the regular high-school shenanigans of the gang. They are all well written characters who are simply a joy to watch prance about. The dialogue sounds natural, they are acceptably (If not averagely) drawn, and they're even funny (!) at times, who'd believe that?

Then, and you'll start cursing yourself when the show reaches this point, they dive into the trite supernatural shit. God. Anime producers and writers of the world, hear me clear! No one wants to watch this! Thanks for listening.

But honestly, I lose any and all interest in Haruhi here. They take their amazing characters and stick them on the back-burner while aliens and..."espers" (Whatever those are) steal all our screen-time. They aren't even integrated into the show well. It's just "Oh shit, aliens, here ya go." And we're supposed to accept that?

No sir, that won't fly with me. You may choose to turn a blind eye, but this is bad writing at it's finest. Sure the dialogue still is well written, but the plot? God no. Things happen out of nowhere with little to no explanation, and sometimes there is just too much explanation! Show don't tell, learn it guys.

Odd to have two polarizing complaints, but Haruhi finds new ways to be terrible.

Speaking of pitfalls, how about that continuity. True, this is a writing problem, and I hate to keep harping on the same thing, but this deserves recognition. From one episode to the very next, things just...change. Inexplicably! It's like I'm watching the episodes out of sequence. (I'm not.)

But that dialogue, I'll keep saying, is a saving grace. It interjects the show with little laughs amongst the overriding shit, and greatly brings the enjoyment up. It's stopping me from rewarding the show with a one, even!

If you can watch just one episode here and there? Perfect! Never, and I mean never, watch this entire series. That is a recipe for disaster.

I actually like this better than The Melancholy of Haruhi Suzumiya.  The main show is good, but can take itself a bit too seriously at times.  Haruhi's more light hearted, Tsuruya-san is in this more, and I have a thing for chibi-style animation.

These light hearted, short stories are fun, cute, and easy to follow.

The Melancoly of Haruhi-chan has no story for the simple reason that it does not need one to be good. This anime makes its impression by using humor and charm. I liked how the humor played itself out throughout ther series. The episodes don't seem to be in any particular order, but each episode is still highly entertaining. It does make a few references to the original Haruhi series, but with this being a spin-off and not a sequel, I didn't really expect there to be much. For the most part, this series was able to capture the essence of that we fell in love with when we watched The Melancoly of Haruhi Suzumiya, or at least the last half of the series. Overall, I enjoyed this series

For the most part the animation had a cute and charming feel to it. The chibi look was great for this kind of anime, and it really set things up pretty well. It was annoying at times when they had the traditional style in the series, and it felt out of place.

Pretty much the same characters as we know in the original Haruhi, with a few exceptions. Yuki Nagato has become an otaku in this series, which I rather liked. Haruhi seemed to be a little like Konata Izumi of Lucky Star at times, which was mildly irritating. Koizumi becomes what seems to be a spoiled rich kid who can summon a maid and butler whenever he wants. That annoyed me a bit, but it was still ok. Overall, I still love the characters as much as I did in the original Haruhi series, and maybe even more.