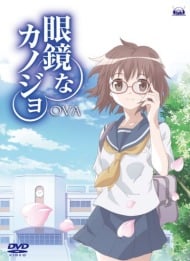 For most people, wearing glasses is a necessity for clear sight, but for four young girls, their spectacles mean so much more. From a teenage girl wearing her glasses with pride and a top idol who uses hers to disguise herself as a regular person, to a couple whose bent frames bring them closer together, a good pair of glasses can not only open your eyes, but also open your heart.

-Story- The stories that make up this series, are a group of short romance stories, where the female protaganist always wears glasses. The individual stories were pretty entertaining to watch, as the story reveals the nature of each couples relationship. I would have to say that the stories did peak my interest. There were moments when the stories did seem cliched and predictable, but overall they seemed to avoid this. -Animation- The animation here is not that great, but its not that terrible either. The backgrounds did seem dead, and I was annoyed with the uses of stills. The characters were designed ok, but the whole series did not seem to have all that good of an art scheme. -Characters- Since we get less than 15 minuted with each set of characters from each story, it would be insane to expect them to have moments of character development. All that we needed to know about the characters is set up early and effectively. While at times the characters did seem a bit dull, it portrayed a wide variety of personalities behind the girls who wear the glasses, which I did like. For the less than 15 minutes that we get with each character set, I felt that they were pretty good. -Overall- I felt that Megane na Kanojo was a pretty good, little short series to watch. I would recommend it to those who do not have a whole lot of time to watch anime, as the total runtime of the entire series is about an hour, and it is pretty good for the time we get.

In a nutshell, the story of Megane na Kanojo revolves around four individual stories about four girls who wear glasses and discover love. Each story is short, sweet, and enjoyable, all at a slow, calm, and not overwhelming pace. The stories aren't especially detailed or chalk full of drama, they're just nice. That's the only way I can really describe it. For the main characters, you had the quirky club president, the pop-idol, the air-headed college student, and the shy high school freshman with their male companions. These characters weren't especially unique or interesting, but they were decent and good for this kind of anime. Each girl had their own personality that set them aside from the other girls in the other episodes, and that is a very great thing that worked out well for this series. Like every other aspect of this series, the art isn't especially great, but works well for it. It consisted of light pastel colors that added a very happy, cheerful, and calm mood overall. The girls were cute, the guys were decent, and the backgrounds were surprisingly detailed compared to everything else. The one thing that stood out for me, however, were the characters' glasses. In a lot of anime and manga, most megane characters have the "cut off" glasses (as I call it) where only the bottom half of the frame and lens show. In Megane na Kanojo though, you see the glasses as a whole, even in different cute designs and colors that went along well with each character's personality. The sound of Megane na Kanojo was surprisingly better than I expected. For a lot of short OVAs these days, the voice acting, music, and overall sound quality has been depleting. However, this is not the case for this series. The voice acting was great, not excellent, but very good for an OVA. The calm background music went along well with each situation and small event that happened in each episode. As for the opening and ending themes, they both were cute, light hearted, and very appropriate for the show. Overall Megane na Kanojo is an excellent short series that can be enjoyed by anyone of all ages. It is sweet, plain and simple, and a cute slice-of-life series that really made me look at wearing glasses in a different way. I think that because of Megane na Kanojo, when I walk into school on Monday, I'll have a positive attitude about pulling out my case and slipping on my pair of small rimmed glasses while getting ready for class. 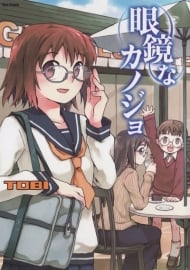