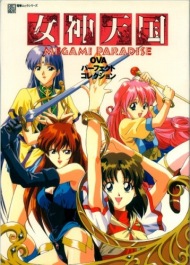 StoryI just need to say that I wish there was some form of mental enema I could take before writing this review. I also wish that I had a small time machine that would allow me to go back in time one hour, and allow me to relive that part of my life, free of Megami Paradise’s cruel torture. That, or the notion that I could perhaps force its creators to eat vomit, since that’s about how bad this excuse for an anime was. *cough* That being said, I’ll attempt to explain why the "plot" of Megami Paradise was as ridiculous as it was. First of all, there are several words that I think would sum up the entirety of Megami Paradise: panty shots, fanboy, 14 year old male wet dream, girls that wear almost nothing, and "oh god, please shove ham sandwiches up my nose and stab my eyes out with a fork so I can escape the horror!". I’m sure that you, the reader, want more than that, so here goes. Megami Paradise takes place in a fantasy world, full of goddesses. That’s right folks, no males of any kind. Also, no females that aren’t in the age range of approximately 14-25. In typical "wow, this is so realistic and fitting for real life" style, all the females enjoy wearing nothing more than a leotard or bikini, with high heels, which of course makes a great deal of sense considering they are still worn during fighting scenes, running, etc. The ecchi is definitely flaunted for no reason, such as a scene where one of the girls is fighting, and the sword rips the front of her shirt open, exposing breasts. Talk about unnecessary with a capital U. Then we have this device called the Astrostar that is never explained, except we do know that it is shaped like a ball. This thing somehow protects against evil, and of course, evil goddesses come to steal it and banish it to a different dimension, using one of the main characters as a sacrifice! Now, I admittedly have never seen an anime with something called the Astrostar, but I can easily say that this OVA takes elements of every other bad fantasy series and shoves it together in one giant panty shot. I keep bringing up the panty shots, but I will point out that it isn’t completely ridiculous ala Kiddy Grade first few episodes, but it still is totally absurd after awhile, seeing gratuitous shots from behind. Anyways, tons of magical girl fights, and almost no substance at all. If Strongbad was watching this, he would have yelled "DELETED" about 95 thousand times over the course of two episodes. AnimationIf Megami Paradise was a tangible object, I’d give it to a "I just ate a ton of chili and OH GOD MY INTESTINES" person on the way to the bathroom for toilet paper. That being said, the animation really wasn’t that bad, so I have to give it some sort of credit. Character designs themselves and backgrounds are utterly generic for fantasy series, but still decent to look at. Especially in the beginning, I was reminded of El Hazard, with the pastel hair colors (complete with trademark bangs on every single person), and beautiful flowers and castles. Unfortunately, the sheer amount of fanservice really cuts down on the potentially good animation, with camera angles that are done solely to see up the skirts, or just from behind (since pants don’t seem to exist in this world). Special effects were cheesy, simply a glow around objects, or cheesy lightning effects. No CG was used or anything of the sort. All in all, better than average animation, blundered by fanservice galore. SoundAbsolutely generic and non-memorable music in basically every way. It ranged from (fairly decent) harp music in one scene, to bubbly synthy beats for all of the would-be "comedic" parts. Action scenes had generic synthy music as well, which fit something that came from the 80s. There is nothing special about the music, and I can’t see why you’d consider it anything special either. Voice actors were definitely whiny and fitting, except for a few that definitely sounded like men. CharactersThere is absolutely zero depth to any character, unless by depth, you are talking about how far down their cleavage goes. Each character is a stereotype of something: the ditzy brainless heroine, the childish little girl, the manly villain, etc. Each of them plays their parts to the T, with a personality that is shallower than a puddle. Character interaction is always borderline yuri, chalking yet another excessive tally to the blackboard. Absolutely no character development happens (insert another joke about breasts here), and you feel nothing for the characters. I really wish I could come up with more insults about how awful the characters were, but it would require more energy than I want to give for this OVA. OverallYeah, I know... the scores don’t average out to a 2, but I don’t care. After forcing myself to watch this monstrosity (you guys need to appreciate all these rare things I watch to add!), I can’t give it anything higher than a 2. I want to give it a 1, but I feel the somewhat decent animation should bump it up by one point. The rest was a horrible excuse for an OVA, unless you are male and really want to rub one off for an hour (or want to see any fantasy anime ever made). Seriously, don’t waste your time. Carve wooden objects, learn how to basket weave, tip cows, or force feed yourself with nothing but mutton... just do ANYTHING except watch this! 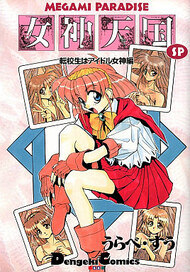 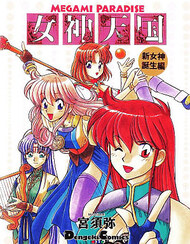