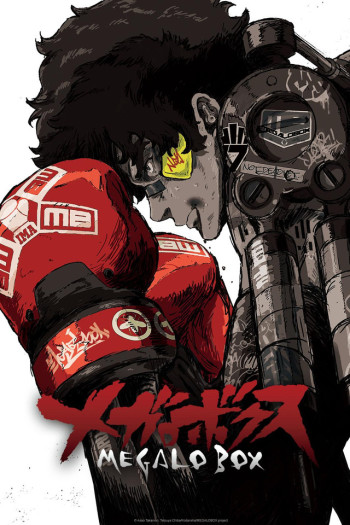 Megalo Box is one of those shows convinced that nobility of spirit can be found anywhere, even in a violent sport played by petty criminals and brutes. The love of something is enough to make it legitimate, and transform the one in love into a noble soul. That’s essentially how every sports anime works, and at its core Megalo Box is just that. It deviates not an iota from the usual tropes, but it does add an interesting desolate background and one or two catchy hip-hop tunes for that urban cool. It is easy to enjoy the show because it relies on a familiar structure and conventional tools to keep the viewer engaged: an upbeat and likeable hero, cliff-hangers, an underdog fighting against the odds, and a whole bunch of passionate people convinced that winning a contest is the most important thing in the world. And because they are convinced, so are we.

Despite some solid direction and adequate animation, however, the world-building sometimes misses a trick. We see shots of a desert wasteland surrounding the city, which is the main location, but beyond such teases there is no attempt to elaborate on this world. How did we get here to such a mean, post-apocalyptic setting where there’s clearly societal hierarchy, ID cards, and some impressive sports tech called “gear”, but seemingly no welfare state to take care of orphans, no decent neighbourhoods, and a criminal underground that operates without any obvious constraints by the judiciary system. There’s so much left unsaid that the hodgepodge of high tech and low-life becomes arbitrary. If Megalo Box’s milieu is convincing, it’s merely because we’ve seen most of it before (Gungrave, Cowboy Bebop, Trigun), and therefore can rely on familiarity to help us ignore inconsistency. Regarding the gear, sheathes of metal worn on the arms and shoulders to enhance performance during duels, the show has a paradoxical message: it’s not about the gear, it’s about the man. But if that’s the case, then there’s an illogic in having them in the plot in the first place. Their function is left ambiguous - they can enhance speed and power, but ultimately depend on how well they sync with the wearer, and they can be foiled with a KO punch that they regularly fail to block. There are no extraordinary stunts to demonstrate the added value of the gear. The only purpose they serve is, again paradoxically, to give “gearless” Joe a handicap that implies he is a superior fighter. After all, he can stand up to the best of them without technological help. But that handicap swiftly loses its novelty, our minds adjust to the implied imbalance, and ultimately the scenes just look like two guys fighting.

And the fights are a secondary source of drama - much of the story in fact takes place outside of the ring, with some pseudo-politics delivered by the corporation in charge of the Megalo Box tournament. What ultimately keeps the show sturdy, despite its rickety world structure, is the classic core of its plot. Underdog hero (this metaphor is taken a bit far with the constant referrals to Joe as a stray dog) and his unlikely pals work together to fight their way to the top of a tournament using a heady mix of talent and passion. Joe is genuinely enjoyable to watch, combining just the right proportions of brashness, arrogance, and integrity. He has a sense of humour and he doesn’t take himself too seriously. But he’s also damn good at what he does and loves his sport. His trainer, Gansaku Nanbu, has some good moments too. Everyone else is cookie-cutter fare, although I found his frienemy relationship with the main antagonist Yuri satisfyingly bitter-sweet. They admire each other, but they ultimately can never be on the same side. More should have been done to develop this beyond the handful of snatched encounters in nondescript city streets.

Truly, for excellence in this genre, watch Hajime no Ippo, which still remains unbested (Major seasons 1-3 come close). Hajime no Ippo’s special spice is to ensure that every time two characters step into the ring, they enter what feels like an immersive fantasy world that is highly engrossing - including stylised action sequences, excellently developed characters, and compelling inter-personal tensions that all can be found within the ring. Megalo Box is entirely about a fantasy world, but it has no idea how to show it off. It possesses a sports anime soul, which it nurtures, but then weighs it down with useless gear. All in all, though, viewers can expect a fun time and a smattering of novelties, which, given the genre, is more than enough.

Megalo Box is a stylish boxing adventure of a seemingly dystopian future. An underdog story at it's core. A simple story with appealing but simple characters with hints of ample but not quite heavy bage in the form of personal history. The setting denies our main character of even citizensship in the country or city that he lives in. This is something that is hinted at being not uncommon in era. While Joe starts out doing shady business to earn money by throwing fights in the series opening; he yearns to fight a proper strong worthy opponent. As one thing leads to another he starts a rivalry with the champion but after losing a fight with him to get his revenge match he has to fight his way up the ranks in a new tournament but to participate he must first gain citizenship.

The animation and sound design and everything else about this show is stylish and a throwback to older rougher animation of the past. Being styled somewhat like a show from the  90's such as the always popular to mention Cowboy Bebop. It is still using modern techniques however but they do a very good job of blending it with the show itself in such a way that practically anyone watching will not notice. The soundtrack is stylish and fits the series well and the original voice acting gets the job done well being not distracting and fitting the cast.

The show does not try to sweep you away with strong dramatic scenes or deep character defining inner monologues. The characters are not exceptionally deep, eloquent or wordy but have clearly defined flaws which sometimes are explained through backstory. They are their own people and they fit the setting. It's characters, they're simple people acting on emotion and even with the backstory and character establishment present they remain simple people who you can quite easily emphasize with.

This show did what it set out to do and was stylish and involving with the ending being what you'd hope for in this show. The shows episodes continuely further the plots by varying increments. This show doesn't feel like it's every completely wasting an episode and what happens in an episode has at least some impact further along the line. Simply saying ''this was a good anime.'' will suffice for me. I don't care much about the shows drawbacks as they were few and it's strength lays within it's style and execution more than in revolutionary plottwists or evolved story telling. It's a simple show that's just made well and you go in with expectations about what you will get and don't ever should feel betrayed by this show I think. It's overall just ''a good anime''

Is it the best thing ever? Who cares, it's good. It's story might be too simple for those seeking depth, deep character drama and engaging dialogue, if you're looking for that. But from start to finish this show just doesn't betray the expectations even from it's promotion art you get plenty of a indication of what this show will be like.

This show regardless is pretty much a classic in becoming despite being actually very simple at it's core. It's well build up but it's plot isn't massively complex but because of that it will appeal to those who crave darker settings without the need for a web of complex character relationships.

This Anime reminds me of Cowboy Bebop, the style, music and characters. The story takes place in a dystopia where citizen ID is needed for most things. Megalo Box is a special kind of box that exists in this universe. Basically, it is boxing but the fighters may have a gear, that increases the overall efficency of the boxer. About the main protagonist, Junk Dog (Joe), gets to meet the viewer in some sort of illegal, underground place where Megalo Boxing is a favourite gamble game and from the start feel that Junk Dog is special. I feel like the idea of this is not that original but the story is cooperating well with the progress of their lifes and the plot. I find the story rather slow and sudden, some of the plot twists can be foreseen and that seems kinda annoying sometimes. As i said before, the Anime reminds me of Cowboy Bebop, specifically the animation style. (Also Kill la Kill was kinda familiar too imo) The 3D graphics (Mostly backgrounds) were really well combined with the rest, didn't seem off and was breathtaking at some points. Music was very fitting and sounded really nicely... the most i loved about it was how it could change the happenings of particular scenes and could get you into the action. Of course the characters weren't bad too and i have to say that character designers have done a really good job in this case, every single character was unique and had different but somehow similar personalities.

Overall, i really recommend watching this great piece of work :) 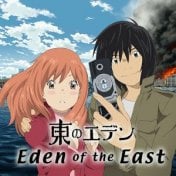 Its like Samuirai Champloo and Cowboy beop had a baby.

The best original sound track and animation style I have seen in a while. While the story and character development lack in depth and substance, the rest of the anime more than makes up for it. You aren't going to be morally, philosophically, or intellectually challenged by this animes plot line or twists in the story, but you're also not going hate it either. Most anime out there don't this anyways, Its not bad in that regard I would say its a little better than average, but it definately isn't this animes strongsuit.

However this doesn't mean you can skip this anime just because it is lacking in that aspect. You just can't miss this ride of a perfectly blended animation and soundtrack. This is going to for sure be a "must watch anime" for all times.