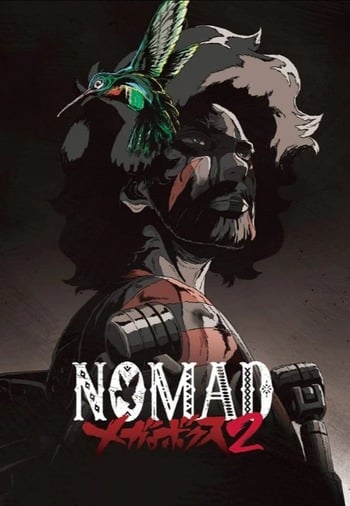 The Hummingbird and the Nomad

*spoiler-lite review. Spoilers of Season 1 will be given. There is no getting around it.*

Wherever you may wander, and whatever may happen, all roads lead back home. But sometimes, you need a guide to lead you there. Life will provide this guide to you in some form. For some, it takes the form of whatever you have left after the journey of life; whatever you have to go back to.

While Megalo Box season one was the perfect example of a hero's journey, Megalo Box: Nomad is the embodiment of the journey back home after a hero has gotten lost.

After the death of a loved one, it's easy to place blame on the nearest thing, especially if that thing is yourself. It can be part of the grieving process, but it can also be destructive. After Joe and team Nowhere lose their coach to cancer, Joe leaves town with a heaping helping of guilt, searching for a reason to live on the streets and drowning himself in the sport of Megalo Boxing, painkillers, and self-pity, while those he left behind find the will to move on, some taking on more responsibility than they should, while the world moves on.

On the way, Joe comes across a former boxer named Chief, who is appropriately the chief of a small camp of immagrants, which kickstarts the continuation of his character arc, and the rest of the anime. Chief is an amazing character to be introduced and he is a great representation about what's different about this season from last season.

Megalo Box season one was a tremendous example of an anime about following your dreams and being determined to live for your passions despite the threat of death, in a dangerous and unforgiving world. But this season is much more somber and realistic. Instead of focusing on the more hip-hop type of culture of Megalo Box's main city, the focus switches to latin american culture, featuring a more hispanic cast in characters like Chief, Mac, and their families, and it also explores their culture and their individual stories in depth, which perfectly compliment Joe's own journey.

I can't praise the characters enough in this season, the ones from last season get more development and gain tremendous depth, not limited to Joe. Sachio goes through a lot of growth as well, and the newly introduced Mac's story is one of the most tragic and compelling I've ever seen. But it never strays from this main theme, every main character, no matter who they are in this show, is a former hero turned Nomad, who needs to be guided home in some fashion, a point the story's poem about the hummingbird puts into perspective at every turn.

The nomad is stopped on his journey by a hummingbird, and is offered to listen to the hummingbird's song. The nomad says he's lost everything, and has no reason to live, but with each meeting, the hummingbird reminds the nomad of what he has left, hoping to make him realize all the reasons he has to keep living and not lose what he still has.

What you end up with is a very poingnant message about "what you have left" after loss and tragedy, and what to do with that, and all the steps it takes to realize that. It's absolutely beautiful, and it's a unique journey that most shows don't follow.

This season takes what it had before and turns it all on its head. There is no sequelitis here, everything is used in a completely new fashion and no ground is retread. This is exactly what a sequel should be, especially if a story has already "concluded". There is nothing "cash grab" about this season, and that's one of the best things you can really say about a second season in my opinion. It's incredibly satisfying when all possible themes for a show are explored in different seasons and they both end on fitting conclusions.

The music is really what makes this season and ties everything together. The chillhop music is still there, but combined with a soundtrack more appropriate for the hispanic cultural focus, acoustic guitars and spanish lyrics, ect. This season has gorgeous music and I want it injected into my veins NOW. It's just so good, and it wouldn't be the same without it. That's the sign of a good OST, that you can't imagine the show without it. It completes the atmosphere.

The animation is of course great, TMS knocking it out of the park as they did with season one, and the artstyle never strays from that stylistic classic feeling which made some fans drawn to it, and pushed other more "contemporary" anime fans away, unfortunately. But I respect the commitment to the retro styled soft lines and colors. It just feels so warm and comforting visually.

It also fits the story very well. This anime's story and characters wouldn't fit well with a "cleaner" artstyle. The roughness and fuzziness adds a lot to the feel of the whole thing, and completes it. The backgrounds are very "dirty" feeling, which is awesome.

There's not many comparisons I can make to the feeling of watching this anime, except "bittersweet" and "real" would well describe it.

I don't like just giving out 10's, unless I can't find a single flaw in an anime, and it does everything it set out to do perfectly. Well, no matter how hard I try, I just can't find a single reason not to give this brilliant, touching anime a 10/10. Seriously, watch it, and if you haven't watched season one, watch that too. The two seasons complete each other amazingly.

**WATCH THE FIRST ONE BEFORE CONTINUING WITH THE SEQUEL FOLKS, I MEAN IT. ALSO AVOID LOOKING AT THIS REVIEW IF U HAVENT SEEN THE SEQUEL YET**

When I heard Megalobox was getting a sequel I was so so looking forward to it man! Watching the sequel at first made me heartbroken to see that our main character, Joe was abusing himself with drugs and experiencing guilt in terms of Nanbu dying as well as leaving the kids (now in their pre teens I’m guessing) of “Team Nowhere” behind. That all changed for the better when he met his opponent Chief who literally was a likeable character in the series. Joe and Chiefs bromance was literally great, I just wish it wasn’t so damn short :’(

I even liked the ending man, like ngl, it was the most satisfying ending I’ve ever watched in a long while in anime! Mac’s and Joes fight really ended on a good note with no seriousness involved, it just ended the right way! I was even glad that Sachio and Joe rekindled their relationship because I was worried they weren’t going to get on at all!

Such a really good sequel like the music was perfect, especially in Spanish where it’s hardly used in anime at all. Story was moving and characters whether good, bad, new or old, made everything worth it!

ill keep it quick and simple with no spoilers.

amazing watch. 9/10 each episode keeps you on the edge of your seat. and each episode just gets more heart warming especially the end.

id say theres actually no antagonist of the story, (besides the short guy, and the glasses guy. but they have minor rolls to just simply set up the fights and get the hype going)

tho i wish there would be a s3 because i want to see more, but i feel like s2 would be a good place for it to end

This anime has to be one of the most compelling and bittersweet one's that I have watched thus far. From the storyline, to the characters, soundtrack & animation. They all flow together seamlessly to create an absolute masterpiece. I enjoyed both this season as well as the first. And watched it all the way through within one day.

The development of both the characters, as well as the storyline is phenomenal and really leaves the viewer interested. I shed a few tears throughout the 2nd season, and really felt drawn to the concept the writers created. I could not ask for a better second season. It touched on realistic struggles with self, addiction and pain; that many could perhaps relate to in their real lives. However, it also touched on themes of home, family and the like; meeting those upon your path that may not be blood-related, but instead, are able to inspire and move you in ways that make your dreams come true.

I would definitely recommend this anime to anyone.

This show is freaking underrated. Story was interesting, especially in season 2. Animation gives the same vibe as Cowboy Bebop and it was so nice. Sounds? oh god. I loved these backround musics and sounds when they punch themselves in that rings. And characters? They were so interesting too and they was so real for me at least. One of the shorter animes i really enjoyed it. It has good vibe at all and i highly recommend it.