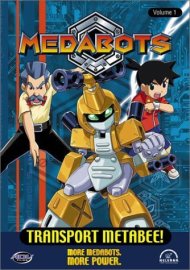 All young Ikki wants is to have his very own Medabot, but his parents insist that he purchase the machine with his own hard-earned money. Though he can't afford a top-of-the-line model, Ikki finds, by chance, a special medal in the river; with it, any Medabot will come to life and accept the commands of its owner. After a fellow classmate is bullied at school, Ikki rushes to buy an inferior model of Medabot and places his medal inside of it. While his new companion - which he dubs Metabee - is functional, there's one important problem: Metabee has a serious attitude problem and refuses to acknowledge Ikki's commands. Together, Ikki and Metabee will duel opponents such as the Rubberobo gang and local bullies while they prepare for an upcoming Robattle Tournament - but their worst opponents are each other! Will Ikki and Metabee stop arguing long enough to climb to the top?

Anime based on some product are made solely to advertise it and start an addiction to its possible consumers (usually nerdy kids with loaded parents). As such, most game –based anime are quite lame, with childish scenario and carton characters being just an excuse to shovel us flashy techniques or strategies of the soon-to-follow game. Although this is sort of a scam, at least Medarot has a few jokes up its sleeve and becomes bearable at times. But in all, it is nothing more than a cheap trick to promote a videogame and miniature toy robots. ART SECTION: 3/10 [The amoeba syndrome strikes again!] Awfuly minimalistic and 2D sketches are filling the screen. Did the animators even try to draw while they were sober? Did they even try at all? It is terrible if you freeze the picture and observe the unexisting proportions, the ridiculous explotions, the invisible shadowing and the really low-frame animation. Some action scenes during key-episodes get a lot more attention but in all, it is quite lame. Some may find the style appropriate with the satirical feel of the series but that does not mean the artwork is good. It is cheap as heck. SOUND SECTION: 5/10 [Round One. Fight!] The music themes were beaty enough to be considered bearable. Voice acting was relaxed but quite funny because of the nature of the series. Nothing great as a whole; they just cover the basics of what a good show could have beed all about. STORY SECTION: 4/10 [Got to catch them all… The medallions, that is.] In a world were …- 8 year olds are free to buy war machines from hardwear stores - equip them with deadly weapons - have them dual each other for fun- while wrecking entire neighbourhoods- without their parents minding at all… a hapless boy gets one and plans to… yes, you guessed it … become the best medarot player in the world. The story ain’t that much different from Pokemon. Get a robot, insert a medallion, customize its weapons and fight other kids with robots, so the winner can get points to use them for championships and extra shopping. Of course, like in Pokemon, the series is not only about dueling; it blends Coming-of-age stories, personal dramas, some social issues … and your typical secret organization that plans to rule the world by using huge versions of the robots. Although most situations play out quite humorous and rather interesting for the younger audience, they are overall pathetic and weak as a story. At some points it packs really wowing revelations concerning the origin of the robots and of the bad guys that makes it seem not-completely-bull but most of it is silly comedy and easy going missions. CHARACTER SECTION: 5/10 [The circus came to town.] The characters look awfuly simplistic because of the low quality of the graphics, yet they are very funny-looking because of the slapstick humor. They have really jerky motions yet their extreme facial grimaces make up for it. As personalities they are simple; just a quirk to separate them from cardboards. The dorky male lead, the edgy robot partner, the serious girl reporter, the butchy female rival, the mysterious thief, the lone wolf robot, the comic relief underlings… There is a huge variety of stereotypes and most seem to be parodies of various other shows which makes them even funier and easier to be memorable. Especially that referie who for some reason appears out of the blue all the time. Truth is they don’t really develop beyond trusting more each other and using bigger weapons later on, so they never stand out as anything else other than funny parodies of stereotypes. ENJOYMENT SECTION: 5/10 [It was funny at many points; I admit that.] Most stand-alone stories had a good moral message, behind some wacky sense of humor. And some battles were really about strategy and not plain power-ups and raw power to determine the winner. That made it somewhat bearable to wfollow for awhile but it is eventually tiresome for teenagers and above and lacks cool visuals to keep even the toddlers. VALUE SECTION: 2/10 [Value your money and stay away from this example of cheap anime.] It is the funniest amongst game-advertising series but there are tons of similar anime out there wih far more to offer other than blunt parodies and cheap production values. Digimon is a much similar yet better in overall series, Gintama has a better sense of parody, while Dennou Coil takes the whole concept to new heights.

Medabots is an excellent anime that produces more than what most people would expect when looking at it. The characters are amazing and hilarious, with humor that is much different than what I normally see in anime. Medabots was able to grow its characters perfectly along with the story, making a perfect set up for later in the series when the plot picks up. The only two negatives I have for this series is the animation, which seems somewhat sub-par, and the ending was atrocious, definitely not how I thought it should have ended. But everything else makes up for it, in my eyes. The characters, and the story until the end were very fulfilling. This will always be one of my favorite animes.

ok so this will be my first reveiw ever , i feel that medabots would be a good place to start as it dosent have meny reveiws posted to its page. i will have to give some warnings though as i did love this series because i watched it as a kid and it was my favorite anime from my child hood , also given that i watched it as a kid i did watch the english dub as most people would probably discredit my reveiw on that point alone. but at least hear me out on this one STORYthe story honestly is not much but it did provide some fairly entertaining plot twists so i can say it was better than average even if almost every arc boiled down to the rubber robo gang being behind it all  , how ever the concept is something id like to praise and discredit at the same time , little kids being able to buy dangerous weaponry to add to their little war machines BUT all danger and unrealisticness aside , I REALLY WANTED A MEDABOT as a kid i loved the conept and even as an adult (all be it a childish "adult") i still wanted one , a robot best friend that you could go fight your friends robots best friends sounded so incredably stupid YET it tickled my sence of adventure , the ending on the other hand was so cliche it made me mad , it felt like the writers just didnt care any more witch sucks cause this could have been a great show if a little more care went into it , a final good point to the series is it had an international appeal as in the final arc the main opponent was from kenya YES KENYAANIMATION HOLY HELL the animation was bad the charcter designs were so simple it hurt, hardly any detail went into the humans at all , and the fights wern't much better except for a select few, but besides those selct few the animation was consistantly bad through out , how ever that being said the medabots them self i found were designed really well and alot of thought clearly went into them as this is because its the main selling point of the show is the robots , and yes as a kid i did buy a few medabot toys witch i loved VOICE ACTINGnow heres where it gets controversial like i said before i watched the english dub of this anime witch is something i do any ways but weather its subed or dubed makes no difference to me , now normaly with kids shows i will watch it subed because of the bad dubbing 4 kids and other companys have done in the past , this one is special the dub isent perfectly acted but in my opnion its perfectly cast all the voice fit and fit well , the acting may not have been perfect but during the comedy moments the lines were still funny and since its directed towards kids i can forgive them for makeing the emotional moments a little les emotional because of it as makeing a kid sad is never cool even if it is in the name of art , and i just can't see metabee voice by ny one else other than JOSEPH MOTIKi . who dispite the rest of the cast being acted sub par metabee was acted really well its also impressive that the only  other voice credit i found he had was rockey canyon from the rescue heros, the dubs also canadian so maybe candians are just talented (speaking as a canadian )MUSIC the music fo the dub wasent bad but it wasent great , the opening was changed to appeal to english speaking kids and i honestly love the opening personaly because of my childy hood memories but alas it was sub par , the rest of the music how ever was a little better and did its job for the scenes they were presented in CHARCTERS this is the best part of the show metabee and ikki have a great relation ship that was remanisant of how pkiachu and ash started out, ofcorse they became best friends , metabee is a foul mouthed cocky robot who clearly has a black guys voice, hes some times sarcastic and has some really great lines like " AND thats when i found out i wasent in the bath tub i was in the toilet " , even if it is childs humor i found it funny. ikki is cliche in every way and i didn't like him much but his relationship with metabee i did like . there is also an aspireing reporter , a rouge medabot who fights despite not haveing a master and being a little more human than robot , a group of self procliamed thugs whos leader is a tuff girl on the out side but love ballet on the inside , and tuxedo mask I MEAN PHANTOM RENAGADE/space medafighter x who he can jump from cool to blubering idot at the flip of a switch and he also has a not so secret, secret identity , a last worthy mention is that this is the first anime to have A CANADIAN CHARCTER yes this anime actualy has a charcter who comes from the great white north , this kids is somehing you do not see every day , even if he was just a carcter that was there for 1 episode and was referenced in a later episode he still stood out because of how rare it is to see a charcter from canada even if he was just a sterotype  FINAL 5.5/10 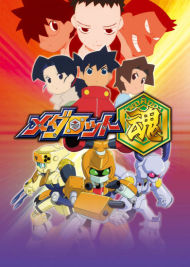 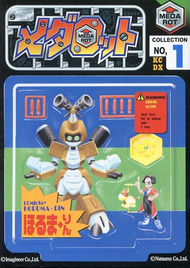 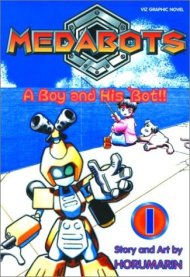