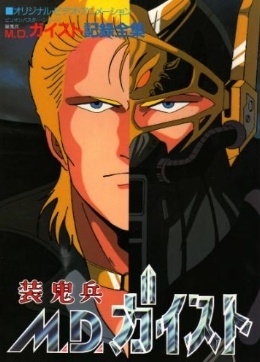 If you're looking for manga similar to MD Geist II: Death Force, you might like these titles.

Five years have passed since the tragic incident ended the peaceful life on Regul Aire once and for all. The Beast have reached the floating island and are threatening the last survivors. Tiat, Collon, Pannibal, and Lakhesh have become fairy soldiers and are continuing the role of their predecessors, fighting for the safety of Regul Aire. And just like all the other fairy soldiers of the warehouse, they need a guardian of the military, and so on one fateful day, Tiat encounters Feodor Jessman, a young imp and fourth-grade military officer. At the first glance he appears like a typical honor student, however, it's not for long until he reveals his true colors.

Set before the events of Kichikujima, Alice is a model who's been hired for a photoshoot on the isolated and idyllic Kichiku Island. But soon into the shoot, she and the crew encounter strange children wearing animal heads as masks and head into town to investigate. The bloodbath starts when the group meets the now 10-year-old Mari and her brothers. And unfortunately for Alice, the pig mask-wearing Kaoru believes that she's their missing mother, and will stop at nothing to keep her for his own.

In the year 2030, "The Belian Island Incident" happened where a highly radioactive alien substance was accidentally exposed to the atmosphere, causing half the world's population to be killed or mutated into zombie-like creatures called ELID and the land becoming contaminated and uninhabitable. In response to the world suffering a shortage of Manpower, highly advanced androids with superior strength and advanced AI capable of expressing emotions called A-Dolls were created. When World War 3 broke out in 2045 to 2051 over uncontaminated land and resources, Private Military Companies used A-Dolls with the ability to fight called T-Dolls in the war, which made them rich, becoming the de facto police and military of many nations after the war ended. However, in 2061, T-Dolls of the world's largest PMC, Sangvis Ferri, suddenly rebelled, killed their human masters and attack nearby human settlements. In response, Grifon & Kryuger PMC and their T-Dolls were hired to stop and contain the Sangvis Ferri Forces.