Alt title: My Life as McDull 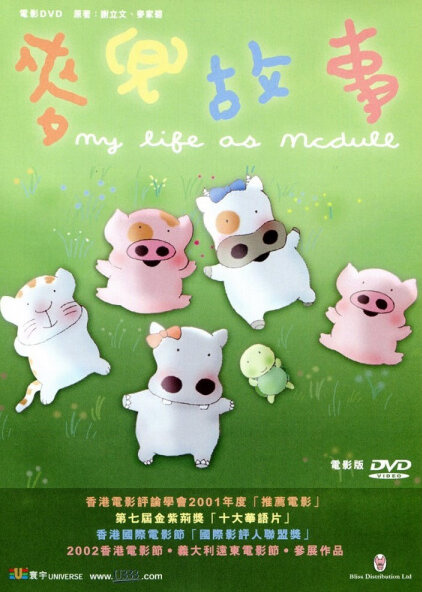 3 Little Pigs and the Magic Lamp

Three little pigs, Melanie, Danny, and Bobby, are best friends and longing for adventure. One day they find a treasure map which could lead them to the mysterious magic lamp unlocking the mystery and secrets of the forest. Along the way in their quest the pigs encounter the original owners of the treasure map, the evil wolves who want it back. Everyone knows that whoever holds the magic lamp can rule the forest so it is a race for the pigs to use their courage, brains and heart to find the lamp and save their school in this adventure of good versus evil.

The story begins as archaeologists discover a crudely-made artifact while doing an archaeological study before the entire area was to be flooded following the construction of the Three Gorges Dam. The archaeologists identify it as being made by Mak-zi (also known as "McFat"), an ancient Chinese philosopher who had invented many things, but were arguably ahead of its time - for example, a myriad of electronic devices before the discovery of electricity. However, the crudeness of the artifact has led to the artifact being rejected for every museum in China and abroad, and thus, unwilling to destroy it, the artifact was set on a barge, continuously moving along the Yangtze River. The story continues on to Mak-zi's descendant 18 generations later, McDull (Kwok Kwan Yin), a kindergartener living in Hong Kong.

Springfield Kindergarten is desperately in need of money - The principal is behind on the rent, and the electricity is getting cut off. After a fundraising dinner ends in spectacular failure, the music-loving principal decides to form a student choir as last resort. With the help of a shady talent manager named Big M, the Springfield Kindergarten Choir becomes a huge success, and little McDull discovers that a little thickness really can make a great voice.

McDull: Wo He Wo Mama

McDull, Hong Kong’s most beloved cartoon pig, recalls his childhood days as he watched his mother, the sensible Mrs. Mak make ends meet by working countless jobs, including appearing as a superheroine in a traveling roadshow, where she dispenses handy life hacks. Although it seems that he may not be destined for great things in life McDull never gives up trying.