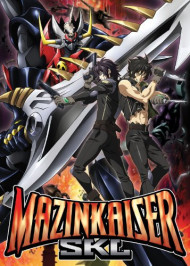 Above Japan waits Remuria, a colossal floating island leftover from the last world war. It's a lawless wasteland of robot super-weapons from a forgotten age of military might. Receiving word that the unstable island s reactors might explode and vaporize Japan at any time, the Japanese government awakens the most destructive force ever devised MazinKaiser!

From Secret Santa Gifting, to a Review I was not much into this. Now I am indeed into mech anime, and I like aspects of this short movie, but its really rather all over the place. The romance is really the only glue that holds itself together, the rest is just a mess. There were things I didnt understand, or why something works. Lot of techno-magic-hand wavium going on. For me, it was a lot of flashy, loud characters, with explosions. Unfortunately I've seen better shows with that theme.

The epitome of all that is wrong with Mecha shows, this one made errors beyond that even... Story: OK, so there was a story here, but they glossed it over the whole way, half the time I wasn't really sure what I was watching except a poorly executed romance of the three kindoms clone, complete with both science and magic. They never really explain what's going on very well and as a result you feel next to nothing for or against any of the characters. Animation: At the very start I was reminded of 80's style animation, not the good kind. Choppy, washed out with little to no detail what so ever. Really nothing more to say here, it just wasn't upto standards of it's own generation or even older ones. Sounds: I couldn't find any faults with this really, it never really holds much interest in me either. I did enjoy some of the songs, and the sounds matched the actions well enough without removing me from the, well, I'd say immersion but really there wasn't much of it to begin with. Characters: The real star of the show had to be the girl, she had the most fleshed out personality IMO. The rest were there to fight with one another, that's pretty much all they did, soon as the fighting was over, the boys left and didn't have much to say/do except fighting. Overall: Sum didn't equal the parts, for  two reasons, 1) I dislike Mecha shows to start with ("but then why watch and review it?", was bored), 2) The show sucked. Putting aside my dislike for a specific genre is easy, I've seen quite a few mecha shows and enjoyed them quite a lot. Granted, that list is very short but it does proove, at least to me, that I'm able to enjoy mecha shows done "right". That being subjective and in the realm of opinion... Anyway, I personally think that most true mecha fans are gonna at least enjoy it on a purely basic level. Watch a bunch of mechs destroy each other... Sure, why not? However, those looking for a little more substance for their entertainment aren't going to find it here. In the end it is only a scant hour and 20+ minutes, worse things to waste your time on.