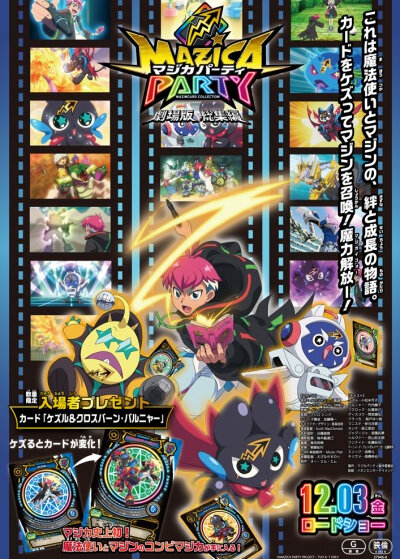 Ruko Kominato, who receives a WIXOSS deck from her brother, discovers that her LRIG, which she names Tama, can speak. She soon learns that she has been chosen as a 'Selector', girls who must battle against other Selectors. Should they be victorious in battle, they will be able to have any wish granted, but should they lose three times to other Selectors, they will lose that chance and lose all memory of the game. As she and various other Selectors battle it out for the sake of their wish, Ruko finds herself drawn into the dark sinister world of WIXOSS, discovering that win or lose, there is always a cost.

"Chaos" is a trading card game that is very popular at Manami's school. Trying to learn more about it herself, she purchases a beginner's set, only to discover that it contains "Sahgan, The Mighty Sorcerer," the rarest card in the game. Now every other player is out to win the card from her. But Sahgan himself begins to visit Manami in her dreams, offering her advice on how to win.

It was an age where everything was decided by the power of the cards bestowed upon humans by the Goddess—A blue-collar worker, Takatsuki Akito became a Card Master, one of those who contend for the hegemony of the world, and aims to collect the powerful Battle Cards scattered worldwide. He then bets his entire life on the “heavy labor draw”—after spending a large number of gacha tickets on the ultimate test of luck, Akito manages to draw a card. “Yahoo, Master! I’m Carol, the ultimate finance-specialized secretary of secretaries!” The battle fantasy of a certain card maniac and his avaricious secretary who rattles the world’s elites begins here!

Summer 2010. A strange researcher from a suburban city developed a total-immersion virtual reality game that would sweep the world. The game is called "Brave Duel," a motion-sensing simulation card game with team battles. This is a story of a girl whose fate leads her to meet many rivals, compete with them and grow from the experience. Their summer is about to start!

Sequel to Mahou Shoujo Lyrical Nanoha Innocent with Subaru and Teana as the main characters.

The duel between Yuuya and Akaba.

"Greatful Magic" a widely popular card game in the world. In Japan is "Greatful Magic" youngest champion is Narashi Hiro. One day when he was challenged by a runner up, he met with Nikke who promised he would tell him the location of his missing father....