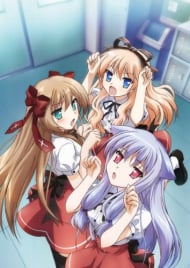 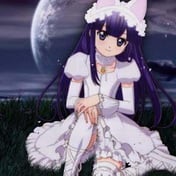 Mayoi Neko Overrun! could have been a great anime. Mayoi Neko Overrun! could have been the breakout series for Spring 2010. If only they had picked a direction.This anime doesn't know what it wants to be. Unlike the manga, it's not pure ecchi/harem. Unlike the light novels upon which both the anime and manga are based, it's not even a good romance. Each episode of this anime feels like it belongs in a different series. The series starts off as a school life comedy, introducing many interesting characters. The first three episodes set the scene for a story that never receives any flesh: Takumi and Fumino are orphans who grew up in the same orphanage, and even after Takumi is adopted by a globetrotting hottie named Otome, the two remain close friends. At home, Otome runs a western-style pastry shop named "Stray Cats." While Otome is out of town, Takumi and Fumino run the shop together. Fumino is a very steriotypical Tsundere, always saying the exact opposite of what she means, and often telling people to, "DIE TWICE!" The romance between Takumi and Fumino is highlighted early on, as after a night of semi-cuddling through a storm, Fumino confesses her love to Takumi.Otome's latest trip lead to her bringing home a mysterious girl with no past named Nozomi. Nozomi has many cat like features, up to and including some very convincing neko mimi; she really is a stray cat. Even when she tries to leave her new home, Takumi explains that everyone at Stray Cats is an orphan, that she is welcome to stay. And then the story just ... dies. Fumino's confession goes unmentioned and isn't even acknowleged in Takumi's thoughts. Nozomi's past is rarely brought to the forefront. Episode 4 finds the characters at a hotspring with absolutely no explanation how or why; the main male characters are then abandoned in the woods after a ridiculous turn of events. Episode 5 finds the characters shooting a video for a club (which was barely mentioned before now) and the events are completely outside the "school life" realm. Episode six breaks completely away from all reason and is suddenly a mecha parody. The episodes have almost ZERO continuity, almost ZERO story, and are frustrating to watch. Mayoi Neko is beautifully, seamlessly animated; that's the only compliment I can give this show. The music is upbeat, but annoying. The characters have no depth; the ladies are just eye candy, the boys are just punchlines. If you want a harem/school-life/comedy/romance/drama, go watch Rosario to Vampire. They did perfectly what episodes 1-3 tried to set the scene for. Don't waste your time on Mayoi Neko Overrun unless you're looking for nothing but laughs, and you're able to laugh at some pretty base stuff. Overall, this gets a 4/10 from me, and I will not complete the series.

I actually really liked the idea of the MC being the only person able to understand his childhood friend who has developed abnomal behaviors as a result of th MC trying to help her throgh a hard time when they were younger. I think if the anime had focussed more on that relatioship it could have been an amazing series. The comdedy was a lot of disjointed gags, The table tennis scene from episode 4 is one of the funniest scenes of any anime i've watched ( and i've watched a lot). I skipped the power ranger episode because I dislike mecha for the most part. The op and ed were okay and the songs the char sung in the early parts were so so, however the songs durring the school festival arc were quit funny and I really enjoyed them. 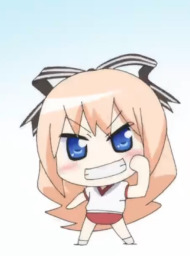 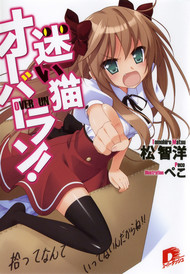 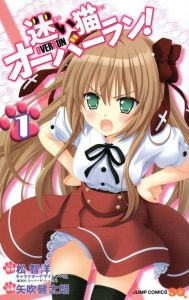