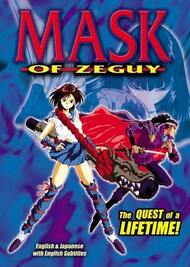 803 users are tracking this. Log in to see stats.

Story: Let's say I didn't read the synopsis, or the back of the cover of the VHS box. Lets say I went in knowing that there was a mask of a guy called Ze-Guy, or The Guy, and judging by the front cover or poster image of this... thing, it's about a girl, a clearly evil hot chick in the background who pulls the strings and that is actually all I registered at first. Nothing else seemed important. Actual plots, it's about the Mask of Ze-Guy. And... it does stuff. Combined with the Heavenly Gates or "The Gates of Wind", which is a giant ass Shinto gate in the sky, it grants one immortal, supernatural cosmic godly powers. Why it does that? How? Why a gate? I have not a clue, because for shit like this, plot is not only shit but doesn't make me give shits about what it's about or why on earth that school girl didn't see how clearly evil that handsome looking man was. Seriously, he looked so evil that he made his cyborg werewolves look evil. It's kinda hard to imagine the cyborg werewolves looking not evil because they're clearly evil and bent on kidnapping high school girls. It's kinda nonsensical and like a good number of 80s/90s OVA I've watched, goes into compelte buttfuck mindshit insanity nonsensical plot dumpings in the final quarter, 4th down, 9th inning and the ending, while not as fucked up as most, is fucking stupid. But you should suspect that, because this relies a lot on deus ex machina, plot-mandatory plot armor, WTF is this shit, the fuck is that and my favorite, the facepalm of "I don't even know what the fuck is happening". My point is, there were cyborg werewolves firing arrows on choppers. Motorcycle choppers. But Apache Choppers would have been fucking awesome. Seriously, sand bleeding cyborg werewolves on choppers. Best shit in the OVA. Animation: Actually decent for something from the 90s. Imagine I'm grading it as if I'm in the 90s but judgemental with the mind of a guy who likes his boobs shiny, the butts glorious and gave 10s to shit like that OVA with the doggy girl with the tits bigger than watermelons with more milk than Seikon no Qwaser, a show about milking magical breast milk by sucking it out forcefully from unwilling high school girls. Oh, and 5 is average. All things considering. Evil gal Himiko (Close enough) should have been hotter. Like Apocalypse (Badass) Zero main villain hot. Sound: Music is good, but could have been better but the English dub is predictably the only way to watch a 80s/90s OVA. It's so bad it's terrible, but hearing the name Ze-Guy, so worth it. The sheer lack of emotion, the collective shits ungiven, bored VAs, phoned in, an annoying main, a main villain who tries to be evil and it all adds up to an English Dub that respects the 80s/90s era of shitty dubs. But seriously, the dub is terrible. And you should watch it dubbed. Characters: I have no business talking about the characters. But Toshiro is a scrotum wrecking flex nuts badass. Overall: I've seen worse, but I've seen much better. Nonsensical plot that explains jack shit, 4 fucking minutes devoted to a fucking recap where 2 minutes was the exact same fucking ass shit in the first fucking episode, rampant deus ex machina shit, a shitty dub, I don't know why the girls fought, that fat cat was a total plus and even the teacher wasn't giving a shit. "Settle down kids, there is still a week of school left". Once more, no shits were given by anybody, them nor I. Watch MD Geist instead, that's some badass shit right there.