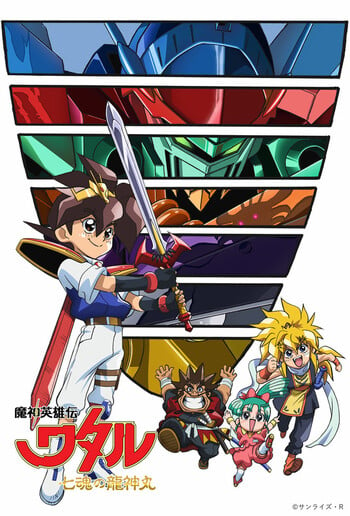 If you're looking for anime similar to Mashin Eiyuuden Wataru: Nana Tamashii no Ryuujinmaru, you might like these titles.

Yohko Asagiri is in love but is afraid to confess her feelings, so she writes a song to express her feelings. Much to her dismay, the love song she wrote acted as a bridge connecting the world in which she lived in to that of Earth's alternate world called "Ashanti." There, the ruler of that world wants her song so that he could use it to open a doorway to Yohko's world and conquer it with his armies. Using the artifacts left behind by the legendary warrior Leda who prophesized her arrival, Yohko and her newfound friends must stop the tyrant's ambition and return both worlds to their proper place and balance.

An Earth girl named Maze suddenly finds herself and her house in a strange and magical forest, with no memory of how she got there (or much else for that matter). When she answers a knock at her door, she finds that she saved a princess named Mill when her house landed on Mill's pursuers. As they set out upon their journey, they are attacked by evil demi-humans and demi-armors - but all is not lost! It turns out that Maze has some kind of mystical powers, and Mill can summon a powerful demi-armor of her own. While Maze's powers are strong during the day, she has little control over them. Once night falls however, Maze transforms into a man; this version of Maze has even stronger powers and seems to have complete control over them. As they make more friends during their journey, it seems that everyone wants to get intimate with the female Maze, and the male Maze wants to get intimate with every female!

It is 2911 and the solar system is made up of of 50 planets. I.C Blues, a gambler, makes a bet with the boss of a criminal syndicate known as Bloody God that it is possible to navigate the whole solar system in one year. Helping out Blues is J9-III, made up of Rock, Beat, and Birdy. To clear any obstcles, they have the transforming train-robot Sasuraiger. But the Bloody Syndicate will do anything to ensure the Blues loses the bet.