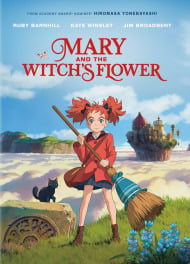 An adaptation of "The Little Broomstick" by Mary Stewart

Watched this movie yesterday in it's premier date in Japan. While it definitely kept up to par with the high quality Ghibli animation and story standards, I feel like it somewhat lacked the originality that Miyazaki's movies normally have.  While I wouldn't go as far as to saying I was disappointed (since I was being entertained from beggining to end), I would say not to expect something of the levels of Spirited Away or Princess Mononoke.

The opening scene was fantastic to watch, too bad Mary's adventure wasn't as wonderful as the first scene. She starts off as a bored, lonely kid who appears to have depression. She has no friends, no parents at the moment, no games, no T.V., nothing to entertain her so she offers to help out around the house instead but she messes everything up. Are these people poor or something? Why doesn't Mary have games or toys to play with?The characters seem pretty inconsistent and I'll tell you why here. Mary is a petulant and dishonest character. She despises Peter and shows no respect to him after he mocked her red hair. I understand that she is a young girl who is desperate to have friends and when she found herself in conflict with a boy around her age who isn't very nice to her, she lashes out at him, but I still think she could've been written to be a little more nicer. Also, she told Tib she would feed him milk. If I'm correct, milk isn't good for cats. Since Mary is naive, maybe she doesn't know how to take care of one.She even lies about how great her day is when she gets home and then has to go save Peter. I feel that this is filler, maybe there could've been another reason for why she had to go back to college or they could've just shortened the film. But due to the film's fast pace, the film does feel shorter.Mary's relationship with Peter was pretty shallow. How did Mary start off hating Peter and holding a grudge against him, then the minute she hears he's in trouble, she starts caring for him as a friend? This sort of relationship has been done many times in animated films, with a character starting off hating and whining about someone they don't like, then they become the best of friends.And did Mary steal Peter's cats at the end? Did she ask to keep them? Because she drew a picture about her family and even the cats were included. I hope not.At least the dub was pretty good, the characters actually sounded British instead of Americans.There were too many rehashes to other Ghibli movies, in certain parts, the movie has scenes that recall Spirited and Howl's Moving Castle for example. I think it's time to do something new. I know it's by Ghibli animators but they shouldn't be making recalls to their older films. It just makes an already cliched film feel repetitive.I couldn't find many positive things about this movie. I did like the fantastical elements and the action but that was about it. The film was silly and predictable, I feel that a younger audience would appreciate it but adults would probably feel it's childish. 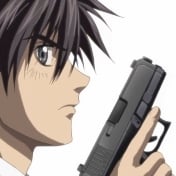 Note: The following is a brief reflection of my personal feelings on the film rather than a comprehensive review. Having just watched Mary and the Witch's Flower I find myself leaving the experience feeling quite disappointed. When I first heard about the film I was quite excited at the prospect of the newly created Studio Ponoc taking up the mantle of Studio Ghibli and creating a brand new work of a similar style and subject matter. The trailer made the film look fantastic; however, the trailer itself turned out to be more fantastic than the movie. In hindsight I realise that I should have kept my expectations in check since it turned out that the film was directed by Hiromasa Yonebayashi whose previous film The Secret of Arriety I also had a uninspired experience with. When I look back on both films I realise that despite both being beautifully animated, they suffer from similar issues, such as poor pacing, less than stellar storytelling, unremarkable sound and bland characters with superficial personalities lacking in any sort of complexity or depth. The story follows Mary Smith (one of the dullest names you could possibly thing of), a young girl bored out of her mind in a small country town in the last week of her summer holiday before school starts. Whilst meandering around the countryside trying to pass the time she follows a stray cat into the woods and finds a glowing magical flower and an old broomstick. Shortly after this discovery, the broomstick comes to life and whisks her away into the sky only to stumble upon a hidden magical academy for witches. While this introduction seems like an easy thing to execute whilst keeping the audience engaged, Mary and the Witch's Flower achieves in making what should be a routine setup to the story feel like an eternity. Instead of efficiently moving through these events in order to get to magical witch academy where the plot should gain momentum, we're stuck being introduced to unneccessary characters who end up having seemingly no impact on the outcome of the story, and watching Mary play this all out at an  excruciatingly slow pace. The audience knows that something magical is going to happen to Mary, spending what felt like forty minutes on something that could easily be achieved in ten is a colossal waste of everyone's time and not an effective way to get them invested in the story. This issue with pacing is rife throughout the film, making a one hour and forty minute film feel like three hours, causing the audience to be constantly hoping that the film would just hurry up and get to the point from start to finish. Apart from the pacing of the film, the story structure is also fundamentally flawed. Events seem to occur in succession in an uninteresting and plain manner, and while there is nothing wrong with the plot points in particular, the way that they unfold lacks any sort of uniqueness or character. Things just happen in an unremarkable way and as audience member I find myself simply bored. Overall, the basic layout of the story could have been made into a watchable movie, however the way that it ends up being told leaves much to be desired.The characters in Mary and the Witch's Flower all share the same problem of being overly superficial and completely devoid of any sort of depth. Mary, the main character of the film, fails to be likable or of interest to the audience in any way.  She becomes a magical witch, but we the audience don't like or care for her in the slightest. She has a thin personality with almost no redeeming qualities, and by the end of the film hasn't seemed to have grown in any informed or meaningful way. The same could be said about all of the characters in the film. Despite the likes of Kate Winslet and Jim Broadbent providing decent voice acting in the english dub, their efforts cannot save the shallow surface level characters that are rife throughout the film. Whilst so far I have only passed harsh critiscms on why I greatly disliked the film, I must give credit to the high quality animation and backgrounds that Studio Ponoc have created, which is on par with the excellent animation of previous Ghibli efforts like Arriety. Although I must still note that the great animation is not enough to save the film.Sound can be an easily overlooked aspect of films, however when you're film has been created by veterans of Studio Ghibli both sound and music must be of highest quality to meet audience expectations. Mary and the Witch's Flower only manages passing grade in terms of sound and music, being merely adequate enough to not create offence. It is a tall order and somewhat unfair to be compared to the likes of Joe Hisiashi, a master of composition and half the reason why Hayao Miyazaki's films were as good as they were; the truth of the matter is that if your film is going to be compared to the likes of Studio Ghibli this sort of comparison is unavoidable.  In conclusion, I very much wanted to enjoy Mary and the Witch's Flower and for it to be a good film, however it fails to be one due to it's sub-standard storytelling ,pacing and thin characters. If you want a great Ghibli experience, you're better off watching one of the classics.