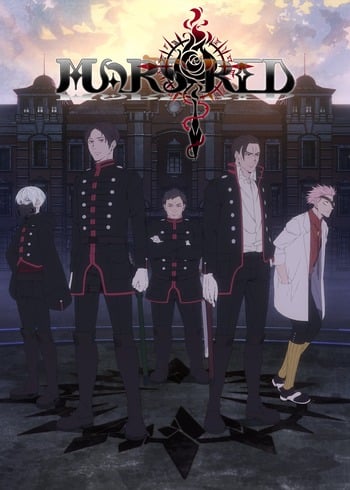 I honestly enjoyed watching this show. I liked the characters and they all had their looks on their side, hehe. The show started out relatively slow, and my first impression was not good. I felt like the art style was all wrong, and it was kind of unnatural to me. I ended up sticking with the show, and against all odds, I ended up loving the art style and the colours that has been used. For the record; I also cried several times, because it was actually really sad. The intro and outro were also very good and catchy :D I reccomend this show if you like the more historical animes, lots of vampires and hot men (and women) ;)

It was a great anime. Taishō era with a decent sociaty and vampires. But there is more than that. Love, loneliness, tring to live an endless life, tring to adapt and acapt that one's humanity was lost forever, leaving behind old life and precious people just to watch them from distance. Aome are blinded by their goals and some just hesistate between what shall be done and what one's want to do. World is changing and everyone try their best to live even when everything turns to chaos, because after this a new day always comes and the sun rises again. Each of character is different, each of them is interesting. This anime is realy deep and it feels somehow nostlagic. It wasn't overdramatic. It didn't had a moments like- now you should cry or Oh this is a tragedy look at it! All the feelings that I had during this series camed natural, no words or no others cries were needed to fell the heaviness and a ,,hole in heart". The theather part and the play were just wonderfull. I have never thought that a perfomance in anime can be so good and heart touching.

Just try. Maybe it is just watch you needed.

This is a tale about humans and vampires. Taishou Romantism: the blooming era. Ladies and gentlemen chat in cafes about the avant-garde and other European trends. But this tranquil lifestyle is destroyed, when vampires start to randomly attack the living. The government of Japan has known about their existence for some time now, but now that these creatures start their hunt against the humanity, the Japanese government creates "Code Zero," a corps that is created to get rid of the bloodthirsty undead.

One important thing for me to direct your attention to is that the creator of this anime, Bun-O Fujisawa, is actually a playwright by trade, so this gives you a vague understanding of what to expect. Anyways, MARS RED began as a stage reading, then it got a manga adaptation and then we got the anime. Because of that, obviously, the writing of MARS RED is on the highest level possible and right from the first episode of this anime the viewer can imagine themselves watching a theater play rather than watching some anime,  with characters actively quoting a one-act tragedy by Oscar Wilde and more.

Mars Red is really a unique gem-- the viewer does not get immediately all the details on the vampire situation; rather just collecting small pieces of information one by one. Many things are but a huge mystery, but it is known that the general population is well aware about vampires. Vampirism is considered an infection and spread by “true” vampires, and the afflicted have a stigmata on their tongue. Of course, to fight evil, you are to become evil, so the government of Japan uses vampires to fight vampires, which is the main focus of the anime’s storyline.

All in all, of course, I wish it had a better animation, which would make it even a more enjoyable watch than it is, but it is not really that much of a problem for the viewer to get used to. Definitely, a very unique gem to savor that instead of using overused clichés about ghouls and vampires, makes a whole new world, with amazing writing and quite interesting characters.

Mars red is a show that doesn't have a single instant of Mars in it 0/10, but it does have a lot of red and when I say red I mean blood and not in the edgy gore way but in the melodramtic vampire way. Yes this is a Shakespearean vampire show, based in Japan with the British empire in it.... it's kind of bloated. And it's kind of hard to recommend in terms of quality it's a good c+/b but the story is like I said melodramatic and the first half is certainly stronger than the second. So if you give it the 3/4 episode test and you aren't to sure about it then drop it there are certainly more interesting and fun dark(non edgey) /serious anime's to watch. Alright that's the short review for those more curious here's the non spoiler detailed review

first the animation, I do enjoy when a show has a different style but what the lost was smoothness in animation fight scenes are choppy or they go lazy and do the whole standing still and fighting freeze frames and fast whooshes.

the characters are actually enjoyable and are interesting to watch, other than the cliched stone cold military man and mustache leader guy.  I would say the psycho doctor but as the show progresses he becomes much better.

now the story first for a show trying to be so grand and epic 13 epsidoes for a multiple arcs going on at one time just simply isn't enough and around the turning point of the show they lost me on some parts and i has to binge the last 5 episodes and still couldn't figure out what had happened for a few parts. Also some characters are just completely unnecessary in my opinion , and it felt like they were just there to add this  Shakespearean style of drama that could've been better used for plot explanation, core character development, or just more time with the core cast. Final note for the story I can say though that it had some pretty decent closure I didn't feel empty or wanting more I was definitely satisfied with the ending which is great really

now that's not to say the show is bad its interesting if your willing to sift through the inconsistent pacing but if your looking for something more worth while then there are a plethora of options. That's really all I have to say so for those that made it this far thanks for the read and if you decide to stick with Mars red enjoy the show and have a good day!

I don’t really know where to start with this, I guess it a historical anime that tries to be realistic about if vampires were a thing back then. It’s a decent approach I guess, because if vampires were real, the army would 100% try to make use of them. Main problem of the story is its pace. It’s all over the place but mostly on the slow side of things, especially at the beginning of the show, when the show has to hook you in, it just fails miserably and passes out as completely boring and uninteresting, while it is not that bad if you decide to stick with it. Weather you end up liking or not you still gottta applaud the show for trying. It tried a different take on vampires instead of following the usual told a thousand times stuff. It also tried to be a bit more artistic, there is something to it, some weird camera angles, some patterns, a subtle thematic going with lines from famous plays, yes it is not perfect, it can seem pretentious at times, boring sometimes, but I commend them for trying something like that and not making one of the same true and tested recipes. Now, hearing all these you would assume that the story is nice, well no, even though there is some nice storytelling at times (Spoiler: like the two circles on the floor in the last episodes where they both died), and there is some effort behind it, the story as whole is very lacklusting, especially towards the end of the show shit goes really south ruining whatever hopes you had for it.

Characters while they are alright at a basic level, not much development going on and you end up not really caring about anyone else other than Maeda who is really bad ass and cool and when you get two episodes in a row when he doesn’t appear you are really bored to death. Then as the story progresses he kinda disappears and the rest of the cast is just too weak to keep the show up. You do get some background for them, it doesn't end up mattering much as they are not very complex characters, there is not any kind of collision between ideals and such, even if it’s very obvious that there could and should be. On another note the characters know from heart lines from Shakespeare and Oscar Wilde, they are very well educated it seems cause you see I have a degree in theatre studies and fuck me I can’t hold a candle to them, these guyz are nuts!!

Animation, in terms of quality is really poor, but in terms of art style and aesthetics it’s very nice. It has this old cinema movie filter kind of, a weird art style, but all in all it works, it fits the tone of the show perfectly and it really looks better than it should, cause they probably were on a very tight budget. It really shows in the few fights that there are in the show, like a couple of frames and that's all. It gets a pass though purely based on art style.

Sound is great, the tracks are nice, they fit the tone of the show, opening is great, but, the ending is horrendous I just couldn’t press the skip next button fast enough. Voice acting is alright, Maeda’s and Yamagami’s voice actors (beside being very good ofc) they also fit perfectly, the rest of the cast while they are doing a fine job, nothings stands out.

So, is it worth a watch? Meh, not really unfortunately it isn’t. It is not horrible but story and characters really let you down at the end. The premise was alright, some nice story telling at times, I applaud the effort and its style, but the end result was not that great. If you like vampires though you can give this shot, or even if you don’t like you can at least check this out for its aesthetics, but I can’t recommend it as a good show.