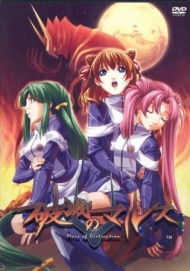 In the year 2010 the Mars Exploration Vessel, returning to tell its secrets, fell to the Earth in a fiery blaze. Several months later, strange creatures known as Ancients walk the streets of Tokyo, brutally murdering anyone who gets in their way. In response to these incidents, the AAST – the Anti unidentified Ancients Special Team – has been created to subdue the threat. With the help of Hinata Takeru, a high school student who wears the Anti-Ancient Suit Mars, the AAST now sets out on a new mission: deliver the salvaged pieces of the fallen vessel into safe hands, at all costs!

Ahh, Mars of Destruction. Something you must see to believe. Something you wouldn't ever believe to be possible outside of the realm of LEGEND. Something your mind will initially refuse to register as true, and then shiver with a flow of many different and conflicting emotions. And you totally should watch it.STORY: 1.5/10What little can be understood of the plot is: some starship somehow went "kaboom" while delivering something from Mars, then some big ugly things called "Ancients" appear to be attacking randomly in Japan and there are some (probably underage, and seemingly retarded) girls and a lad in a cool suit fighting them. Everything is told so confusingly and superficially and with so many clichés that at no point will you care for the story. Not a single element has not been already seen a billion times. It's not only stupid and confusing, but at times even contradictory, and you can see that it actually takes itself seriously by trying to be too many things for a low-budget 20-minute OVA and not even once showing any tongue-in-cheek attidude. The cornerstone to understand what masterpiece of clumsiness we're in front of is actually the finale. I'm not going to spoil it, because it's a key element to fully experience how bad this thing is, I'll just say that it will give you one of three reactions: you will burst out laughing, burst out crying, or check what the hell was in that drink you just had because such a cheap, lame and out-of-the-blue plot twist can't possibly be anything but a result of mental alteration. Needless to say, none was the inteded effect. As the revelation approaches, you can basically see popping up on screen a roulette spinning between "I am your father!", "It was Earth all along!", "You are one of us too!", "WE are the Earthlings!" and "It was his sled!".I'm still wondering if they thought they were smart or touching. I read that it's supposed to be a tie-in for an action / dating sim Playstation2 videogame, but still it's not enough of an excuse. CHARACTERS: 0/10Calling these characters "bidimensional" would mean giving them one or two dimensions more than what they have. No, I would go as far as saying that THERE ARE NO CHARACTERS. Basically only two or three of them are named, nobody at all has even a hint of any personality (AT ALL!), and the only scene that could be considered character exploration (through some inhuman stretch of the term) is a 20-second flashback dialogue taken bodily from the first episode of Evangelion. If that was supposed to make us sympathise with him, it failed pretty hard. Actually, giving a crap about any single one of the characters is basically impossible: so flat and non-existent are their personalities, and so stupid are their actions, that you'll either hate them or simply not notice they're there at all. Again, it's a tie-in for a game, so I don't know how those characters are developed there, but this is the impression received from the OVA alone. ANIMATION: 1.5/10This is probably the best aspect of the anime, and this says a lot. The character design is dull, the animations are cheap and terrible, and some shots will make you burst out into laughter. Unintentionally, of course.  Still I have to admit, the design of the protagonist's suit is pretty badass. MUSIC: 0.5/10There is little to no soundtrack, but after hearing what little there is, you wish there was none at all. Because it's pretty painful to hear short extracts of beautiful pieces of classical music (like Wagner's "Ride of the Valkyries", Rossini's ouverture from "The barber of Seville" or Beethoven's "Moonlight sonata") used absolutely randomly. Used like they are, in no way do they help conveying any feeling, on the contrary they distract from the scene, expecially since each one of them cuts abruptly followed immediatly by the next one. CAST: 0/10You know when, hearing a performance, you can visualise the face of the voice actor in a proud pose with the caption "And not a single fuck was given that day" above them? That's this anime. The voice actors are not even TRYING to convey any emotion, they just... didn't give a damn. Again, there's one or two times where you'll burst out laughing. OVERALL: 0.7/10Overall? Overall, you MUST see this shit. Everything about this OVA is so awful, so unbelievably stupid, cheap, and hastily put together, that you MUST try it out. It's something along the lines of those movies, like The room or Turkish Rambo or Avatar, that are so bad and full of the stupidest clichès, that watching them with a couple of friends and some alcoholic beverage becomes an enjoyable and ultimately unforgettable experienceof laughter. If the voice actors had been more over-the-top and hammy instead of flat and boring, it could have been a damn masterpiece.

Surprisingly, whoever approved of Tenkuu Danzai Skelter+Heaven thought that it was a great idea, and decided to do it again with Mars of Destruction. And it was only released a mere seven months after Tenkuu Danzai Skelter+Heaven. And after doing some reading into how this was made, it seems both Skelter+Heaven and Mars of Destruction seem to overlap in how they came to be. The plot, what little there is, starts soon after a space shuttle returns from a mission to Mars in the far off year of 2010 ends up being destroyed in the Earth's atmosphere. Soon afterwards, strange monsters called "Ancients" began to appear around Tokyo. A group of specialists taught to fight the Ancients must stop them before they destroy the human race. And just like Skelter+Heaven, the plot in this is confusing if you don't know about or haven't played the visual novel. And unlike Skelter+Heaven, which seemed to be original animation, this OVA is a compilation of all the animated cutscenes from the game it's based on. The company behind the game, Idea Factory, thought that it was a good idea to take the games animated cutscenes and slap them onto a DVD. If this was an unlockable in the game, or was a DVD that came with the Special Edition of the game in a higher resolution so that fans could enjoy them, this wouldn't have had the infamous reception that it got. But having it's own DVD release? Why? As a promotional tool for the game, it isn't very good. The scenes aren't even edited together well, looking like a compilation that some random person would have put together in 2007 for their YouTube channel. And top top the whole thing off, the OVA has poorly rendered classical music put over it. I'm assuming that this was release as a cash grab for fans to eat up, but there could have been a better way, like the previously mention possiblity for a Special Edition of the game. Somehow, the animation is both better and worse than Tenkuu Danzai Skelter+Heaven. Better in that there are more frames of animation and the characters overall look better, but the perspective is complete trash. There was even one instance where a character turns around, but their perspective suddenly changes half way through. I would say that it's so poorly animated that you have to wonder how no one noticed how bad it looks, but I imagine the budget and constraints probably didn't allow for a second pass. Since this thing is a compilation of cutscenes, 95% of the plot is missing, so yet again I had to do some research into what the game was about. And just like Skelter+Heaven, this is an Evangelion rip-off, right down to the main character having a father that forced him into fighting giant monsters in a mech. I don't know how you rip-off Evangelion twice, because not only are you competing with something much better with Evangelion, but you're just competing with yourself, and whoever bought this because they liked the other game, they're going to noticed the similarities right off the bat. Everything else about the PS2 game just makes it seem like your standard visual novel. I don't speak or read Japanese, so I can't exactly attest to it's quality, but I imagine that it at least fleshed out the story more than in the OVA, even if the quality seems off. But from the plot description and the fact that this is an Evangelion rip-off, I think I know what to expect from the plot. Just like Tenkuu Danzai Skelter+Heaven, this one is just painful watch. It isn't even funny bad like a lot of other infamously awful anime. If it weren't for that that this was less than 20 minutes, I probably would have never even bothered. Avoid at all costs.