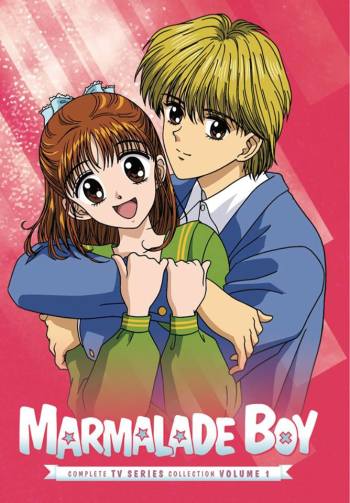 I just finished watching Marmalade Boy and I am not very thrilled about it. I got to episode 43 and then skip some until 73-76 to see the ending. The reason? The anime had too many episodes and the plot was dragging so much that it was no longer fun to watch. The plot is basically a soap opera in itself. There is a lot of drama in between and the story line offers no originality. The name of the anime is kind of stupid in my opinion as there is one reference to it in the first few episodes and that is all.

The animation was poor. I suppose it was well done back in the 1990’s when it was released but considering that now it has been over 20 years I see many flaws and roughness with the drawing. The music selection for the opening and ending themes did not impress me either.

The characters tend to be a redeeming quality for anime that do not offer much else in terms of story plot or animation but this was not the case. The main male character was the typical popular boy that is basically good in everything he does while his counterpart Miki is a bit of a klutz, emotional type girl who by the way is bad at cooking. I mean, the personalities of the characters are just not original and offer no depth.  I did like that the story had several other secondary characters whose stories are also explored but I did not feel their personalities where sufficient to add to the quality of this anime.

All in all, I do not recommend this to anyone and trust me, I have watched a lot of shoujo!

Possibly the most ridiculous drama you will ever see, Marmalade boy.  I'm currently rewatching it for the second time, and 'why?' you may ask, given my less than stellar rating review.  Honestly this series is pretty...meh.  The animation is truly old school, the main character Miki is weak and sets the woman's lib movement back decades even considering this anime is almost twenty years old.  Actually Miki's a right mean little thing, leading all these boys on, running away in tears at EVERY opportunity.  If I met this chick, I'd hate her.

The reason this drawn out old school series is worth a second watch is this: it's actually kind of funny, and definitely full of surprises.  It's been a while since I saw it and I find myself gasping out loud with the soap opera style plot twists and turns.  You'll find yourself with your mouth hanging open clicking for the next episode, and the next, and the next.

I found myself rather addicted to this anime, couldn't  wait to see what happened next. However the end was rather confusing and disappointing. After draging out the anime so much you would think the ending would be less dissappointing.

This love story makes you believe in love again ! Absolutely beautiful love it so much !!

The premis of this show was hilerious. When my friends and I saw the first two episodes we could not stop laughing, that I went out and bought the whole seiris the next day. That weekend Had all my girlfriends come over for a marmalade boy marathon. Bad move, By the end we were so sick of the show, and the movie is just a retelling of the seiries from the dudes point of view. I can no longer remember if this was really that good of a show or if we just watched it completly wrong, and ruined it for ourselves but that is how i feel about it now.