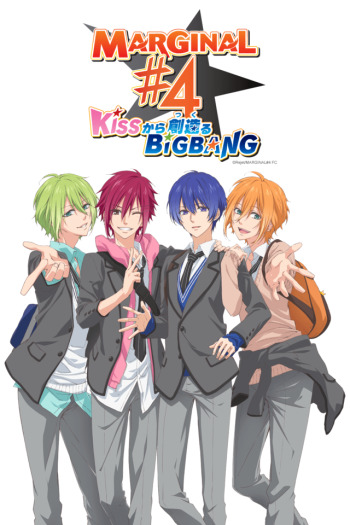 Before jumping into everything and all, I'm just a big fan of those kind of anime, not a reverse harem, there are idols and their life in general, out of work and everyhting, so I can't really say that in those kind of anime, there are much story, just like, part of their lives, so, personally, the story isn't really took into consideration, because as said, there isn't really developpment, besides of their careers evolving and their growing influence.

So, with that said, let's jump right into it !

So, as said, it's rather hard to rate an idol anime by its story, but, it is possible ! So, here goes four teenagers all 17, forming a group called MARGINAL#4, and they have a debut stage and blabla. Then, we jump into their school life, at an all-boys school. Their senpais from Pythagoras Productions (called Lagrange Point, and I kinda cringe whenever I hear it), help them, while their kouhais (Unicorn Jr, I also be like, there's supposed to be an "s" but whatever) are trying to rival with them. With that, we just get into what they really think, and the point of view of other units.

So, with that, there are some fights (like one... but it's still ongoing as I'm writing this, so it doesn't count), and it's really cute to watch. High school students in their daily lives doing some things and all (with the gay ships the fujoshis have at ever end of episodes). I just think it's adorable and cringe (more like all episode 6), and they're all so cute and all !

As expected of an idol anime, there is much time spent on the drawing of their appearance, because no (or not) fangirls/boys watch ugly characters into action, right ? There is also very much beautiful sceneries in it, shown in the first episode, and much more episodes ! When they go onto the stage it becomes a stage full of wonders (like the starclusters) ! I just enjoy looking at sceneries without any of the characters !

As for the sounds, I'm not the kind of person to really listen to them, but then... comes the concerts. Will you be able to believe it ? MARGINAL#4 became my favourite group after listening to their Debut Stage in episode 1. Hyakumankai no Ai Revolution, just hit into my "kokoro" and I fell in love immediately, it was purely wonderful and amazing (well, for me) ! The endings change in every episode ! You gtet more wonders every Thursdays (until it's finished...) !

The group MARGINAL#4 was created back in 2013 ! Just imagine.

For an idol anime, you have to create attracting and loving characters or the fans will just get bored watching it, and then, drop it. So, all the characters are just cute (like R, L, Tsubasa and Teruma), or be handsome (hello, fangirls) like Shy or Kira, Alto, Rui and Atom. They all have different personnalities (though Rui and Alto are kinda similar) and all are very charming in their own sense !

So that was my review of MARGINAL#4: KISS KARA TSUKURU BIG BANG (no idea what it actually means), I hope that it kinda helped you (because I know very well it's very much shitty) ! Thank you for the time you spent reading my review (which you should not have, because I know in fact that it was a waste of time, but still. I passed some time with it) ! Sorry if there are any errors !