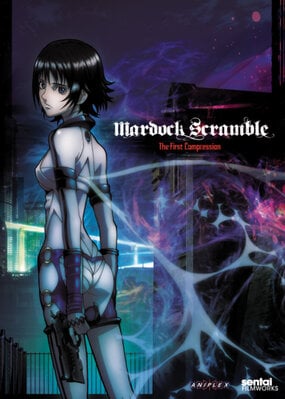 (Spoiler Free maybe) Mardock Scramble: The First Compression is a... interesting addition to my watched list, and while I rated it a 5/5 star for enjoyment, it is a show far from being said rating in terms of technical aspects.  Story The story is futuristic in nature and relies heavily on made up lore, technological advances, and other world building elements and while it does a great job setting up a unique backdrop with pretty aesthetic. the story itself has points of questionable decision making and hard to follow exposition about the world and lore, though what series with its own world and logic doesn't suffer from this eventually. That's not to say I was totally isolated, and it does the job at having memorable moments, but these moments are not constructs of the plot itself being clever or unique but stems from the characters. Animation Mardock at its core revels in its animation which at times can be a masterful work of art. It knows its weakness and plays around them excellently remaining visually stunning and accurately portraying mood and emotion throughout its atmosphere.  I must also commend Mardock on its use of nudity and sex, at least in the directors cut. While some may write this off as fan service and be disgusted with such indecency from Balot, I feel it gives her a more emotional touch to her characterization and mood. Showing you how deprived, worthless, or vulnerable she is. Sound The sound, or lack thereof, was decent, though I must express my love for the opening and ending songs as my favorite from the movie and series. However, everything else I would define as "in the moment" music befitting the scene at play but outside of said scene is forgettable. voice acting on the Japanese side I believe was superb, very good deliver. I will rewatch in English on a later date though upon initial testing to choose between English or Japanese I found the Japanese to be of better quality.  Characters I have no shame in admitting I have a soft spot for the mentally tortured, and delving deep into the philosophical dwellings of one or more characters' mind. To explain the characters, or at the very least the two protagonists, Oeufcoque and Balot, I must explain the theme. Mardock Scramble is a story of finding oneself, finding one's purpose, their reasoning for life, what drives them to the bitter end. Are you a tool, a weapon, a person, a lover, or perhaps a shell? What is your worth and how far are you willing to go prove it? This theme makes Oeufoque and Balot very alike, perhaps not in attitude or personality, but fundamentally at their core. They are a very dynamic duo growing individually and together; hoping to find a reason to exist.  The other characters I had no quarrel with and found some to be quirky and bewildering, which I will admit, charms me.  Thoughts I could do a more in-depth slightly spoiler review like I did with Flip Flappers, though I don't believe this to be necessary for I thoroughly enjoyed the film and see no reason to break down scene for scene why I love the dark mood, or intricate character motives; that can be someone elses job for now.  A warning though is in order, if you wish to watch this movie it is best to have all three films for the first film ends on a cliffhanger (But Daimyo you just spoiled the ending!) trust me even now knowing that it ends on a cliffhanger you won't be expecting it when it happens. I watched the film knowing about the cliffhanger and was surprised when it happen and bursted out laughing at the screen, its that ridiculous, but I still enjoyed it and won't deduct points from my 5/5, can't say the same for story rating though.  Maybe I'll get around to "reviewing" the second movie, which i've already watched, but its more or less the same as what I stated here but with the "Plot Thickens" stamped all over. I might wait until the third film before reviewing the series as a whole.

"I wish I was dead..." Spoken by 15-year old prostitute Rune Balot, these first words set the dispirited tone of the anime movie trilogy Mardock Scramble. The story is set in Mardock City, a cyberpunk world where the skyline is filled with skyscrapers, cars glide on fluorescent green roads, and everything sparkles like champagne. It's a stunning place to look at, but it’s also a savage place where cruelty and crime are often left unpunished. Homicide has become so rampant that the government has authorized a controversial procedure to resurrect victims from the dead to help track down and testify against their assailants. This is one of the several unusual, and perhaps implausible, concepts in Mardock Scramble, but it's presented with such conviction that it’s not too difficult to get caught up in the moment and suspend disbelief. The central plot-line, which is essentially about Rune’s revenge, is likely a catalyst for weightier themes. There are some fantastical action sequences, but the series tends to be more of a character study than a typical action-adventure. The conversations are philosophical, covering a wide range of topics such as the nature of memories and regret, free will, finding a purpose in life, and rebirth. There’s a lot of hidden symbolism to keep your mind busy if you choose to look for it—such as the egg references that frequently appear. The doctor who performs the resurrection procedure is named Dr. Easter; "scramble" is, of course, one of the ways in which eggs are cooked; and there's a yellow shapeshifting mouse named “Oeufcoque”, which is French for “soft-boiled egg.” What all these egg references mean, I’m not sure. Mardock Scramble has a consistently abrasive aesthetic. The art is usually intensely bright, or shrouded in shadows, or textured by noise that must've been hell for the video encoders to deal with. GoHands doesn't appear to have cut any corners or expenses with the animation, which, especially in the action sequences, looks painstakingly detailed. The visuals are rounded off with an electronic and ambient music soundtrack. If you like science-fiction fantasy with a psychological twist, strong and stylish animation, and don't mind graphic violence, mental and physical abuse, and nudity, you should definitely check out Mardock Scramble. If you haven't read the synopsis yet, don't. The less you know going in, the more surprised you’ll be. Just sit back and get pounced by it. 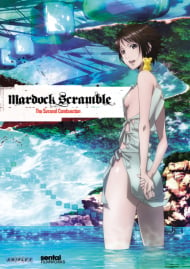 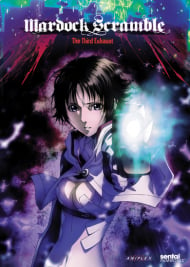 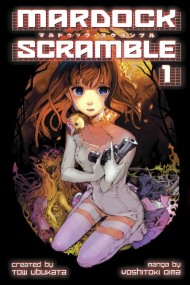