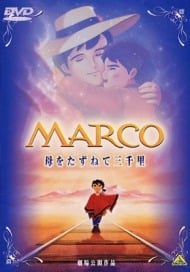 In the poverty stricken city of Genoa, Italy, a young man named Marco's mother departs for Argentina, where she can work to help support her family. One year after her departure, Marco still lives in Genoa with his physician father and handful of friends, and misses his mother terribly. When her usual letter fails to arrive, Marco decides to do something drastic -- go alone to Argentina to find her! With only a small amount of money and no one to turn to, this brave little boy sets off on an adventure through continents, storms and treachery, all for a chance to see his mother again...

StoryThe tale of a young man named Marco began when his mother left for Argentina from Italy . This is never really explained in the movie, but after reading other websites and reviews for the related "3,000 Leagues in Search of Mother", I came to understand that Italy went through a depression and its inhabitants often immigrated to other countries to support their families. That being said, Marco’s mother did this as well, leaving a very sad little boy behind. After he fails to receive a usual letter from her, he decides to set off on his own to find her, and that’s a very long distance indeed. Marco is definitely a tale for children, and is aimed at a younger age group. It has hints of Ghibli or specific movies such as Dog of Flanders, as well as others. Normally, I would have thought the plot was a bit unoriginal: boy traverses over long distances through a variety of situations (including being pickpocketed, homeless, and without friends or family), to reach a goal. I think what made Marco more interesting is the strong base of his Italian ancestry. In one town, Marco is without money or a place to go, and manages to have money raised for a train ticket by random strangers in a pub â€“ all because they share his Italian ancestry. In addition, I haven’t seen too many anime series or movies that are based in South America specifically, so this made for an interesting watch. In general, it talked about a period of history with a country that I knew not a lot about, so even for someone of my age group, it was educational at the least. So why such a high rating? I generally am uninterested in family oriented shows, since they don’t appeal to me. Marco wasn’t that much of an exception, but it still had these aspects I enjoyed, AND was definitely well written for the kiddies. Although older folks might not appreciate the dangers Marco has to face, younger kids would probably eat it up with a spoon. The plot might have been a bit generic, but still shone for its target audience nonetheless, hence the 8.5. AnimationWhile Marco’s animation style was nothing superb, it still was crisp, clean, and pretty to look at. Character designs seemed similar to Dog of Flanders or other older family type shows, with very simple shading and lines. Faces tended to be a variety of shapes and were usually very round or oval, one or the other. The clothing was very fitting for the time period, and the colors used in general were bright and vibrant, nothing offensive to the senses. Certain shots of scenery were breathtaking, such as the ship as it sailed through the harbor, the fog covered mountain filled with llamas, sunsets, or the slums at night in one of the towns he visited. It seemed the backgrounds and different city atmospheres were always carefully constructed and contained a great deal of detail. I never stopped once and thought "wow, this animation is plain!" The simple style really worked for the movie. No CG was used that I could find, and if it was, it was subtle and perfectly blended (because I didn’t notice). SoundThe audio was primarily orchestral, which would have been the only appropriate type for a family based piece that took place in the time it did. As with other movies of its class, the music was a great accompaniment to the plot, and fit nicely in the background. I docked the score mostly because while the music did fit, it wasn’t anything spectacular or unusual. I’ve heard this kind of music so many times that it really has to be something special to get a higher score. Voice acting was great all the way around, no one sounded unusual or out of place. CharactersThe characters of Marco definitely had their roles, and stuck to them. I dare to say that there wasn’t a great deal of character development because of these set roles, but at the same time, family type shows don’t necessarily need such a thing to be successful for their target audience. In this case, the happy-go-lucky and strong personas of all the characters (even the secondary ones) fit well and as always, are a good influence for younger viewers. Marco overcame all odds to go on a fantastic journey full of adventure, and lives to tell about it. He is the epitome of a good little boy, helping people along the way even when he can’t afford it, even when it inconveniences himself. Really, though, would it have been shown any other way in this kind of film? Predictable? Yes. Did it work? Yes, well enough to warrant a 7.5, though perhaps not as unique or deep enough as they could have been to deserve a higher score. OverallThis is another one of those scores that is probably a bit higher than my actual enjoyment level. I am not a child, and thus, it’s hard for me to rate these types of series based on my age. This 8 stems from knowing how the target audience (children) would accept this film, and I know it would be positive. Marco has a rich storyline full of happiness and adventure, is educational as to a time period we might not be familiar with, and has a feel-good type atmosphere to it, even during the "scary" or sad parts. If you have children, this would be a good thing to show to them. If you are an adult, probably only watch it if you are really looking for something sentimental that will remind you of things you used to see in your childhood. 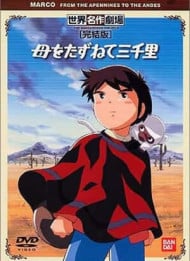 3000 Leagues in Search of Mother 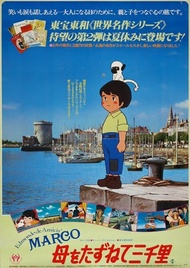 3000 Leagues in Search of Mother Movie

3000 Leagues in Search of Mother Specials