March Comes in like a Lion 2nd Season - Reviews 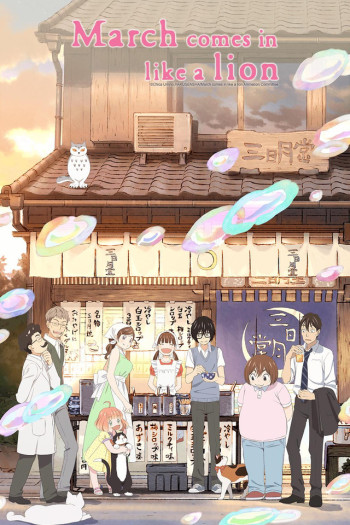 I have to say that season was much better than the first season. I really loved to story. Everything blends up so well, you get to know more about the characters especially Hina and Souya. You also get to see new sides of Kiriyama, and how he is developing.

The story is surprisingly intresting. So many stuff happens, and they are all well made.

I'm conflicted about this one. I immensely enjoyed the first season. But this second one...leaves me a lot less enthusiastic. It's still above average, don't get me worng, but in my opinion it's simply not as good as the first season. Even though I have only read glowing reviews about this, so I know many people don't agree.

I like and commend the production values, colours, character designs, backgrounds, music, voice actors...it's all extremely good. I find that the characters are very well portrayed and I fully share in the philosophy of life behind this anime. I like the realistic take on life, the way it shows how people are not only just good or bad but sometimes both, how you struggle to grow up, how bad things happen but how you can find motivation and strength to go on. How you can find some beauty in life - and hope - if you look hard enough. I liked how Rei's match with Souya didn't have the end you'd expect and neither did Shimada's one with old man Yanagihara. I liked how Rei is grown up and learnt to trust other people, enjoy companionship and sincerely yearn to help others. The characters are this anime's main strength. You cannot not admire Hinata's bravery, and same could be said for Nikaidou and Souya and Shimada.

What I didn't like is that it's really not about Rei anymore. Hina gets a lot of screen time and not only in the arc dedicated to her. There's a couple of episodes dedicated to Nikaidou and a couple to Shimada. Rei is often a side-character, trying his best to help others. The match between Rei and Souya is for me one of the highlights of this season, and Souya's character - as well as his interaction with Rei - is portrayed, once again, masterfully.

To me this season feels like a series of cameos of different characters, but with a plot that isn't heading in any clear direction once that we've been shown how Rei has overcome his issues from the previous season. I already know that lovers of slice-of-life will object to what I've just said. I guess what makes me unhappy lies in the comparison with the first season, where there most definetely was a plot that got me hooked, as well as the excellent characters and art. That's what's lacking, in my opinion, in this second season.

This anime has too much sentimental value to me. I saw myself in Kiriyama, and I saw how the people around him gave him happiness and hope. I saw how he immersed himself in Shogi, just like how I immerse myself in Chess, as an escape. The art style was authentic and stunning, alongside with the sound and animation. The story in itself was gradually paced but beautifully done, and the characters and their development was absolutely stellar. Please give this a watch, and I'm sure it'll also have a special place in your heart, similarly to how it does in mine.

I like this season way better than the first one, though it took me so long before I was able to finish this series. It talks about more serious topics like bullying and they handle it pretty well without putting a bad taste into your mouth and in the end it was very heartwarming. Would I watch it again, no but I did enjoy this series and should watch it at least once.

I was excited to watch this season because I kind of liked the first one and it may end up being one of my top ten anime. I started watching bits and pieces of this one and boy, was I disappointed. I watched up to episode 5 and then kind of just wanted to give up, especially after hearing about how dramatic this season gets. Okay, here comes my problems with this season.

They shifted the focus of Rei's point of view to Hina's. A lot of the season starts focusing on Hina and her reactions to the conflicts she encounters rather than Rei's. She encounters bullying during her third year of middle school and being the sweetheart she is, protects a girl named Chiho from it, who is like an acquaintance to her. But then the bullies start bullying her. Between her classmates bullying her and her friend moving away, Hina becomes depressed and solemn. This was inconsistent to the cheerful, easy-going, bubbly girl she was in the first season. It's like the writer ran out of ideas and started to make Hina's character similar to Rei's. She starts crying excessively, she has no friends, she is going through the trauma of bullying which is what Rei's character has been through. In episode 4, she cries even during moments that weren't even requiring that sort of drama such as the ladybug scene.

The bullying was really hard and sad to watch and I just wanted everything to be okay for Hina. I was wondering why nobody decided to home-school her or take her out of school, that may not fix the pain she felt after seeing Chiho off but it could fix the whole situation and the arc wouldn't have gone on as long as it did.