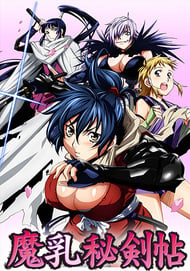 Story: When it starts up, you get a face full of light. Unless you're watching it properly, uncensored, and it's titties in it's tittirific glory. That's right, this shit's about tits, boobs, mammaries, nipples, magic of the titty kind, titty ninja's and a world governed by breast size. That right there, the titty magic and world boob government, are some of the best fucking concepts of this generation. Straight up it tells you the plot is about tits so any further showings of tits, cleavage, groping, molestation or sexual depraved deviency is all for the sake of plot. But the plot is shit, so why does that matter? It's about achieving the goal of eliminating the Titty government by using a legendary titty magic that grows titties, or something. Seriously, I shouldn't even try to explain it. It's shit, but it's tits, and that's what it's about. The titty magic, in the same hand, is some of the most batshit insane titty action I've ever seen and I watched Seikon no Qwaser with all the titty rape and sexual depravity. It gets to be so fucking absurd as the grand slam of episode 2 censored is a fucking light show. Episode 2. That fucking early. But I'm not being entirely fair. It's actually funny at times, mainly when it consists of Lord Boobs, or Feudal Pimp Mie, who brings about some of the best episodic events. Coincidentally, it leads to filler but what here isn't filler? The plot is so barebones along with it's overdose of shit that it tells you that the shit that's happening is barely plot-infused. Events that fit the parameters that consider it plotish. Plot? Filler? Who the fuck cares. Episodic episodes are fun for the most part but it's really stupid beyond reason. The action scenes can be quite good at times, especially Lord Boobs, that was the fucking best fight in this show. And know why the plot isn't scored lower? Simple; concept and titty magic. Breast Illusion was fucking insane. Shit man, all you can talk about for the plot is tits. Animation: Holy shit them titties, glistening and oiled up and we actually see them getting oiled up! Fuck yeah! If you want titties, this has them. This has big boobs, small boobs, saggy boobs, firm boobs, bouncy, ginormous, Eiken-sized, pillows, back breakers the whole cleavage. And it looks good. Everything else? Fuck that shit, you ain't here for that. Sound: Here, big points for the sound of boobs smacking on the chest. A few dozen times per episode and the usual moans of being fondled and molested. Good stuff. The OP was alright, the EP was a bit better, can't complain but the sound effects are top notch. Characters: Lord Boobs, that little feudal lord that created the greatest contest ever, is one of the best, most honest and most lordy of lords. He uses his power for tits and is a righteous figure in a titty world. And another for supporting, Ouka for being a total fox, rawr! Totally cool, despite being on the wrong side. Chifusa and her brother are pretty cool but everybody else I'm neutral with or at a mild dislike. It's more about tolerance here than depth because, you know, it's a titty anime. Overall: Why don't the scores add up? That's because the grading factor is horrendously biased. Plot? Tits. Animation? Tits. Sound? Titty slaps. Characters? Lord Mie. 3/4 categories focus on titties, with the last one being titties as well. Quite simply, you're going to watch this for titties and titty magic, not for plot, not for depth, not for any of that intelligent, decent shit that any good series has. This is titty time.

The story is a little hard to take seriously without slightly laughing from time to time. But if you're a lover of boobs this show's a real treat.

Again this is going to be one of those quick reviews considering again this is really early in the morning like 2 a.m. Pros: Boobs Cons: Quite one-dimensional. ~SPOILERS~ There definitely seems like there should have been a second season though it would have been more tits which isn't a bad thing there is quite a bit I am a tit guy but after a certain point of seeing constant tit on the screen it turns into about the story. The characters are one-dimensional. The sound, there is no sound other than me squish sound that everybody's tits make. Animation is actually really good like high-tier even A-level type status. The storyline was pretty interesting but about 10 episodes and it gets pretty boring and monotonous. Again I'm a little too tired to do a little bit better review but is it worth the watch sure again if you like tits go ahead but other than that it really holds no value as a series because it doesn't end properly it ends on a cliffhanger does her sister get tits back does her handmaiden get her tits back will she have any tits left over for herself and if you're reading this and you're like what the fuck is he talking about then go watch the goddamn anime and don't pussyfoot around my fucking review, good night. 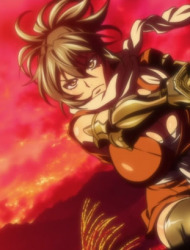 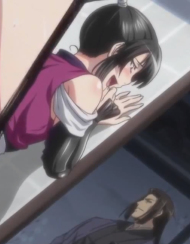 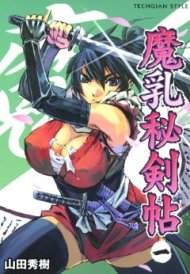