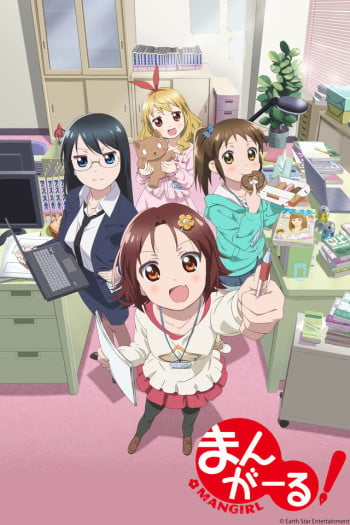 This short little anime is all about the manga industry from the editor's point of view.

Story: The story follows four women that have decided to launch a monthly manga anthology. The story mostly focuses on the struggles of an editor, like picking font style and size, helping mangakas find inspiration, and trying to get their product to sell. Because of the 3 minute episodes, there isn't a whole lot of time left for giving depth to the characters. But, if you want a simplistic look at what it's like to run a manga, this is a pretty quick run down.

Animation: The animation is crisp, bright, and enjoyable.

Character: Even without a whole lot of backstory, the characters are enjoyable to watch. I would have wished for some more depth to the girls, but the short episode lengths, this was ok.

Overall: I liked it. Cute, short, and funny.

When I found this series two things appealed to me: the short episodes and the idea of a making of of a manga in an anime. However, the series isn't rated too well, so I was a little hesitant to start watching, but I'm glad I did and I ranked de series 3 out of 5 stars and of course my review above.

The series is about four woman who make a monthly manga magazine. All the woman are completely different from each other, which make it fun to watch as they all have their funny sides. They're joied by a few other characters and among them some are recurring. The series shows a bit about the making of manga yet in a short period of time, so you get a global idea of what it means to make a manga. However, the making of a manga is the scenery of the pratagonist: humor. This series is very witty, fast and diverted so it's fun to watch and you don't get bored.

The title song may be irritating to some as the singing isn't that good and it could possibly repel some people, but just look through it and you'll see a great series. Furthermore, the rest of the sound during the series is alright, not worth mentioning in particular; it suits the series well. The voice acting is great and it suprises me how the voices match the characters.

I recommend this series to everyone who likes to watch a short anime, likes to laugh and wants to learn about the manga industry.