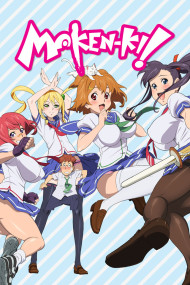 Takeru enrolled in Tenbi Academy because the girl-to-guy ratio is, like, 3 girls for every guy. But this bevy of bombshells is actually a school where teens beef up their combat skills using a magic power thingy called a Maken. Redheads with wicked high kicks, shocking blonde bullies, and aggressive brunettes are EVERYWHERE. And every time there’s a brawl, their clothes tend to disintegrate. Distracted by all the bouncy brawlers, Takeru has a hard time concentrating on his training. Things get sticky when the hornball can’t figure out how to use his Maken. If he doesn’t find his mojo quick, he’ll be dumped by the school of his dreams—or destroyed by an attacker who’s after his magic power thingy!

Story Maken-Ki isn't all that original. It relies very heavily on all of the cliches we're all tired of seeing beaten to death in shounen romantic comedies. Among the few redeeming qualities the story has are the action and the ecchi comedy. There are plenty of cool fight scenes to be had here, as well as hilarious pervert antics, if you're willing to overlook the laziness of the rest of the story. I can't give this story a good score just because it has its fair share of funny ecchi moments though, because that is basically mandatory for any anime which tries to be an ecchi romantic comedy. What do they want, a cookie?Animation If you're a fan of animated tits, you'll love the animation in Maken-Ki. It reminded me most of To Love-Ru, which is arguably the best when it comes to ecchi animation. This is pretty much the only thing that makes the girls in this, despite their shallow character, still endearing to the viewer and prevents the whole thing from being one giant steaming turd.Sound Nothing special here. The opening theme is meh, the closing theme is meh, and there isn't really anything memorable about the voice acting or music in the actual episodes. Characters This is the weakest point of this show, and is mainly what brings the story down so hard. There is one cliche in this that trivializes the two biggest female characters in this show and makes them nothing more than walking pairs of tits: "the childhood friend". It is hard to find lazier character development than explaining a girl's feelings for the protagonist by saying "oh Takeru and Inaho made a promise when they were kids and now he doesn't remember it" or endless flashbacks of childhood Takeru being heroic in front of Haruka. You know what? How about actually writing the story thats happening now and making the feelings she has for him now seem believable? How about making at least some effort towards not being like almost EVERY OTHER shounen rom-com out there? It wouldn't have been such a bother if they didn't do it to BOTH of his two primary love interests. How about fleshing out the story better from the get-go so that rather than these two girls having these feelings by default, they *gasp* develop along with the story just like a character should?Verdict: 5/10 If you're not expecting stellar story-telling, but just want to kick back and enjoy some flopping tits, dick and pussy jokes, then this show is exactly what you're in the mood for. If you're looking for well conceived characters and meaningful character development, then these aren't the droids you're looking for.

Story: Fun fact: 7/13 characters in the OP are busty, 2/13 are guys. A brief synopsis on the plot (As it's not up yet): A school with 2/3 of the population having large boobs, 1/3 having decent sized boobs and Himegami is turned into a co-ed school. This lucky bastard/nice guy Takeru goes there and meets up with his childhood friend, big breasted VP. He soon meets up with another big breasted girl who made some sort of childhood promise-of course it's marrage, all of them are in harems. No spoiler's here.Oh, and there's these Maken things, Takeru doesn't really have one to start with but he gets one later on, obviously. And a legend of some nine-tailed fox snake dragon but that isn't really important. Maken-Ki forsakes plot for fan-service, and if that isn't enough to convince you, the second episode will enscript it in concrete and stone. It's not particularly good, the tale it tells, but you aren't here for that. You're here for boobs, panty shots, fan-service, accidental perversion moments, bouncing, titties (Those are censored), boobs and the fights, which are quite good, all things considering, when they show up. We get some plot later on but it's horribly inconsistent at times, often going into some wacked out fan-service episode and then returning to it later on. And then there's the final two episodes with coincidences that are near facepalming and an ending that's so bad that it actually goes below expectations. Truly. But it does try, you have to give it points for that. Not much else to say apart from it's a harem, it's an ecchi and it has a panty shot tag. Draw your own conclusions.Animation: Nothing outstanding but it serves the ecchi well, from the obscenely hilarious bouncing of the enormous high school nurse to the rack of the principal and the infamous second episode; boobs. In large quantities and in large. The other factor, panty shots, are common and a respite from all the boobs for those who are a fan of those. Ass shots are there, not just panties.Everything else? Some of the combat animations; OP with their Maken powers comes to mind and is quite cool and the fights look nice. But the bouncing overall can get hilarious at times. And loved the red haired chick's kick to Takeru's mug in the EP, always makes me smile.Sound: The EP's kinda catchy and the OP's quite nice but nothing I would put on my MP3 Player. No qualms about the VO but Himegami gets the award for being the best.Characters: "Welcome to Whose Line Is It Anyway, the show where everything's made up and the points don't matter; that's right, the points are like depth in characters for a harem/ecchi boobfest." Chances are you aren't here for deep characters, which is good, as the ones here aren't deep but a lot are busty. The depth we do get is limited to the cliche stuff and with the main love triangle; the childhood friends. Otherwise, Himegami is the most fun; being all snarky, A-cup angsty and that natural charisma, with her trio of fanboys. The others either have their quirks, or a nice set, or that one-shot machine thing for a great moment. Hardly anything positive can be said but they aren't annoying at least. They do have their moments of complete stupidity that's so dumbfoundingly bad that it's head-to-desk worthy, and that's real bad in something like this. Astoundingly bad. Overall: It's crap. Truly, honestly, ecchi filth with an emphasis on fan-service, bouncing and some really bad moments; which is to say I enjoyed it. It's got boobs, panty shots, some good fights here and there, Himegami and nothing else. The end score doesn't mean that it's worth a watch; this is best left for those ecchi fans who don't mind a whole lot of boobage in their plot. All you others, you have better things to be watching.

I feel like I missed some episodes where a lot of information is given, where the system of powers is explained and where more battles are fought. The story is nicely conceived (sadly, it's not original, I think), but how it turned out is disappointing. The animation and the sound are both well done, I think, but I am not so satisfied with the main character. It seems like every few episodes, he changes his ideals and his personality. So that's why I give this anime a 5... 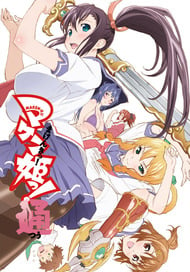 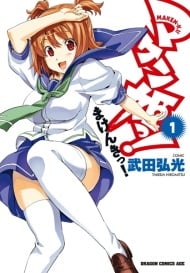 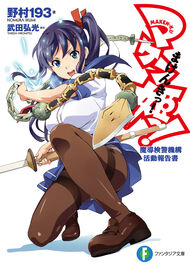 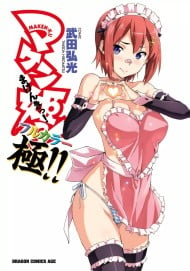