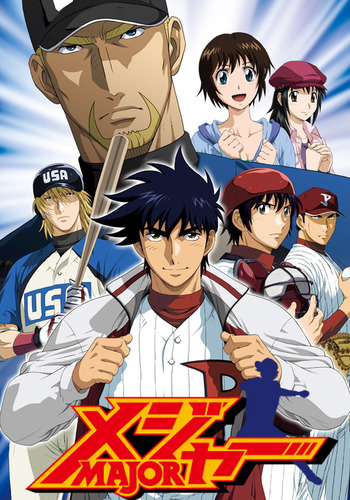 Anyone who has not watched the first season of Major is strongly discouraged from reading this review; the following discussion contains a major spoiler.

Ah, the sweet, bone-juddering sound of Major making a comeback! With the show now in its fifth season, Goro’s fastballs once again deliver a strikeout performance to leave his audience breathlessly shedding butch tears. Indeed, a substantial part of the gratification is simply relief that the show has rediscovered its natural rhythm.

As usual, Goro leads a team through various baseball trials on the pitch. However, there’s more at stake than previously, and not just in the context of the show. As well as facing the man responsible for his father’s death on the world stage with his nation’s pride on the line, he has to convince his viewers that this interminable series is still worth following. To cut to the chase, his success is unequivocal – as Goro sets out to prove once and for all that the Japanese can perform better than all the other nations at baseball, he delivers gut-ripping shounen action that’s both relentless and jump-out-of-my-seat stupendous. Goro and Toshiya’s on-pitch struggles through the middle episodes, particularly, include scenes so nail-bitingly tense that when I wasn't yelling insensible profanities at the screen, I was pausing the player to stop the from world spinning.

With that said, anyone hoping the show defaults back to the boyish drama of the first three seasons get ready for a learning curve. Goro has it particularly tough these days and his positive attitude doesn't always save him. Admittedly, this adult approach in Major S4 left me nostalgic for the brazen ‘go get ‘em’ treatment of Goro’s humble beginnings; in the context of stronger action, however, Major S5’s maturity merely opens up a new range of possible twists to keep fans coming back. After all, the broken bat became old a long time ago, and additional scenes of Goro recovering from supposedly incurable injuries would only elicit groans. Here, what count are the psychological strengths of the players in the face of significant disappointments. This mild refocusing of the narrative ensures that the show delivers genuine surprises even at this late stage as well as a more complex viewing experience.

Indeed, the story has grown up, but so has the animation! Finally, Major joins the rest of the market in the 21st century, pumping a well-deserved cut of the budget into the visuals to add the stylistic edge it was missing. Cue messianic upward shots of Goro smirking, wind in his hair, close-ups of his eyes, smoky wind effects, and a number of dramatic baseball poses to accent the action. Backgrounds also deliver in quality, with street signs, buildings, and water evincing commendable detail. Most importantly, S5 continues to uphold the spirit of baseball by offering liquid smooth action to make its cast move awesomely like real athletes.

‘Hey! Hey! Alright’ by Scha Dara Parr, a hip hop track of mellow cheer replacing the full throttle pop-rock of previous seasons, sets the tone nicely. It also caps off a highly successful soundtrack in general. S5’s score takes its cue from the movie Gekijouban Major, dispensing with the indistinct synthesised guitar solos of the previous seasons and replacing them with a diverse set of catchy numbers. Once again, the score’s main achievement is to bring to life the arena atmosphere – viewers will be moved as much by the militaristic drum rolls and pumping rock anthems as by any of the rousing speeches. There are still plenty of head-banging, fist-pumping beats to complement the macho activities on the pitch, but there are also lofty orchestral pieces and even revamped versions of old themes.

Goro struts onto the pitch accompanied by a cheesy rock riff, rattles off some precocious lines at his opponents, and BAM the magic starts to happen – that's how it used to be.

He’s not fighting primary school shmucks anymore; nowadays, its entire teams of pros with more fearsome baseball histories than his own. The problems on the pitch are more complex, more psychologically taxing, and the resolutions often require teamwork rather than a cure-all injection of Goro’s bravado. In the process, Goro’s naivete finally crumbles, leaving him with a stark appreciation for what must be for him a newfangled concept – fear. Indeed, these are similar emotional trials to those in S4, but his growing pains in S5 are executed to greater satisfaction. Moreover, rather than diminish Goro’s pathos, the team-based focus guarantees a more balanced spread of characters to get excited about. Po-faced Mayumura, for example, returns with a vengeance, proving during a stunning face-off with Gibson Junior that he’s as thrilling a performer as Goro himself.

Additionally, Toshiya’s traumatic family background resurfaces in a surprising and touching guise, Joe Gibson finally demonstrates why his pitches leave everyone eating dust, and even Goro’s little brother Shingo gets his moment in the limelight. Perhaps the weakest of the dramas, Goro and Shimizu’s romantic subplot sees them still dancing around each other, with one or two positive but inconsequential developments to keep their relationship simmering away. While always a welcome returnee to the main cast, Shimizu's role has become that of a beaten companion; time and time mistreated and ignored by Goro, I’m no longer sure what it is that’s meant to make them a believable couple. Luckily, this is also a minor plot strand – generally, the characters' personal developments are excellently handled, enhancing the emotional impact of what’s happening on the pitch.

For fans harbouring doubts about this series recovering from its uncharacteristically mediocre fourth season, Goro Shigeno will pulverise them in a hail of fastballs. It’s been long in the coming, but Major S5 finally proves the franchise still has a lot of love to give – with breathtaking action, gripping character development, and rousing stadium environments, no doubt its grateful fans will love it right back.