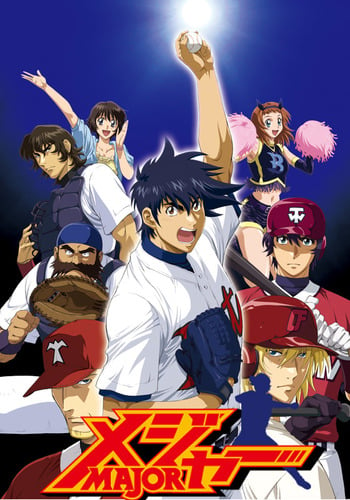 So you're watching Major and you think you've tasted the best that sports anime can offer? Think again! If you love Major, then Hajime no Ippo is a must-watch. With inspiring protagonists, tragic backgrounds, and an action-packed plot that never fails to give and is free of filler, you'll find Hajime no Ippo as gratifying (if not more so) as Major.

These are both superb anime that delve into the grit behind the world of sports. Immense character developement. Emotional, mental, AND physical adversity.

If you dont respect athletes now, youll learn to - but dont worry. Theres also a hell of a lot of humor thrown in to prevent you from blowing an aneurysm.

I highly recommend both.

You should definitely try One Outs next if you really like Major. One Outs has a fantastic protagonist as memorable and engaging as Goro. Except Toua Tokuchi is the complete opposite to Goro in that he's cynical, dark, and totally comfortable using sneaky methods to win. How he does this, though, is just as AWESOME as Goro at his most kick-arse. In short, One Outs is what you would get if you crossed Major with Death Note, and I think that should be recommendation enough.

After loving everything Major did, I cannot believe I almost missed out on Cross Game. Are you still twitching from that Post-Awesome Anime Depression? Miss that RAWR RAWR YEAH YEAH feeling and need a high to replace the one Major gave you? Then watch Cross Game. It's just as brilliant at developing nail-biting baseball games, combining it with heart-wrenching drama and marvellously involving character development for a thoroughly rousing experience.

If you really loved Major, you will enjoy Kuroko's Basketball for its equally consistent thrills. You'll notice that Kuroko's Basketball has less realism than Major, with more liberty taken with the special effects. However, it creates similarly charismatic leads who make you enjoy getting to know their individual personalities and rooting for them.